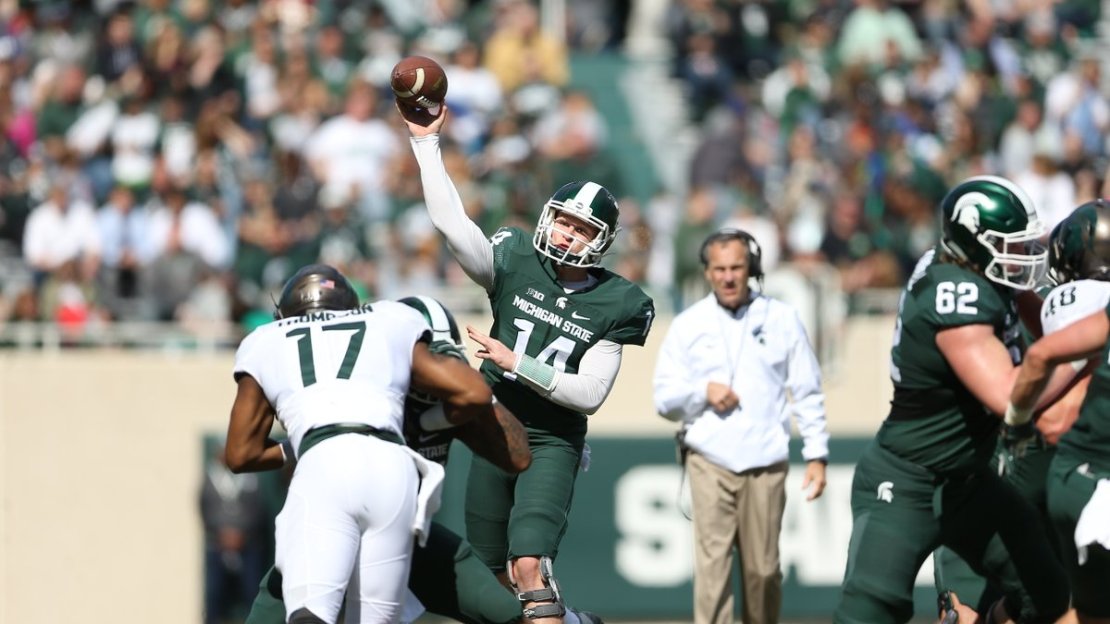 This hasn?t been an ideal spring for Michigan State, as the program had been under wraps with three players as the focal point of a sexual assault investigation. Mark Dantonio hadn?t spoken to the media since Feb. 1 before breaking his silence earlier this week. The entire spring session has been behind closed doors.

Playing this game brought a return to normalcy and offered a relief of sorts to a program looking to get back on track after a disappointing 3-9 season, as MSU missed a bowl for the first time during Dantonio?s 10 seasons in East Lansing.

1. Brian Lewerke looked good at QB. And, that?s good, as the quarterback slot wasn?t a strong suit last season. He was deemed the starter before spring drills, as Lewerke was coming off a broken leg. He made some nice throws and showed command of the offense. Lewerke also showed a connection with a receiving corps that has some good, young talent. The offense had its moments today and looked solid, but the defense probably had the edge overall.

2. The offensive line looks solid. This group wasn?t up to par in 2016. Brian Allen needs to be a key player and leader up front for this unit. Cole Chewins is another player to watch who, like Allen, needs to lead and set the tone. Luke Campbell looked good at tackle. The unit did a nice job on a 75-yard TD run by Madre London in the first half.

3. The safety spot needs to continue to be watched with Demetrious Cox and Montae Nicholson both gone. It?s vital for this spot to solidify, as MSU needs to regain its ?No Fly Zone? swagger that came to define the great Mark Dantonio teams earlier in his tenure. Khari Willis and Grayson Miller are key cogs. Willis has more experience but wasn?t dressed today, while Miller is more highly touted. Demetric Vance and Kenney Lyke are other safeties to watch. Stay tuned. Corner Josiah Scott looks like he may be special.

4. The receiving corps is a work in progress, but there is plenty of talent and potential even with R.J. Shelton gone. Donnie Corley could become a star after flashing as a true freshman last season but wasn?t in uniform today. Trishton Jackson and Felton Davis III also have skills to watch; Davis wasn?t dressed today. Jackson looked good, especially early on. And early enrollee Hunter Rison is an exciting player who is the son of former Spartan star wideout Andre Rison.

5. The pass rush has work to do. This defense ranked last in the Big Ten in sacks in 2016. That must change. Not having Malik McDowell, who turned pro, hurts the situation. Kenny Willekes flashed today. At least it looks like MSU has a good MLB in Joe Bachie for a front seven with a lot to prove.