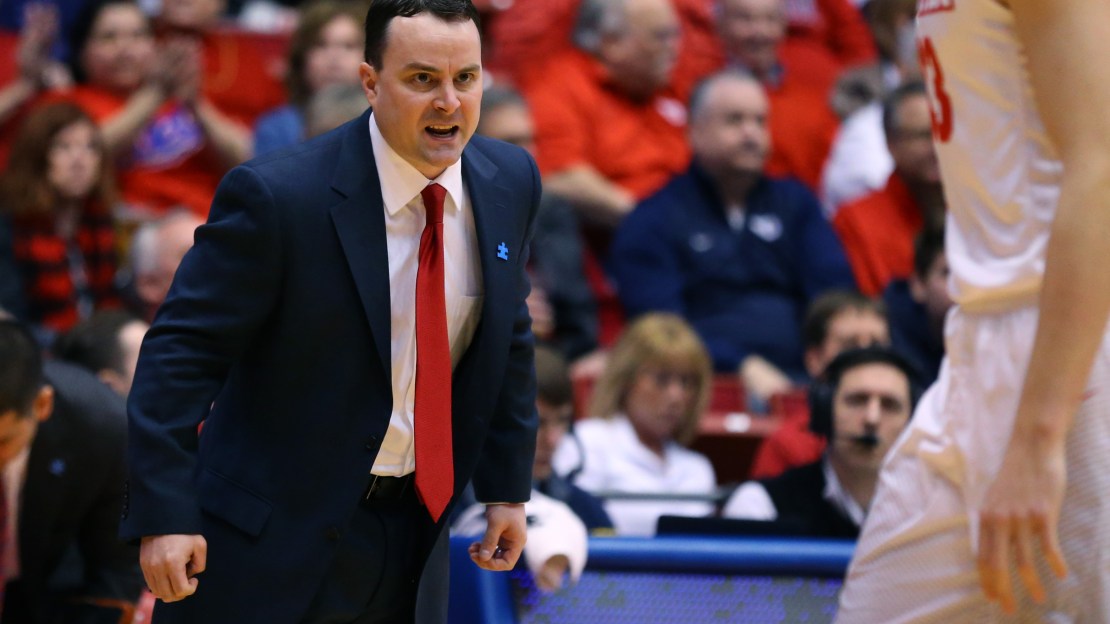 The future of Indiana hoops rests in the hands of Archie Miller, who was formally introduced at a press conference Monday afternoon.

Miller arrives from Dayton, which is only 168 miles from Bloomington, Indiana, but is a million miles away from Indiana when it comes to prestige, pressure and expectations. Remember what Hoosier A.D. Fred Glass said he expected from this program when the search began for a coach:

?The expectations for Indiana University basketball are to perennially contend for and win multiple Big Ten championships, regularly go deep in the NCAA tournament, and win our next national championship-and more after that. We will identify and recruit a coach who will meet these expectations. ?

So, it goes without saying that Miller steps into a crimson and cream cauldron, one of the biggest jobs in all of sports: coaching Indiana basketball. The program drips with history. Witness the five national championship banners that hang in Simon Skjodt Assembly Hall. But the last time one of those banners was hung? It was 1987, when Keith Smart hit that big shot in the final moments to lift Indiana past Syracuse for the championship. That was 30 years ago. And the fan base expects more.

Tom Crean did a lot of good things in Bloomington. He led Indiana to two Big Ten titles and three Sweet 16 appearances. But he never took the storied Hoosier program past the Sweet 16, going 166-135 overall and 71-91 in the Big Ten. So Crean, like Kelvin Sampson before him and Mike Davis before him, was fired.

Indiana fans may have yearned for a more seasoned coach than the 38-year old Miller, who spent the last six years turning Dayton into one of the nation?s better non-Power Five programs and compiling a 139-63 overall record and a 68-34 A-10 mark. He took Dayton to the NCAA tourney each of the last four seasons. Some Hoosier fans wanted UCLA coach Steve Alford. Others had their eyes set on Xavier?s Chris Mack or Oklahoma City?s Billy Donovan of the NBA. Regardless, Miller is the new leader of Indiana.

Here are five things he needs to do.

1. Get a grip on in-state recruiting. This will help greatly to achieve the other goals. For too long, most of the top players from this talent-rich state have matriculated elsewhere. There was a time when that rarely happened. Hoosier-bred prep heroes like Kent Benson, Steve Alford, Jay Edwards, Damon Bailey, Calbert Cheaney and Jared Jeffries–among others–all pledged their allegiance to Indiana. But since Bob Knight left in 2000, a lot of top talent has gone elsewhere, including the likes of Greg Oden, Mike Conley Jr., Deshaun Thomas and JaQuan Lyle to Ohio State, Gary Harris and Zach Randolph to Michigan State, Josh McRoberts to Duke, Glenn Robinson Jr. and Zak Irvin to Michigan, Sean May to North Carolina, Trey Lyles to Kentucky and Kyle Guy to Virginia. Indiana isn?t going to keep all of its in-state studs home, but it needs to start reeling in more of them, like James Blackmon Jr.

4. Get to the Final Four. Indiana hasn?t been to college basketball?s holy land since Mike Davis took the Hoosiers there in 2002, losing the title game to Maryland. Since then, programs like Georgia Tech, Texas, Marquette, Oklahoma State, Illinois, Florida, LSU, George Mason, Memphis, Butler, West Virginia, VCU, Wichita State, Wisconsin, Oklahoma, Gonzaga and South Carolina have reached the Final Four. No disrespect to those schools, but they lack the heft of Indiana, which is considered a college basketball elite along with the likes of Duke, North Carolina, Kentucky and UCLA.

5. Win the national championship. This is what giants of the sport with the heritage, resources and talent base that Indiana possesses do. But 30 seasons have passed since that magical win over Syracuse in the Superdome that was fueled by Steve Alford, Dean Garrett and Keith Smart. At the time of that title, it was the Hoosiers' third championship since in 12 years (1987, 1981 and 1976). Elite schools like North Carolina, Duke and Kentucky have claimed their share of titles since 1987. Duke has won five since 1991; North Carolina has three since 1993 and the Wildcats have three since 1998. UConn also has done well, taking home four national championships since 1999.