Tourney recap: No. 4 Florida sinks No. 8 Wisconsin in OT thriller 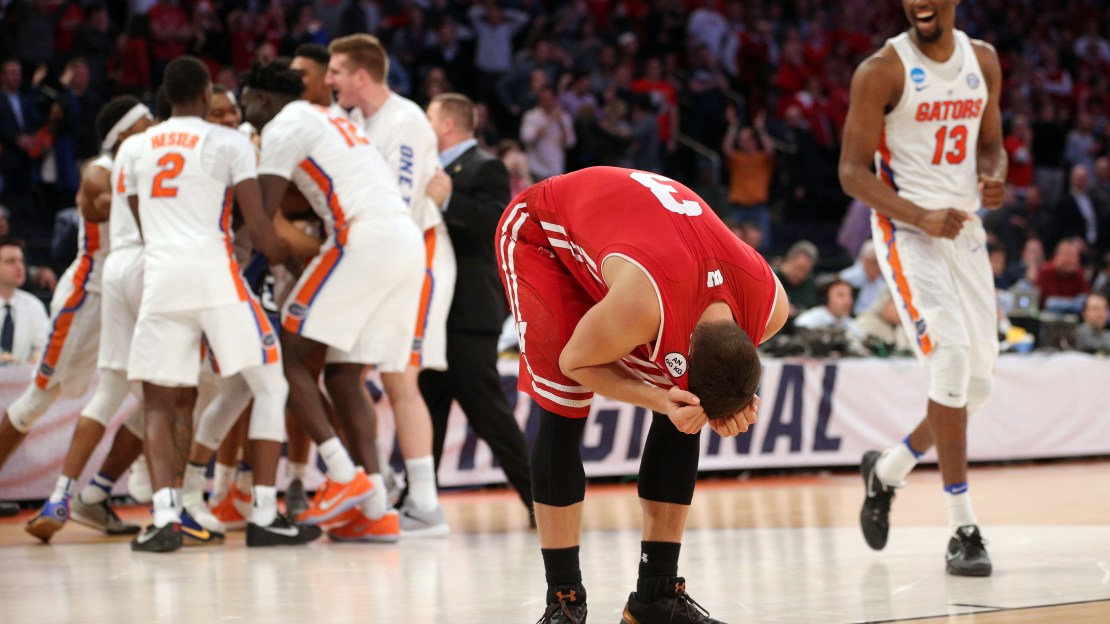 Has your heart stopped racing yet?

In what arguably has been the best game of the NCAA tourney so far, Wisconsin suffered a crushing 84-83 OT loss to Florida in this Sweet 16 clash after the Gators sunk a game-winning 3-pointer at the buzzer.

You can analyze UW's defense on Florida's game-winning shot by Gator point guard Chris Chiozza all night, but give UF credit for hitting a difficult attempt. Amazingly, that was the second 3-pointer in the dying seconds, as Wisconsin?s Zak Showalter nailed one to force OT. I still don't know how he hit it.

This was a tough way for the Badgers? season to end, as UF will go on to play No. 7 South Carolina in an All-SEC Elite Eight matchup in New York City on Sunday. With No. 8 Wisconsin getting beat by No. 4 Florida, the Big Ten is officially out of the NCAA tourney.

All three teams that advanced to the Sweet 16–No. 4 Purdue, No. 7 Michigan and now No. 8 Wisconsin–are gone. Some critics may howl again about how this was a down year for the Big Ten. Perhaps. Still, getting three teams into the Sweet 16 is a nice feat. And the Badgers were the most impressive of all the Big Ten squads in the NCAA tourney.

It was a nice run for Wisconsin, who finished second in the Big Ten in the regular season and advanced to the league tourney title game. In the Big Dance, the Badgers knocked off No. 9 Virginia Tech and then stunned No. 1 overall tourney seed and defending national champion Villanova in the second round. But Wisconsin couldn?t get by the Gators on this night.

Top star: Let?s hear it for Florida?s KeVaughn Allen. The kid was unreal. The sophomore was on fire, hitting 11-of-24 shots for 35 points. He was the lone Gator in double-figures after having just 11 combined points in the first two NCAA games. And we have to mention Wisconsin?s Nigel Hayes, who led the Badgers with 22 points and had six rebounds. He also hit two big free throws that looked to win the game for UW in OT before the Gators? game-winning 3-pointer.

Top stat: 20-3, which was Florida?s bench scoring vs. Wisconsin?s. The Gator depth paid dividends. And it didn?t help the Badger that star Bronson Koenig got hurt late.

It was over when: This was a fun, competitive, back-and-forth game that Florida led at the half, 34-32. The Gators took control early in the second half, but the Badgers battled back to take a 53-52 lead on a Nigel Hayes free throw with 10:21 left in the game. Then, the Gators built a 12-point lead with 5:24 remaining. But Wisconsin kept fighting and cut Florida?s lead to 72-69 on an Ethan Happ layup with 44 ticks hanging on the clock. UW forced a Gator turnover after the Happ made field goal and had a chance to tie the game with a 3-pointer. And Zak Showalter delivered, hitting a crazy three with 2.1 seconds left, as UW scored the last eight points to force OT. Showalter celebrated his big make by doing a "discount double check belt salute" to Packers QB Aaron Rodgers, who was in attendance.

We have our first overtime of #MarchMadness! pic.twitter.com/a3Jos8g2HM

In the extra session, the Badgers led by as many as five points. But Florida rallied to tie the game, 81-81, with 24 seconds left. With the four seconds hanging on the clock, Nigel Hayes drove to the hoop and drew a foul. He was 5-of-12 from the free-throw line up to that point ? and Hayes promptly sunk both freebies. Game over, right? Wrong. The Gators had four seconds left, and they made them count, as Chris Chiozza hit a winning 3-pointer at the buzzer.

What?s next? Wisconsin will have some big holes to fill with seniors Bronson Koenig, Nigel Hayes, Vitto Brown and Zak Showalter gone. That?s a lot of star power that has won a lot of big games in recent years and been a part of two Final Four clubs. But Greg Gard will have some good parts to work with, including D?Mitrik Trice, Brevin Pritzl, Jordan Hill and Khalil Iverson in the backcourt. Up front, Ethan Happ will be back as one of the nation's top players. And Wisconsin will welcome four-star recruits in guard Brad Davison and forward Nathan Reuvers. This team will be a factor in the Big Ten once again.