Tourney recap: No. 1 Kansas unleashes second half avalanche on No. 4 Purdue 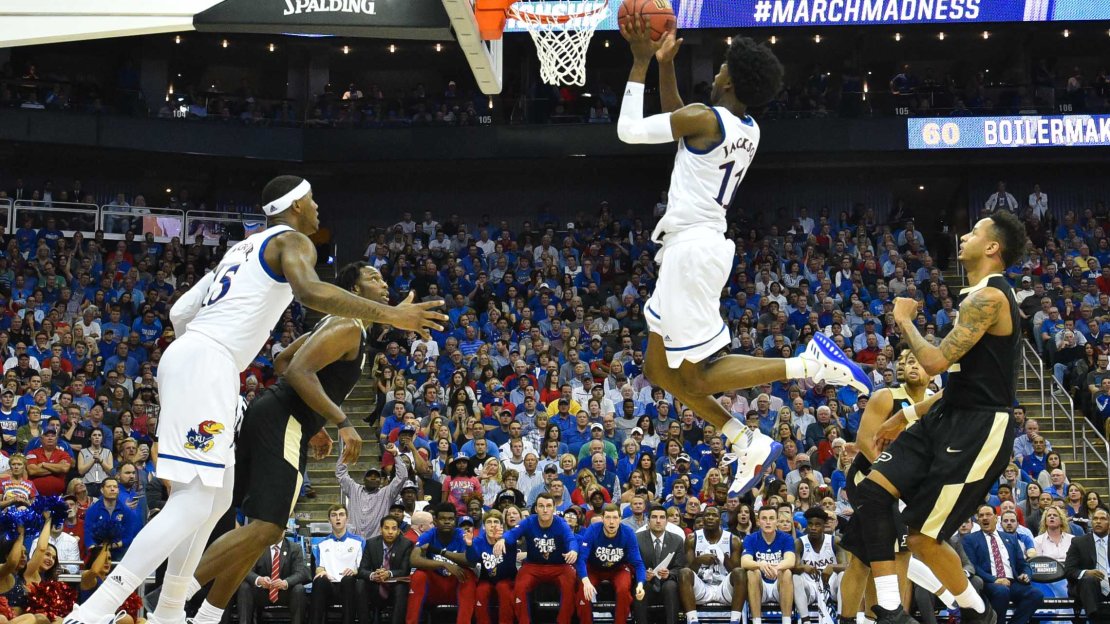 There's no shame in losing to this Kansas team, which is a No. 1 seed.

And it showed why on this night, as KU took a 98-66 decision. The Jayhawks are so explosive, able to score points in bunches.

Purdue led most of the first half, as it shot 55 percent from the field and 46 percent from 3-point land. But the Jayhawks kept coming at the Boilers in waves, killing Purdue on the glass, getting to the rim with ease and matching the Boilermakers? marksmanship. The Jayhawks were too quick, too athletic and just plain too good for Purdue. The No. 4 Boilermakers needed to play the perfect game to have any shot to win. And, Purdue didn?t come close.

Matt Painter?s squad had 16 turnovers and was outscored 51-26 in the second half. And the Boiler stars didn?t play like stars, as Caleb Swanigan had 18 points and seven rebounds with six turnovers and Vince Edwards had eight points and four boards. So, Purdue still will not have made the Elite Eight since 2000. But, this was a fun and successful season in West Lafayette for a program that won the Big Ten regular season championship. While Purdue heads home, Kansas will move on to play No. 3 Oregon in the Elite Eight on Saturday with a shot to go to the Final Four for the first time since winning it all in 2012.

Top star: We saw why KU guard Frank Mason is a national player of the year contender, notching 26 points on 9-of-11 shooting with seven rebounds and seven assists. Fellow guard Devonte Graham also had 26 points. Purdue?s guards were no match for Kansas? backcourt.

Top stat: 16, as in turnovers for Purdue. Swanigan had a team-high six. KU scored 20 points off those turnovers.

It was over when: Purdue actually led by eight points in the first half, as it hit 6-of-13 3-pointers. But KU had a burst at the end of the first half to take a 47-40 edge. You could feel the scales tipping toward the Jayhawks. And, they were. Kansas never looked back after intermission, pulling away from Purdue. The Jayhawks went on a 14-2 run to take a 72-56 lead with 10 minutes to go, as the turnovers kept piling up for Purdue. The rest of the half was essentially an exhibition for KU, delighting its fans that packed the Sprint Center with fancy passes, big dunks and pretty shots. How ugly was the second half for Purdue? It was outscored, 51-26.

What?s next? Did we just see the sophomore Swanigan play his final game for Purdue? Perhaps. He tested the NBA waters after his freshman season. There also is a chance Edwards could leave, too, as he tested his NBA stock last year, too. But he seems like a better bet to remain. Even if Swanigan leaves, the Boilermakers will have a nice core to build around. In addition to Vince Edwards, Purdue will welcome back Carsen Edwards, Isaac Haas, Ryan Cline, Dakota Mathias and P.J. Thompson. Add it all up, and the Boilers should have the makings of an NCAA team once again in 2017-18.

B1G Player of the Year for @BoilerBall. ??

Thanks for the ride this season, Biggie. ? https://t.co/s2CFRF7IZI