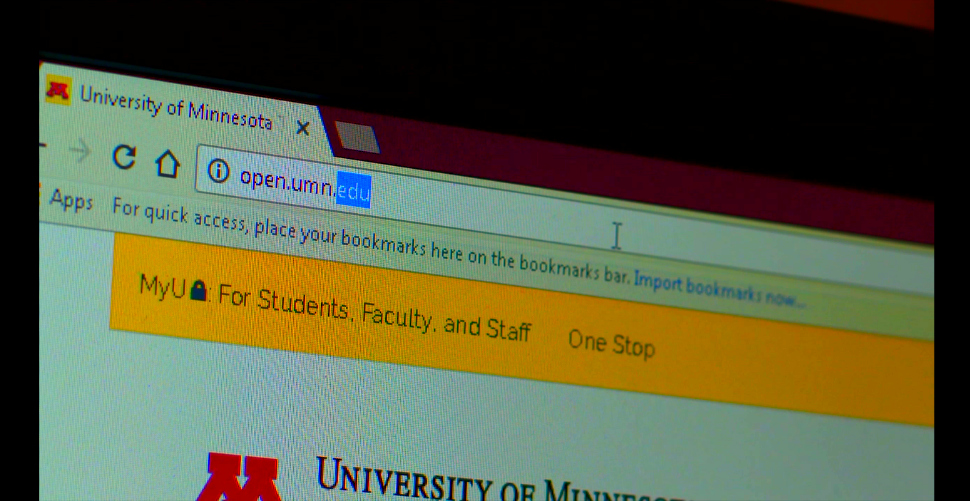 A student enrolled in a typical university in the U.S. can expect to spend roughly $1,300 a year on textbooks. Add tuition, room and board, and it?s not difficult to see why students - and their parents - can sometimes look for creative ways of making ends when it comes to higher education.

As the University of Minnesota?s David Ernst explains, textbooks are often seen as an expendable line item on the ultimate cost of college, which can often lead students with precious few choices.

?Because of the high cost of textbooks, students are forced to try to get by without them when they can?t afford them,? says Ernst. ?This means that they?ll try to share textbooks, [and] they may be breaking the law by downloading the textbook on the internet.?

To combat what they saw as one of the chief impediments to a student?s academic success, Ernst - who serves as the Chief Information Officer for the UMN College of Education and Human Development - and his colleagues created an online resource for professors and students looking for an alternative to traditional textbooks.

The Open Textbook Network is a cooperative alliance of over 250 institutions and universities committed to making education accessible through textbooks that are funded, published and licensed to be free and flexible in terms of usage.

According to Ernst, the network is relatively easy to use, helping ease educators? transition from traditional textbooks.

?All faculty need to do is go to the Open Textbook Library and find textbooks that work for them,? says Ernst. ?What we?re finding our faculty saying is these are quality textbooks that benefit both their students and their courses.?

Students can access their textbooks online, which is a major convenience over having to lug weighty tomes across campus. Online features allow students to use the books much like hard copies, highlighting important passages and even making searchable notes on the text.

The Open Textbook Network has been accessed by students and professors in nearly every nation on Earth. It is estimated to have saved the students using it $3.1 million since its inception. Those are both wins for Ernst and his team, who hope to see the network, one day, be the preference of college professors.

?We?d love to see Open Textbooks being the default,? he says. ?We hope that more and more students can have free high quality textbooks that don?t get in the way financially of their success.?

For Ernst, helping students succeed is more than just an admirable goal; it?s something he sees as a core value and commitment of his university. ?This is the mission of the University of Minnesota, to help students succeed and to help them grow. And if the cost of textbooks gets in the way, then we really should do something about that.?