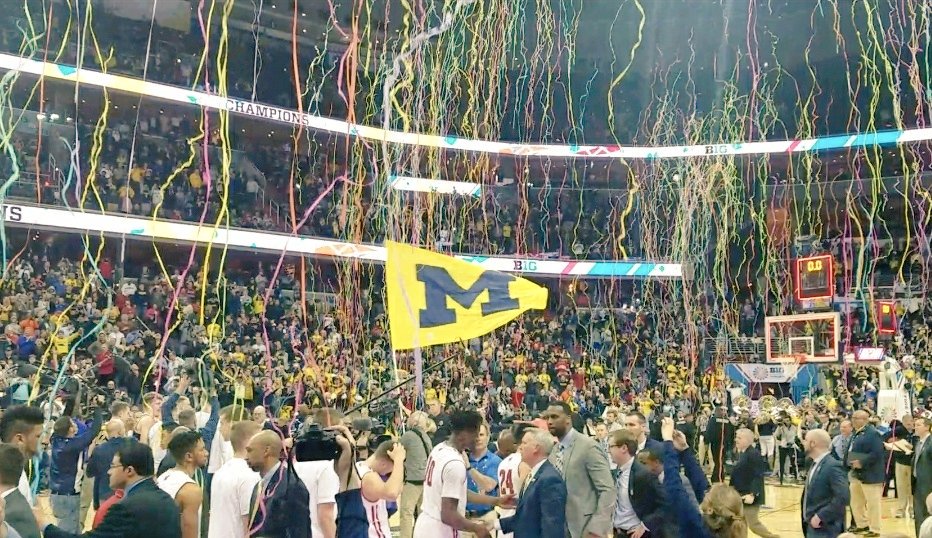 WASHINGTON — Michigan?s run to the title game is the stuff of which movies are made. In fact, some feel it?s one of the greatest stories in Big Ten history. I?m not going to argue that. The team had to endure the horror of an aborted takeoff on Wednesday that resulted in their plane careening off the runway.

John Beilein gave the team the option of forgoing this trip to the Big Ten tourney. But the players voted to come. And, the team seemingly has been galvanized in Washington, D.C., making an improbable four wins in four days march to the championship as at No. 8 seed, knocking off No. 9 Illinois, No. 1 Purdue and No. 4 Minnesota before taking down No. 2 Wisconsin, 71-56, in the championship game Sunday afternoon.

This game was a joy to watch, textbook basketball that featured unselfish play, beautiful passing, defense without fouling and teamwork. This Michigan team is as hot any in the nation and could be primed for an extended run in the Big Dance. But even before the Wolverines arrived in the Verizon Center on the day of their opening game after their plane mishape, they already were a hot team that had won six of its last eight games. The two losses? In overtime at Minnesota and at Northwestern on a miraculous shot.

Wisconsin is a seasoned bunch that has nothing to be ashamed of. Wisconsin has played a lot of big games in March and played well in D.C. Seniors Bronson Koenig and Nigel Hayes have been to the summit, and sophomore Ethan Happ is a one of the nation?s best players. That trio has this team playing well with the Big Dance about to begin. This is a veteran squad that has played in a lot of big games. It could make a run in March.

Get the best from Michigan's tourney title victory below.

Top star: Derrick Walton Jr., Michigan. The senior once again was a big-time star, capping a tourney MVP effort on this day with 22 points on 6-of-15 shooting with six rebounds, seven assists and two steals. And he had just one turnover. And think: He wasn?t even first-team All-Big Ten.

Top dunk: With Wisconsin pressing to get back in the game late, Wolverine big man D.J. Wilson got loose down court. Derrick Walton hit him with a long pass, and Wilson made a thunderous two-handed jam for a 63-52 lead with 1:34 left.

It was over when: After Michigan had built an 11-point lead with 8:26 to go after a Muhammad-Ali Abdur-Rahkman 3-pointer, Wisconsin stormed back to trim the deficit to six with 6:06 to go. Time for the Wolverines to panic? Nope. With the shot clock winding down, Michigan?s Zak Irvin turned and chucked up what looked like an ill-advised shot from 3-point range ? and he sunk it. That gave the Wolverines a 54-45 lead with 5:49 remaining. They never looked back from there.