Best of the 2017 Big Ten Tournament 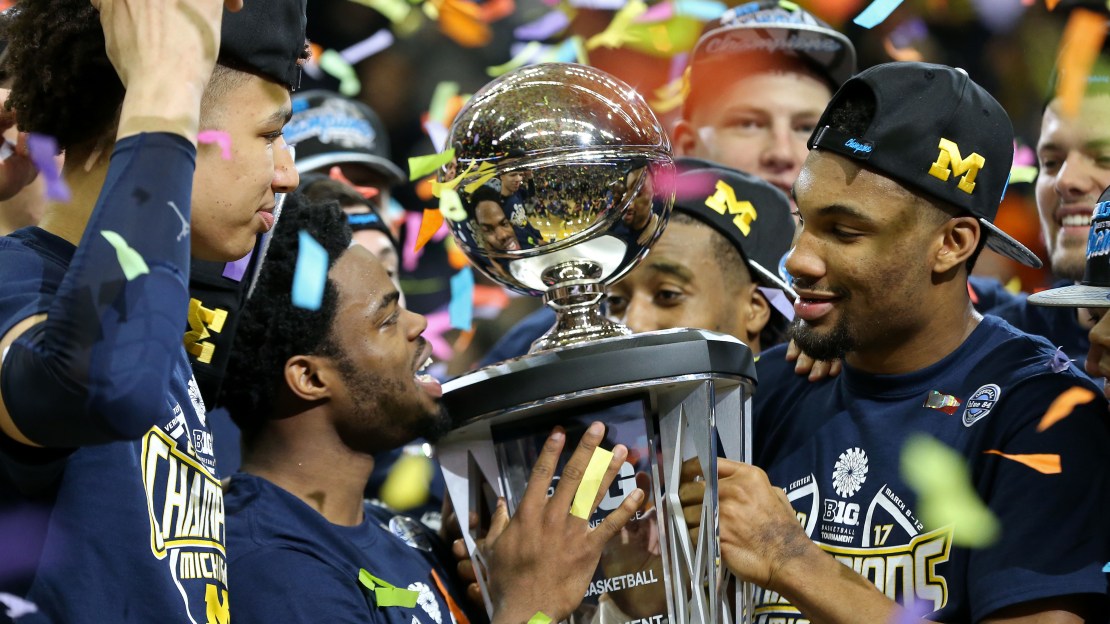 WASHINGTON — Now that a Big Ten Tournament champion Michigan has been crowned after blazing an incredible four-day trail through D.C., it?s time to pick the ?bests? from the event celebrating its 20th season. It?s tough to narrow down these picks after 13 games in five days, but here they are. Tweet me (@arouxBTN) if you disagree.

Best performance: Derrick Walton Jr. vs. Minnesota. The senior has had a phenomenal season, and the eventual turned in one of the finest performances of his career in the semifinals. Minnesota was threatening to erase Michigan?s blistering start Saturday, but Walton put the Wolverines on his back with 29 points, nine assists, five rebounds and two steals. He only had one turnover, to boot. This sick crossover into a 3-pointer helped keep the Gophers at arm?s length down the stretch.

Best story: Michigan. If you don't know the story by now, well, you have some reading to do. Long story short: Michigan survived a plane accident as it was taking off Wednesday, didn't get into D.C. until hours before its opener Thursday, and still managed to become just the second team in Big Ten tourney history to rip off four consecutive wins en route to claiming the hardware.

Best dunk: Miles Bridges 360 vs. Minnesota. The Spartans? freshman phenom threw down a few worthy candidates (watch all of them) for this title, but whenever you see a 360 slam in the college game, it?s almost always going to vault to the top. The last spinning slam in the Big Ten Tournament was Victor Oladipo?s 360 in 2013, so these don?t come around all that often. Minnesota was on the wrong end of the Bridges jam, but the Gophers came away with the victory.

Best pass: Melo Trimble no-look to LG Gill vs. Northwestern. Melo?s wizardry in the home of the Wizards was short-lived with Maryland?s Friday defeat, but he still got a chance to dish some sizzle with this sweet no-look dime.

Best shot: P.J. Thompson?s half-courter vs. Michigan. Purdue was bounced in its first game against eventual champ Michigan, but its point guard cashed the longest shot of the tournament before the halftime buzzer. This was his second half-court halftime buzzer-beater of the season, also doing so vs. reigning national champ Villanova.

Best uniform: Michigan. Purdue's "Big Dog" throwbacks were a nice touch, but considering the story and the way uniform stood out like a sore thumb, it has to be Michigan's practice jerseys Thursday vs. Illinois. The Wolverines were forced to go with the practice threads because their uniforms remained on the plane in Michigan, as part of the official investigation. Michigan got its usual uniform back in time for Friday's upset win vs. No. 1 Purdue.

? from an awesome game and WIN… in the these awesome unis. #GoBlue #B1GTourney pic.twitter.com/Md5xKh9xSV

Best laugh: Wisconsin huddle spill vs. Northwestern. Nigel Hayes, Bronson Koenig and Zak Showalter are the remaining members of those Badger Final Four teams that were always down to clown, so we shouldn?t be surprised some shenanigans took place in the Wisconsin huddle during their easy semifinal victory.

Got to love this @BadgerMBB team. https://t.co/DcvXTuAMJu

Best troll: Julia Louis-Dreyfus and Scott Van Pelt. A savvy video board operator can make events like these much more enjoyable, and one of the most amusing moments from the weekend came Friday night. The Verizon Center was packed with rowdy Maryland fans, and they were eager to boo when Northwestern celebrity fan Julia Louis-Dreyfus was shown on the video board. The operator then switched to a shot of Maryland?s own celebrity fan, Scott Van Pelt. SVP took a bow, and the crowd went crazy.

Best fan: Flavor Flav. A handful of famous fans made appearances throughout the tournament, but Flavor Flav stole the show during Wednesday?s action. His cousin is Penn State?s Shep Garner, and Mr. Flav was living and dying with every play throughout the Nittany Lions? win over Nebraska. He was also a man of the people, taking hundreds of pictures with approaching fans. And of course, he was rocking his signature clock chain.

Best mop-up moment: This is easy. The split screen ESPN did when Charlie Hall, Brad Hall and Julia Louis-Dreyfus's son, entered the game in the final minute of Northwestern's rout vs. Rutgers on Thursday was perfection. The Emmy winner provided some excellent reaction and looked just like a normal parent.

Best sign: Big Ten fans broke out some creative signs at the BTT, but sometimes simple is better. Besides, JLD got the last laugh. We?re not sure if this guy ever got a reply.

We've seen some strong signs these last five days in D.C., but this one might be the best.@OfficialJLD got the last laugh, though. pic.twitter.com/l3uHOjWqIl

Best delivery: This technically didn?t happen during the Big Ten Tournament, but this interview from Indiana?s strength coach Lyonel Anderson about how he delivered his wife?s newborn baby is priceless.

Best quote: It?s incredible that Michigan was able to win four games in four days after the incident with their airplane in Ann Arbor, and Wolverine athletic director Warde Manuel did a great job of putting the sport in perspective while discussing the team?s experience.