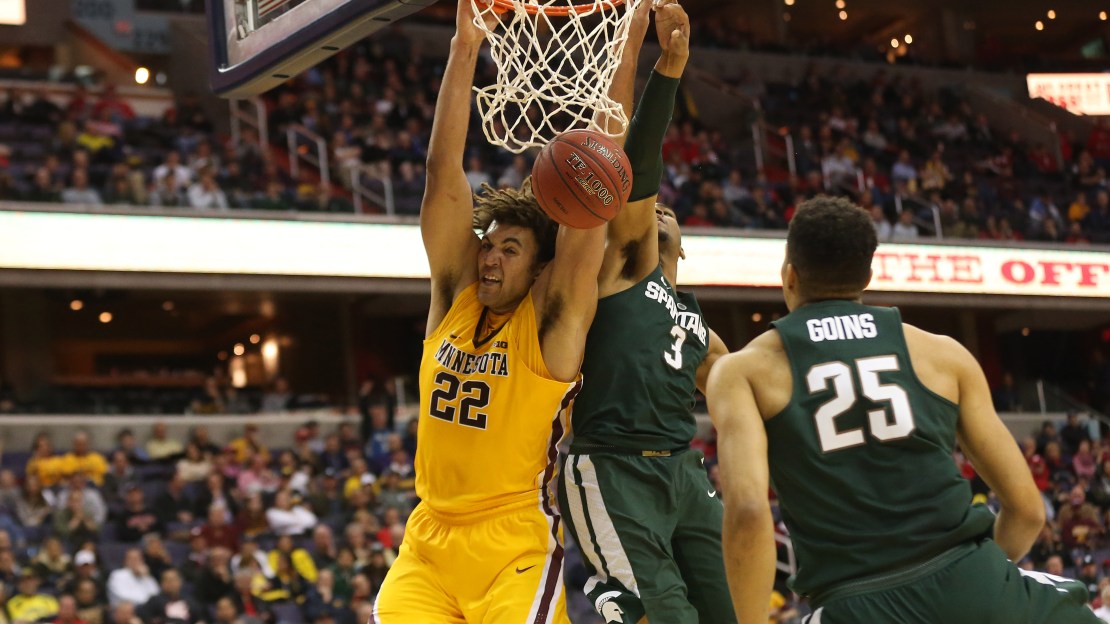 WASHINGTON — No. 4 Minnesota arrived to the Big Ten tourney as one of the hottest teams in the league, winners of eight in a row before losing the season finale at Wisconsin. And they continued to be on a roll, taking a 63-58 triumph vs. No. 5 Michigan State to advance to the final four of the Big Ten tourney.

The rise of the Golden Gophers has been remarkable, from 8-23 last year to 24-8 this season. The arrival of freshman Amir Coffey has been big, as have been the additions of UW Milwaukee transfer Akeem Springs and Illinois State transfer Reggie Lynch. And Jordan Murphy has matured into an underrated star.

Michigan State has endured a trying season, as the program dealt with an ambitious schedule, injury and youth. Will this team ever get it all together? Time is running out.

Minnesota will take on No. 8 Michigan on Saturday for a chance to play for the Big Ten title. There is a reason why Richard Pitino was the Big Ten Coach of the Year. Take a bow … again.

Top star: Reggie Lynch, Minnesota. Lynch is the Big Ten Defensive Player of the Year, a rim protector extraordinaire. He had five blocks today to go with a team-high 16 points and four boards.

Top stat line: Jordan Murphy, Minnesota. Much is made of Caleb Swanigan and his double-double prowess, but how about Murphy? The guy is an underrated beast, and he delivered another double-double (10 points and 13 rebounds) in just 21 minutes.

Top dunk: Michigan State?s Miles Bridges continues to show why he is the top freshman in the Big Ten. And, he did it again vs. Minnesota, flying through the air for a quartet of highlight dunks. I'd love to pick one, but I'm honestly not sure if any of them is better than the others. What a stud. Watch all of Bridges' dunks.

It was over when: After Michigan State's Matt McQuaid hit a 3-pointer to give the Spartans a 52-50 lead with 5:39 left, Minnesota responded by outscoring the Spartans, 13-6, the rest of the way.