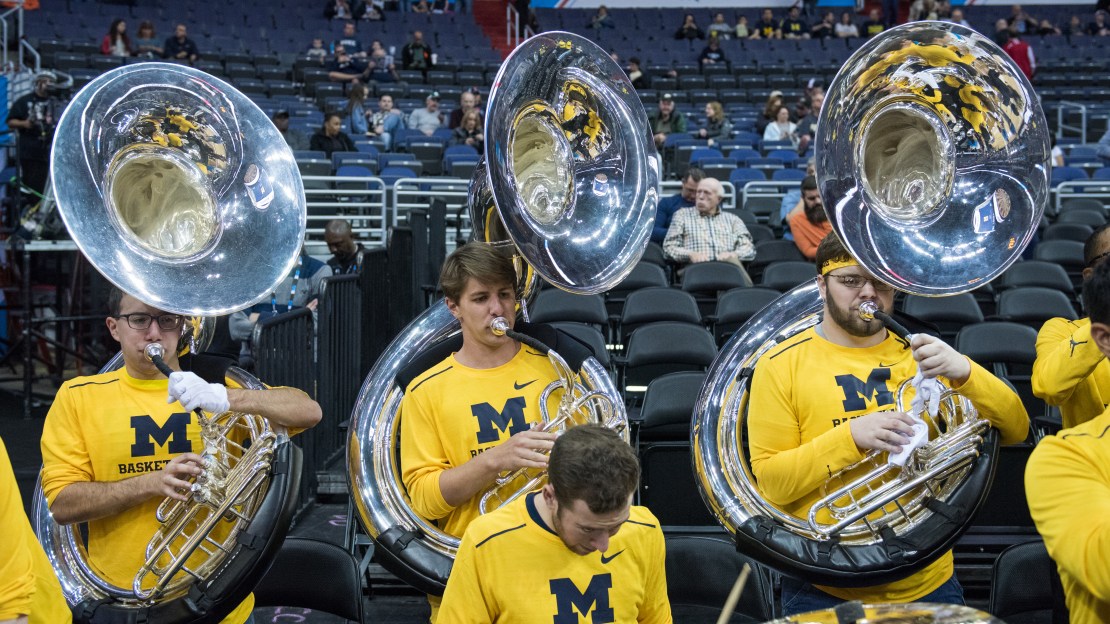 WASHINGTON — Michigan basketball?s wardrobe change was obvious to anyone watching Thursday, as the Wolverines donned practice jerseys in their 75-55 win over Illinois at the Big Ten Tournament.

Their regular uniforms remain on board the team plane that skidded off the runway Wednesday, as part of an investigation into the accident. But they weren?t the only pieces of essential equipment left behind.

The Michigan marching band was on board, as well, meaning its clothes and instruments are part of the investigation. Unlike the out-of-place practice unis worn by the hoopers, it was impossible to tell from afar that the band members had been involved in any kind of incident. They were in Washington, D.C. with the team Thursday, playing "The Victors" as loud as ever.

So how were basketball uniforms unable to make while Michigan's band brought a full set of instruments–tubas and all–to D.C??

?We were very fortunate that we have a nice inventory of instruments,? associate band director Andrea Brown said. ?So when we went back to Ann Arbor last night, we gathered new instruments and loaded them on the bus this morning.?

With the way the Wolverines played Thursday, it looks like the Michigan contingent could be in for an extended stay in the nation?s capital. Brown was hopeful that their original luggage in Ann Arbor might be shipped to them eventually, but the band planned ahead just in case. Should the Wolverines play on until Sunday, they brought enough spare luggage to last the weekend.

And despite being just about 24 hours removed from an unnerving experience, Brown and the band were taking everything in stride.

?It?s been very exciting; some of it frightening in that kind of way,? Brown said. ?But everybody was just so calm and supportive of each other and we were able to kind of laugh and joke about it yesterday.?

Just like the Wolverines basketball team, the band didn?t miss a beat Thursday when it was time to perform.