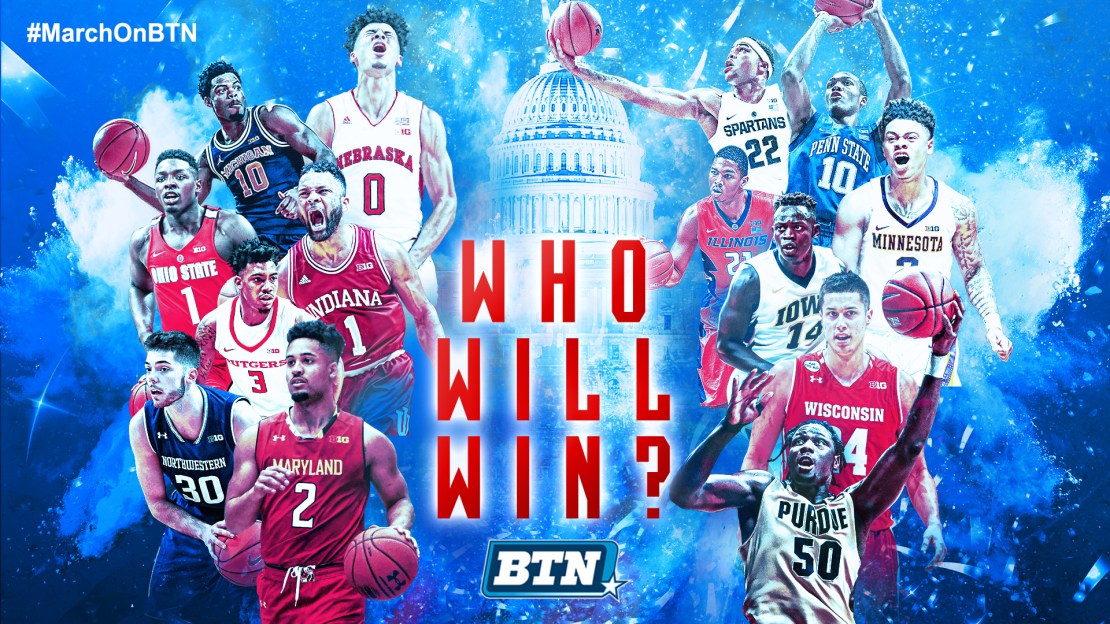 BTN will provide a full week of comprehensive coverage of the Big Ten Tournament from Washington D.C., including five games, pre- and post-game analysis, coach and player interviews, and a 90-minute B1G Basketball & Beyond: Selection Sunday Special.

At 5 p.m. ET Tuesday, BTN Live: B1G Tournament Preview will broadcast from the Verizon Center in Washington D.C., home of the men's basketball tournament. Host Dave Revsine will be joined by analysts Jon Crispin, Stephen Bardo and Morris to discuss tournament expectations and keys to each team's success.

BTN's tournament coverage continues at 6:30 p.m. ET on Wednesday with the B1G Tip-Off Show presented by Auto-Owners Insurance, followed by No. 11 Ohio State vs. No. 14 Rutgers at 7 p.m. ET. Kevin Kugler and Morris will have the call with Mike Hall reporting courtside. Thursday's action begins at 11:30 a.m. ET with the B1G Tip-Off Show, followed by No. 8 Michigan vs. No. 9 Illinois at noon ET, with No. 5 Michigan State taking on the winner of No. 12 Nebraska vs. No. 13 Penn State at approximately 2:30 p.m. ET. Kugler and Crispin will have the call for Thursday's games, with Rick Pizzo reporting courtside. Following Thursday's early games on BTN, a special two-hour BTN Live will broadcast live from Penn Social at 4:30 p.m. ET, just three blocks from the Verizon Center.

On Friday, the B1G Tip-Off Show begins at 6 p.m. ET, followed by a pair of quarterfinal games featuring the No. 2 Wisconsin and No. 3 Maryland. Friday's crew will feature Brian Anderson and Bill Raftery on the call and Hall reporting courtside.

At 7 p.m. ET Sunday, after a Big Ten Tournament champion is crowned and NCAA Tournament bids are announced, Revsine and Crispin will discuss the bracket and the road to the Final Four for each of the Big Ten squads from Chicago. Pizzo, Morris and Mike DeCourcy will weigh in from D.C. on B1G Basketball & Beyond: Selection Sunday Special presented by Motorists Insurance Group.

BTN's award-winning original series, The Journey, will also be at the Verizon Center to capture behind-the-scenes footage throughout the tournament. The one-hour season finale of The Journey: Big Ten Basketball 2017 will debut at 8 p.m. ET on Wednesday, March 15.

BTN's digital content during the men's basketball tournament, including highlights, Facebook Live broadcasts and behind-the-scenes live Periscope streams will be presented by Libman. For the second consecutive year, the BTN Instagram account will feature the photography of both Fred Daniels and Alexander Jonesi. As part of BTN's Artist Instagram Takeover, the pairing will share their unique perspective on the action, including pre-game, in-game and post-game imagery during the Big Ten Basketball Tournament.

The daily schedule is listed below (all times Eastern). Please note, game times and the times of the B1G Show are all approximate. All programming is also available to be streamed on BTN2Go.