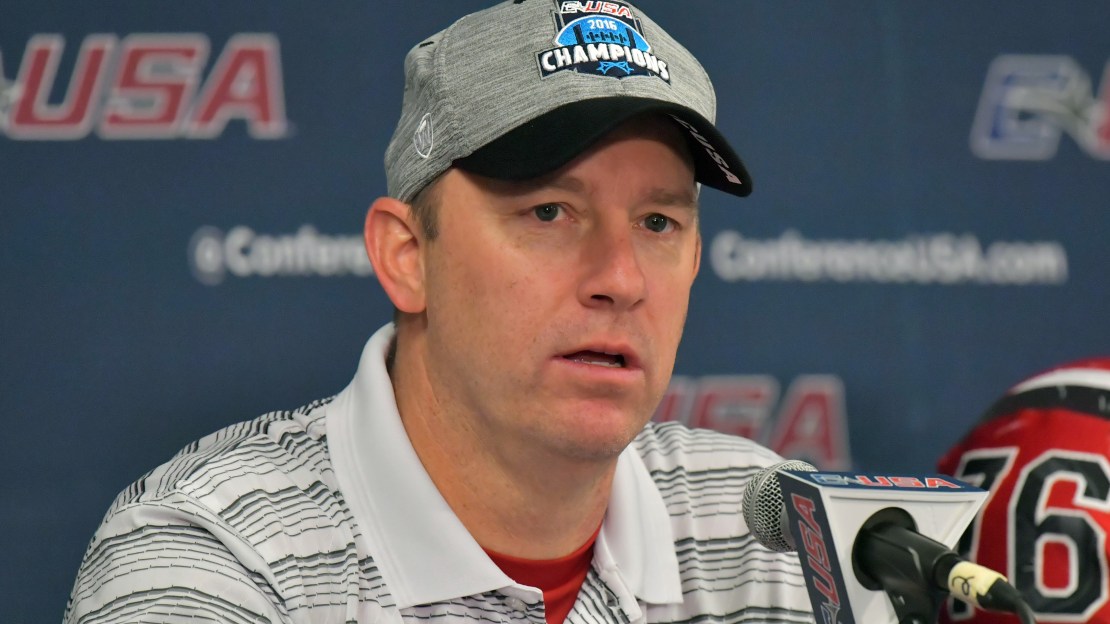 A new era is dawning in West Lafayette, Indiana, as Jeff Brohm takes over a woebegone program that won a scant nine games over the last four years. Getting blown out was a common occurrence for a Purdue program that has to hope it has hit rock bottom.

Now, the only way to go is up, right? That?s the hope. And hope is one thing that Brohm brings to the program after building an offensive juggernaut at Western Kentucky. He has built a nice staff that will get its first look at the roster.

Brohm has some parts to work with, including junior QB David Blough, junior RB Markell Jones, senior corner Da?Wan Hunte and some nice linebackers in sophomore Markus Bailey and senior Ja?Whaun Bentley and tight ends in junior Cole Herdman and sophomore Brycen Hopkins. After that?

1. Offensive line. This unit is in poor shape. DEFCON ONE. Truth be told, it has been for years. JC Ethan Smart already is on campus along with freshman Jalen Jackson. Junior Kirk Barron is back at center to provide some stability. As is sophomore left tackle Matt McCann, but he will miss the spring with injury. Sophomore tackle Mike Mendez could make a move, along with senior tackle Jalen Neal. Each has started. Keep an eye on redshirt freshman Grant Hermanns, junior Eric Swingler, sophomore guard Peyton Truitt and junior guard Bearooz Yacoobi. Brohm is in the market for a grad transfer. Stay tuned.

2. Receivers. The good news is Purdue has tight ends in Cole Herdman and Brycen Hopkins who could be nice weapons. But the situation at wideout is dire. The Boilermakers lose four key wideouts (DeAngelo Yancey, Domonique Young, Cameron Posey and Bilal Marshall) that must be replaced. The foursome combined to make 157 catches for 2,122 yards and 17 TDs in 2016. There is little veteran talent the staff can count on. Senior Anthony Mahoungou, sophomore Terrance Landers and senior Greg Phillips will try to impress. Freshmen D.J. Edwards and Tyler Hamilton are early enrollees with potential. It?s hoped JC transfers Isaac Zico and Terry Wright will make a big impact, but they won?t arrive until the summer.

3. Defensive line. Like its offensive counterpart, the defensive front needs help-now. The staff can count on senior ends Gelen Robinson and Austin Larkin. JC end Kai Higgins already is on campus. Junior tackle Eddy Wilson is an anchor inside who left the program for a bit after 2016 but is back. Thank goodness. Depth across the board is razor thin. Maybe guys like Lorenzo Neal (out this spring) and Alex Criddle can help inside. Criddle may be a breakout guy. Stay tuned. Everyone has their fingers crossed in West Lafayette. If the Boilers can?t stop the run, this defense will have little chance to succeed.