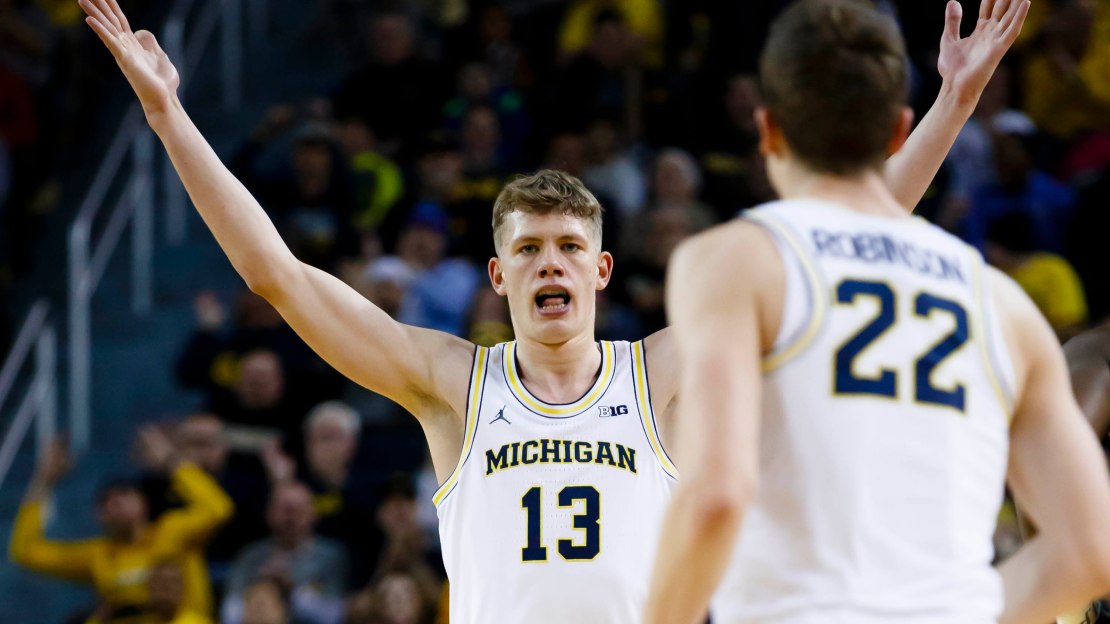 (AP) Moe Wagner scored 22 of his 24 points in the first half, outplaying everyone on Purdue's vaunted front line and leading Michigan to an 82-70 victory over the 14th-ranked Boilermakers on Saturday.

Derrick Walton added 17 points and 11 rebounds in his final scheduled home game, and the Wolverines (19-10, 9-7 Big Ten) took another big step toward an NCAA Tournament berth. Michigan has won five of six, including victories over Michigan State, Wisconsin and Purdue.

The Boilermakers (23-6, 12-4) had their six-game winning streak snapped and could fall into a tie for first in the Big Ten with Wisconsin if the Badgers win at Michigan State on Sunday.

Caleb Swanigan scored 18 points for Purdue, but the Boilermakers couldn't take full advantage of their edge in size. The 6-foot-9 Swanigan and 7-foot-2 Isaac Haas combined to outscore Wagner by only two points.

Michigan made seven consecutive shots to take a 33-20 lead on a 3-pointer by Walton. Wagner added a 3 moments later, giving him the same number of points (20) as Purdue's whole team.

Duncan Robinson's fadeaway 3-pointer from the right corner gave the Wolverines a 45-30 lead at halftime, and although some foul problems limited Wagner in the second half, Michigan got enough contributions to maintain a comfortable lead.

The Boilermakers trailed 73-67 after an 8-0 run late in the second half, but with the shot clock running down, Walton leaned inside of Purdue's P.J. Thompson to sink a 3-pointer that pushed the lead back to nine with 1:43 to play.

Purdue: The Boilermakers did a better job establishing their inside game in the second half, but the deficit was simply too big. Purdue's height was in many ways negated by the 6-11 Wagner's ability to play on the perimeter.

Michigan: The Wolverines are now assured of at least a .500 record in the Big Ten regular season, and Wagner's emergence means they can beat good teams even when someone such as Zak Irvin has an off day. Irvin scored only four points Saturday but didn't force the issue.

Michigan: The Wolverines finish the regular season with two road games, the first of which comes Wednesday night at Northwestern.