Iowa sends No. 24 Maryland to third straight loss with 83-69 upset 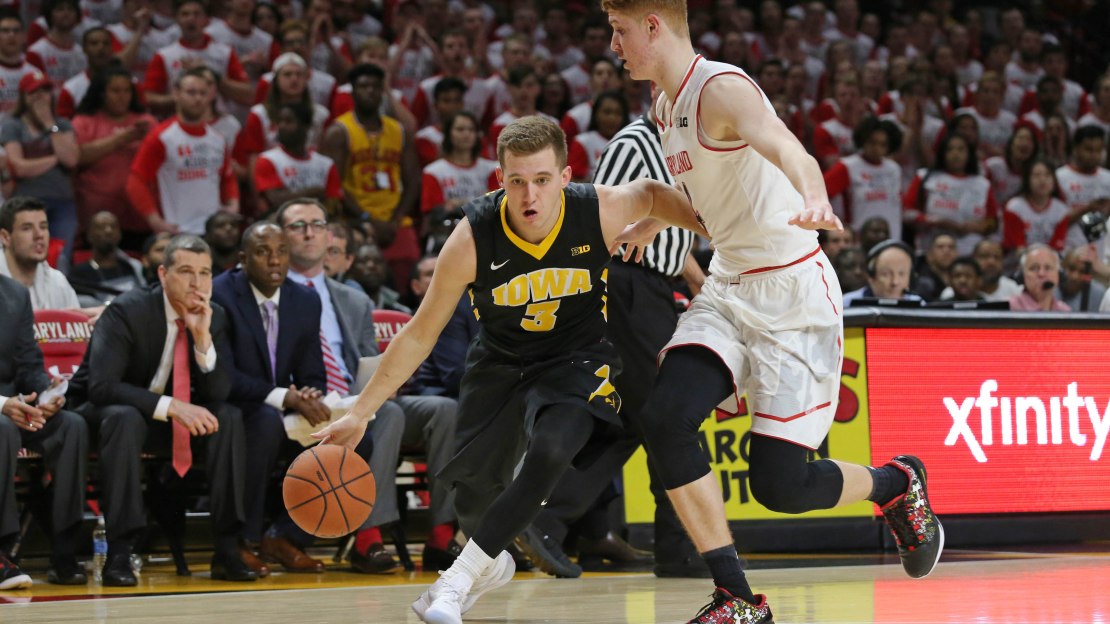 COLLEGE PARK, Md. (AP) The best performance of Jordan Bohannon's college career coincided with another ego-deflating effort by No. 24 Maryland.

As a result, Iowa got a feel-good victory and the Terrapins were left wondering how such an uplifting season could so quickly go awry.

Bohannon scored a career-high 24 points, hitting 8 of 10 3-pointers, and the Hawkeyes rolled to a surprisingly easy 83-69 victory Saturday night.

Bohannon came in averaging 9.2 points per game and shooting 37 percent from 3-point range. Cook, who's also a freshman, scored only eight points in the first meeting between the teams, an 84-76 Maryland victory on Jan. 19.

On this occasion, they mounted an outside-inside assault on the Terrapins' defense.

Bohannon's sharp-shooting performance came after he hurt his finger in practice Friday.

"Honestly, once the game started I didn't notice it," he said.

Maryland began the week playing for first place in the Big Ten at Wisconsin. That began a span of three losses in seven days.

"A week ago we had a ton of confidence. Three games later we don't," Turgeon said. "We've got to get that back, and it's up to me to figure out how to do it."

Eager to rebound from a home loss to Minnesota, the Terrapins came out flat against an Iowa team that had beaten only Rutgers on the road.

"What made us 22-4 was our mental toughness," Turgeon said. "We've just been so tough. For some reason, the last few games we haven't been."

Maryland's biggest lead was two points, and the Terps never led after relinquishing a 24-23 advantage midway in the first half.

Maryland went 11 for 34 from 3-point range and took only nine free throws.

"They had good looks and we didn't," Turgeon said.

The Hawkeyes went 8 for 12 from beyond the arc, outrebounded Maryland 20-14 and limited standout guard Melo Trimble to three points on 1-for-5 shooting.

Huerter opened the second half with a 3-pointer to give the crowd hopes of a comeback, but Bohannon nailed three 3s in a 10-1 spurt that made it 58-44.

Trimble finished with 10 points, going 1 for 9 from beyond the arc.

Iowa was well aware of its lack of success on the road before this game.

"We've been really hungry, just trying to get a road win, just trying to start our games the right way," Bohannon said. "We've had a lot of ups and downs, a lot of bad losses. But we just kept fighting."

Those seven road defeats include a pair of double-overtime setbacks.

Maryland welcomed back the team that went to two straight Final Fours, culminating with the NCAA national championship in 2002. Unfortunately, the current squad failed to impress.

"I wish we had played better for the players and coaches that were here," Turgeon said. "But we didn't."

Iowa: The Hawkeyes proved they can beat a decent team on the road, although Maryland has been struggling at home and away lately.

Maryland: The Terps need to right the ship in a hurry. They've dropped in the Big Ten standings and are sure to fall out of the Top 25 in the next poll.

Iowa: The Hawkeyes travel to Wisconsin on March 2 for their only regular-season meeting with the Badgers.