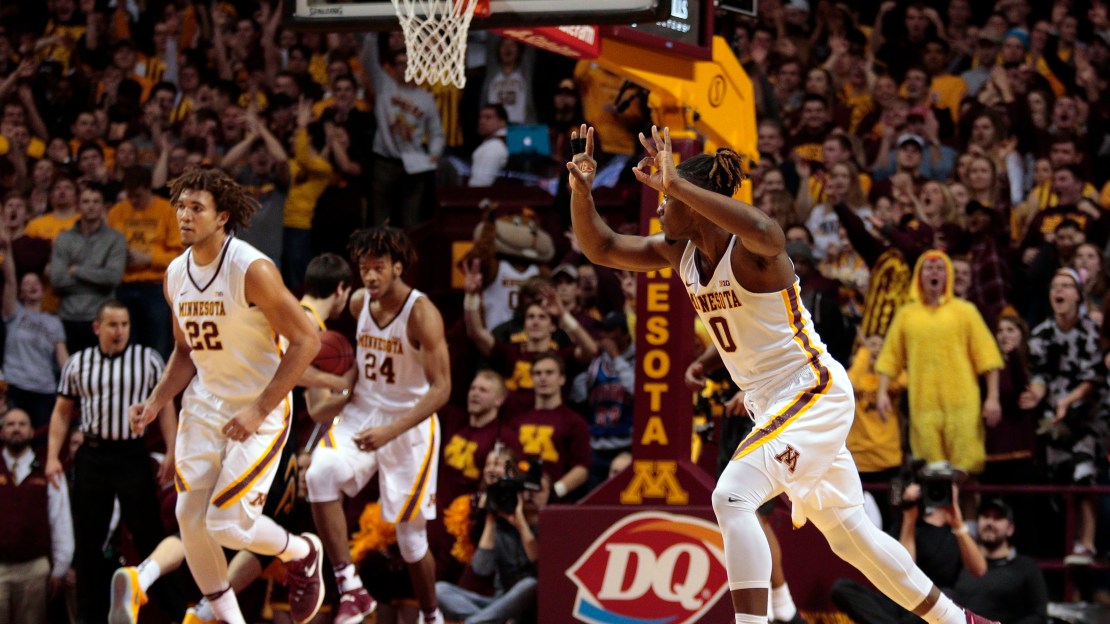 Two weeks left of Big Ten play with two teams tied atop the standings and the Terps on their trails? Let's go.

Below are three Big Ten basketball games to watch this week.

Maryland?s Big Ten title hopes took a blow Sunday with their loss at Wisconsin, but the Terps aren?t out of it yet. They?re one full game back of Wisconsin and Purdue with four games to go, and they definitely have the softest schedule the rest of the way. Three of the four (Minnesota, Iowa and Michigan State) will be at Xfinity Center, and the fourth is a short drive away at Rutgers. Anything can happen, but I expect the Terps to win out if they can take care of the Gophers Wednesday.

Minnesota is safely in the Field of 68 but virtually out of the conference title race, so they?re playing for Big Ten and NCAA Tournament seeding at this point. The Gophers have been rolling as of late as winners of five in a row, and their last loss came against this same Terrapins team three weeks ago at The Barn. The first matchup was a back-and-forth thriller that came down to the final minute, with Maryland adding late free throws to pad the 85-77 final. It was the fifth straight loss for a Gopher team that looked vulnerable to the possibility of their season sliding out of control at the time, but they?ve stabilized and then some since with five straight W's. Richard Pitino deserves a ton of credit for the turnaround he?s pulled off less than a year removed from a miserable season.

The Gophers have a tough task in the return trip to College Park. Priority number one when playing the Terps is always to try and contain Melo Trimble, but they can?t let Justin Jackson torch them again if they hope to win. Jackson dropped a career high 28 points and pulled down 10 rebounds at The Barn, and fellow freshman Kevin Huerter poured in 19. Minnesota will be in trouble if they can?t tighten the screws defensively in the rematch.

If Chris Collins' fist-pumping euphoria summed up Northwestern fans' reaction to seemingly securing an NCAA tournament bid during the Wildcats' win at Wisconsin, his father Doug's agonizing reactions from the stands down the stretch of last week's Rutgers game symbolized their fear that it could still somehow slip away. Yes, the Cats escaped with a 69-65 comeback win over the Scarlet Knights and Doug's blood pressure stabilized. But can you imagine if they had lost that game? I don't think it would have been enough to put Northwestern's tourney ticket in jeopardy, but the doubt definitely would have started to creep back into fans' collective psyche. With that disaster avoided, the Wildcats will hit the road this week with trips to Illinois and Indiana.

Meanwhile, the Hoosiers have dropped four consecutive games, and their season is currently on life support. A 2-0 week might get them back in legitimate NCAA tournament conversation, but they'll have to take care of Iowa on the road Tuesday before hosting Northwestern on Saturday. Those massive non-conference wins over Kansas and North Carolina are essentially Indiana's rubber water wings right now as the only things keeping them afloat, but at 15-12, a loss this week would probably crush their dancing dreams completely. Seeing as the Hoosiers are likely to lose one more game in the Big Ten Tournament, it's extremely unlikely they'd get into the NCAAs with 14 losses. Winning their four remaining regular season games could be their only path to an interesting Selection Sunday.

Despite Indiana's bad injury luck and bad number of losses this season, I still believe their remaining healthy roster is of NCAA tournament caliber. Thomas Bryant and James Blackmon Jr. are future pros, and Josh Newkirk and Robert Johnson can fill it up from deep. Even though Northwestern won the first round, 68-55 in Evanston, the Hoosiers were without Blackmon. Bryant (23 points) out-played Northwestern's Dererk Pardon down low (scoreless in 24 minutes), but Indiana got next to nothing from their backcourt. Blackmon should improve that immensely in Round Two. If Indiana can somehow pull off a pair of wins this week, it would give next week's game at Purdue some significance beyond bragging rights for the Hoosiers.

Michigan State still looks to be on the right side of the bubble, but the Spartans suffered a difficult blow when senior Eron Harris went down with a season-ending knee injury in last week's loss to Purdue. Two of MSU's remaining four games come against ranked teams in Purdue and Maryland, and I think they'll have to at least split those two to feel really confident about their resume. Despite winning four of their last six games, there's still work to be done, and I like their chances better at home against the Badgers Sunday than I do at Maryland on the final day of the regular season. Losing one of their remaining four games to Nebraska Thursday or Illinois next week would also be damaging.

Wisconsin will visit East Lansing in a fight for the Big Ten title, as the Badgers and Boilers entered this week tied atop the standings. All four games will be huge the rest of the way for both teams, and both have two road games this week. This will be the only meeting of the regular season between Michigan State and Wisconsin, and I'm very intrigued to see a pair of monstrous matchups in the post. Wisconsin senior Nigel Hayes will get the chance to put some old man moves on talented Spartan freshman Nick Ward, while Miles Bridges and Ethan Happ can take turns dazzling the crowd with completely contrasting styles of play. Bridges' brand of soaring athleticism usually doesn't stick around long in college basketball, while Happ's methodical suffocation of opponents on both ends of the floor has been fascinating to observe.

Sunday will have major implications for both teams. We know Wisconsin won't waver in a hostile road environment. It'll be interesting to see how this young Spartan squad responds to Tom Izzo throughout this critical final stretch of the season.