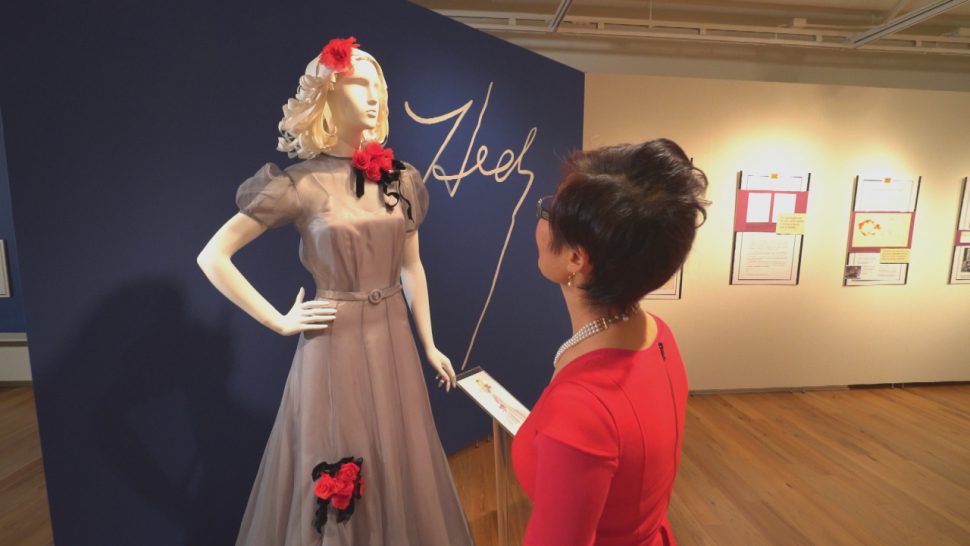 It?s 1939. Clothing designer and seamstress Hedy Strnad and her husband Paul are desperate to get out of Nazi-controlled Czechoslovakia.

Seeking safe haven in the U.S., Hedy sends correspondence to family members living in Milwaukee, Wisconsin. Along with her letters she sends samples of her dress designs and patterns; proof that she would be a hardworking asset to the nation.

Sadly, sanctuary never materialized for Hedy and Paul. Both were killed in the Holocaust.

But those correspondences, complete with her vibrant sketches, did survive and were uncovered by Hedy?s descendants.

Donated to the Milwaukee Jewish Museum, those letters – along with fully realized versions of Hedy?s designs – formed the body of Stitching History From The Holocaust, an exhibit that paints a unique picture of life in Prague at the dawn of WWII. It caught the eye of Dr. Soyeon Shim, dean of the School of Human Ecology at the University of Wisconsin-Madison.

?Hedy?s story is about the lives and talents of millions of people lost in the Holocaust,? says Shim. ?I wanted our students to experience [and] study that part of human history through their own work.?

To that end, Shim arranged for Stitching History to be temporarily displayed at UW-Madison?s Design Gallery. While germane to a myriad of majors, Shim saw a particular opportunity for students in her school?s textiles and fashion design program.

?Good designers learn from history,? Shim explains. ?There?s so much story interwoven through textiles. It?s about culture, it?s about history, it?s about economics, it?s about technology and they get inspired from that.?

The students were charged with exploring Hedy?s designs and using them as a starting point to create their own pieces, inspired by her aesthetic and story. For students like Paige Goodings, a senior in the fashion design program, it was as if they were working alongside Hedy.

?It?s a collaboration; it?s encouraging her pieces to continue,? explains Goodings. ?You have to consider who she was, the culture she came from and how that fits into your own signature. I hope that she?d be proud of my construction.?

Goodings incorporated what she calls Hedy?s ?inspirational and aspirational? style into a two-piece ensemble reflective of the rising feminism of the WWII era, when women entered the workforce in droves to replace the men that went off to war.

?Women were warriors on their own front,? says Goodings. ?They were asserting their rights in the workplace and doing their patriotic duty to help out.?

In late 2016, during the run of the Stitching History exhibit in Madison, the student-designed pieces were displayed alongside Hedy?s work. It was the largest show in the history of the Design Gallery, drawing roughly 1,500 visitors to the space that Shim says is as much about academics as it is about aesthetics.

?We educate people, we inspire people and we want to do that not just for our students, but for our community. They want to share this experience, that thread of human experience that unites us through Hedy?s story.?