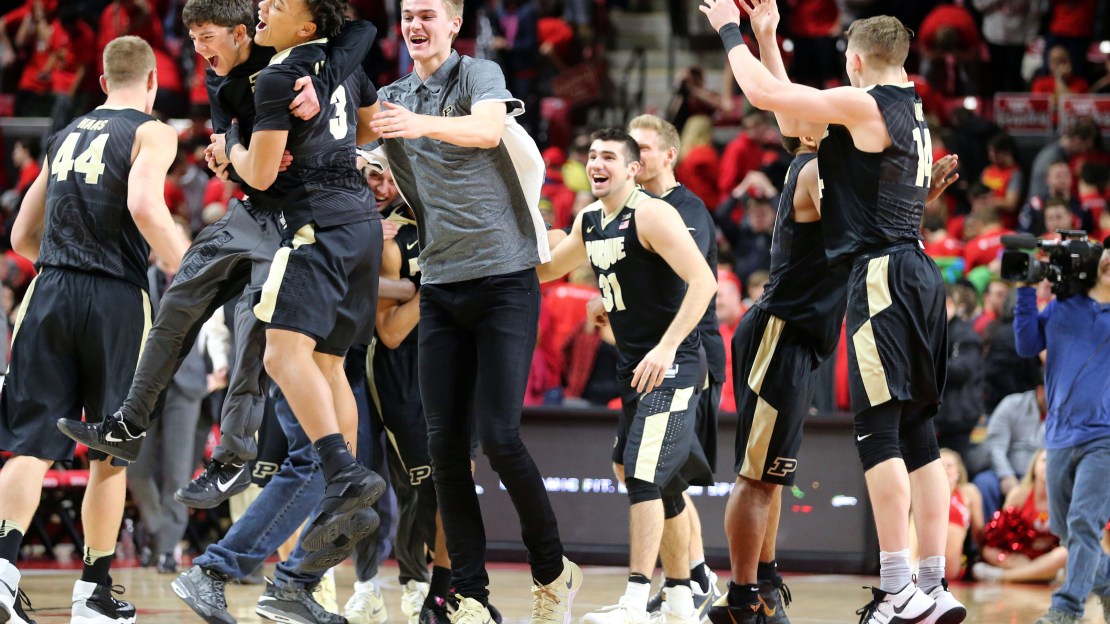 And then there was one: Wisconsin stands alone atop the Big Ten standings with a 9-1 mark, knocking off Illinois and Indiana this week to run its winning streak to seven games. Wisconsin sits alone in first place after Maryland saw its seven-game winning streak end on Saturday with a home loss to Purdue, which remains in the thick of the title chase with two wins over ranked foes this week.

Biggest surprise: Purdue. How about those Boilermakers? Purdue entered the week off a dispiriting loss at Nebraska vs. a Cornhuskers club that was riding a five-game losing streak. But Purdue regrouped and knocked off two ranked teams this week. First, the Boilers blasted No. 25 Northwestern, 80-59. Then on Saturday, Purdue prevailed at Maryland, 73-72, to end the Terrapins? seven-game winning streak, as freshman guard Carsen Edwards hit the winning free throws with 2.1 seconds left. It ended the Boilers? eight-game road losing streak to ranked foes. The loss also knocked Maryland out of a first-place tie with Wisconsin, which is now alone atop the Big Ten standings with a 9-1 record.

Biggest disappointment: Penn State. There was a buzz around the Nittany Lions when the season began, as Pat Chambers was breaking in a decorated freshman class that included Philadelphia-area studs in Tony Carr, Lamar Stevens and Mike Watkins. But the Nittany Lions have lost five of their last six, losing twice last week. And they were brutal defeats. First, Penn State lost a crushing triple-overtime game at Indiana, 110-102. Then on Saturday, the Nittany Lions suffered an ignominious loss at home to Rutgers, 70-68, the first time the Scarlet Knights had won a Big Ten road game since joining the conference in 2014-15.

Best game: Purdue at Maryland. Indiana's triple-overtime win vs. Penn State was exciting, for sure, but No. 23 Purdue's win at No. 17 Maryland was unmatched. Freshman Carsen Edwards hit the game-tying and go-ahead free throws with 2.1 seconds left, and it looked like Purdue had the win after Isaac Haas caught Kevin Huerter's football pass. Haas traveled, however, giving Maryland one last chance at a potential game-winner, which Huerter missed.

Best player: Caleb Swanigan, Purdue. The super sophomore broke the school record, previously held by 1994 national player of the year Glenn Robinson, for double-doubles in a season with his 19th on Wednesday vs. Northwestern (24 points, 16 rebounds). He notched his 20th double-double in a win at Maryland on Saturday, collecting 26 points and 10 rebounds to help Purdue overcome a 12-point second-half deficit.

Didn't expect to see these two ex-@IndianaMBB players in this group, did you? pic.twitter.com/ZC8ucBAW31

Best stat: 1, the number of Big Ten road wins for Rutgers after its victory Saturday at Penn State. The Scarlet Knights entered the game 0-23 on the road in conference play since joining in 2014-15. The last conference win was in 2014 against South Florida, an American Athletic Conference member.

Best stat, Part II: 54, The new Iowa freshman record for 3-pointers, now held by Jordan Bohannon, who still has at least eight more games to pad his lead in the record book.

Best dunk: Thomas Bryant vs. Penn State. After swatting a shot to lead to a transition opportunity, Bryant took a beautiful lob pass from Robert Johnson and made a smashing dunk.

Best block: If you missed Reggie Lynch reject Malcolm Hill's dunk attempt Saturday, do yourself a favor and check out the video below.

Best pass: Josh Reaves at Indiana. Some might say it was luck, but, hey, it kind of looks like Reaves knew what he was doing.

Was it a pass, Josh Reaves?

Doesn't matter, as it goes down as a @PennStateMBB assist. https://t.co/cQdK3dBqtO

Best photo: You know the phrase: The thrill of victory, the agony of defeat. This is that.

That about sums it up. ?

A look at the #Illini-themed light show during warmups. Social media night did that (they all had some app) pic.twitter.com/9kqiuPnUqp