Signing Day Notebook: Do you know these famous names? 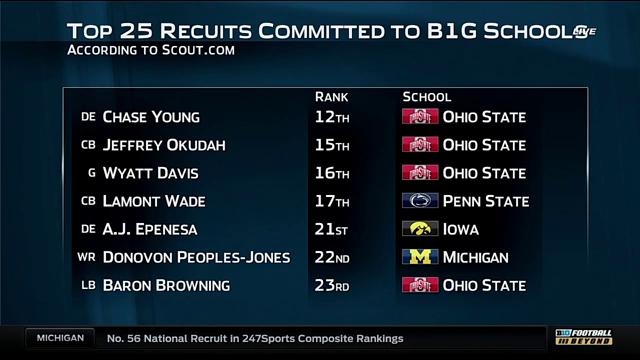 There aren't many things in life you can count on. But you almost always can count on Ohio State, Michigan and Penn State dominating the Big Ten recruiting rankings. Will it ever change? It may from time to time, but don?t expect OSU or Michigan to fall from their perch too often.

These schools are so steeped in history and tradition, with primo resources.

BEST CLASS: Ohio State
Big shock, huh? Urban Meyer is one of the best in the business. The last time OSU didn?t have the Big Ten?s top class? It was 2010. This is a top-five class nationally led by an impressive collection of defensive backs, with eight early enrollees overall in the class. In fact, this is one of the better recruiting classes in recent Big Ten lore. The best of the bunch is in the backend: DBs Jeffrey Okudah and Shaun Wade. Okudah may start this fall. The Buckeyes need this, as they lost some key defensive backs to the NFL. Other gems that are headed to Columbus include LB Baron Browning, QB Tate Martell, RB J.K. Dobbins, OL Josh Myers, DE Kendall Sheffield, WR Trevon Grimes, DE Chase Young and OL Wyatt Davis.

BEST OF THE REST: Michigan
Jim Harbaugh's passion continues to bear fruit–lots of fruit. The kids love seeing a 50-something=year-old man jump in a swimming pool to celebrate a commitment. He's Crazy Uncle Jim! And he'll do anything to get his man, or so it seems. Harbaugh?s hard work netted him top talent like LB Jordan Anthony, QB Dylan McCaffrey, DE Luiji Vilain, OL Cesar Ruiz, WR Tarik Black and DB Ambry Thomas. And Michigan landed a huge five-star DT in Aubrey Solomon on Signing Day. The other top get: WR Donovan Peoples-Jones, maybe the top player in the class who fills a big need.

BIG SURPRISE: Maryland
When DJ Durkin got the Maryland job in 2016, we heard a lot about his recruiting prowess. We saw glimpses of his acumen on the recruiting trail this time last year. Now, with over a year to recruit, Durkin unleashed his sales skills on the nation by signing what may be the top class in school annals. A big key: Keeping local talent home in an area Durkin calls the "DMV," D.C., Maryland and Virginia, a fertile recruiting region he wants to own. The Terps have the No. 4 class in the Big Ten despite going 6-6. DB Deon Jones and QB Kasim Hill lead the way. But the gem: RB Anthony McFarland.

BIG SURPRISE, Part 2: Illinois
Lots of love for Lovie Smith and Illinois, which enjoyed a nice haul. Some wondered if the 58-year old Smith had the want-to and gusto to recruit after being out of the college game for years. But, by the looks of this class, Smith is up to the task and has a nice staff that is buying in. He signed nine in-state kids, which was the combined total the last two years. The Fighting Illini did a good job in St. Louis and made an impression in Florida, too. Those are areas that must fuel this roster. Illinois? biggest additions are DE Owen Carney, WR Carmoni Green and WR Ricky Smalling.

THE RISING: Minnesota
P.J. Fleck had an impact at Minnesota-a big impact. We shouldn't have been surprised. When Fleck was at Western Michigan, he routinely out recruited several Big Ten schools. Now that he can sell a Big Ten brand, Fleck may push the Golden Gophers even higher up these recruiting rankings in coming years. It's going to be fun and exciting to watch. We are about to discover what the recruiting ceiling is in Dinkytown, as the program never has had a dynamic recruiter like this at the controls. OL Blaise Andries, RB Mohamed Ibrahim and DB Adam Beck are the top gets in a class that comes from 14 states and includes nine former Western Michigan commits.

THE UNKNOWN: Iowa
Iowa always lack pizzazz on Signing Day. No big deal, but it did get a boost from that fabulous 12-2 mark in 2015. This year?s class has a jewel in DE A.J. Epenesa, whose dad played at Iowa and is one of the most touted players in the nation. He should be the Hawkeyes? next great edge rusher and is Iowa?s five five-star recruit since 2005. Other gems are OL Tristan Wirfs, RB Kyshaun Bryan, DB Matt Hankins, QB Peyton Mansell and DB Djimon Colbert.

THE SLEEPER: Purdue
No roster in the Big Ten is more talent poor than Purdue?s. Jeff Brohm is recruiting as fast as he can, trying to inject some ability onto the roster. The Boilermakers have myriad needs, most notable: receiver, offensive line, defensive line and secondary. Brohm brought in a Big Ten-high five JC transfers and leaned heavily on his Western Kentucky commits, flipping six. JC DB T.J Jallow, DB Dedrick Mackey, JC WR Isaac Zico, WR Tyler Hamilton and QB Nick Sipe lead the way.

THE DISAPPOINTMENT: Wisconsin
Wisconsin rarely wows on signing day, often signing three-star players and developing them into stars. And the rankings of this class are held down by small numbers. But this class has some gems coming off a Big Ten West title. Some the more heralded signees: DE Andrew Van Ginkel, QB Jack Coan, OL Kayden Lyles and RB Jonathan Taylor. Lyles could be a future star on the line. And don?t be shocked if Taylor competes for time at running back as UW?s next top RB talent from New Jersey. Coan is interesting, as he was a top lacrosse recruit.

THE CONTENDER: Nebraska
Nebraska was a pleasant surprise, inking one of its better classes in recent history. It?s no secret: The talent level in Lincoln must improve-especially on defense. And Mike Riley?s staff made a big push to enhance the roster with this class. The sense of urgency in 2017 is palpable for a program that has switched defensive coordinators and defensive schemes, while the offense breaks in a new quarterback and offense more in line with what Riley likes to do. Maybe a few of these newbies can get on the field and help Nebraska push for its first conference title since 1999. The cream of the crop for the Cornhuskers are WR Jamire Calvin, WR Tyjon Lindsey, DE Guy Thomas, LB Avery Roberts, WR Keyshawn Johnson, Jr. and QB Tristan Gebbia.

BEST OF THE BEST: There was no shortage of top players to sign with Big Ten teams. What team leads the way? Ohio State. No big shock. The Buckeyes have seven of the Top 10 Big Ten signees, according to 247Sports.com.

BIG MOVERS: Like last year, Ohio State ranked No. 1 and Michigan No. 2 in Big Ten recruiting rankings, according to most services. But a few schools made big jumps. Among the biggest was Maryland. Last year, DJ Durkin?s first in College Park, the Terps were No. 8 in the Big Ten, according to 247Sports.com. This year, Maryland is No. 4. Another big mover was Illinois. The Fighting Illini were No. 13 in the Big Ten by 247Sports.com last year under Bill Cubit. This season with Lovie Smith leading the charge, Illinois is No. 9. And kudos to Rutgers, which went from No. 12 in 2016 to No. 8 this year.