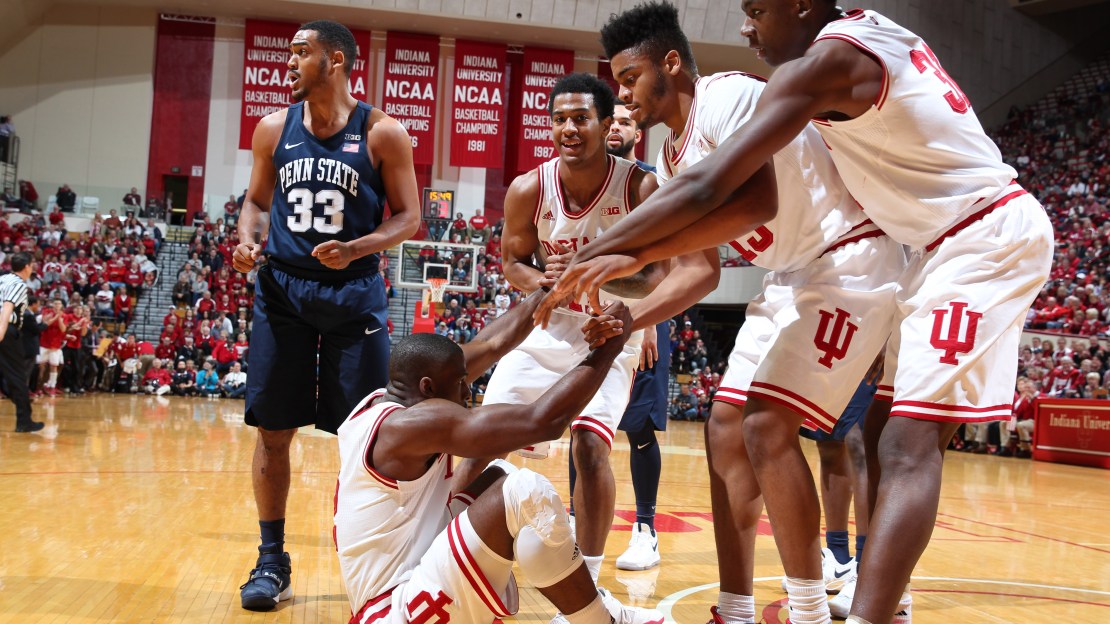 Newkirk hit a go-ahead 3-pointer for a 98-95 lead with 3:05 remaining in 3OT. The Nittany Lions (12-11, 4-6) then lost their composure as Indiana freshman guard Devonte Green stole the ensuing inbounds pass and scored on a layup for a five-point lead.

The Hoosiers led by as many as 10 points in the final overtime.

It's the second time in recent weeks that Penn State has had to accept such an emotionally draining loss.

Just two weeks ago, the Hoosiers' James Blackmon Jr. sank a 3-pointer at the buzzer for a 78-75 road win over Penn State.

But Blackmon is now sidelined indefinitely by a lower leg injury, and another key Indiana cog, forward OG Anunoby, is out for the season with a knee injury.

This time, Penn State was in position to win the game at the end of regulation as well as the first overtime. But Indiana freshman forward De'Ron Davis sank two free throws to tie it at 72-all with 3.9 seconds remaining in regulation. Then Newkirk's driving layup at the buzzer, eventually counted after a lengthy video review, tied the game at 80 at the end of the first overtime.

At the end of the second overtime, Penn State freshman guard Tony Carr sank a pair of foul shots to tie it at 73 with 4.5 seconds remaining. Carr scored 23 points.

Bryant, a 6-10 center, dominated inside with eight points in the third overtime.

Penn State: Losses in four of five road games has dropped the Nittany Lions in the conference standings, including below the Hoosiers, which increases the likelihood of a lower seed in the Big Ten Tournament and a possible early exit. Time appears to be running out on this team qualifying for a March tournament.

Indiana: Still recovering from losing its two best players to injuries, the Hoosiers are trying to figure out new roles for players who weren't counted on before to play lengthy minutes. The team needed this boost-of-confidence home win, especially when considering five of the last eight games are on the road. The Hoosiers are just 1-4 away from home.