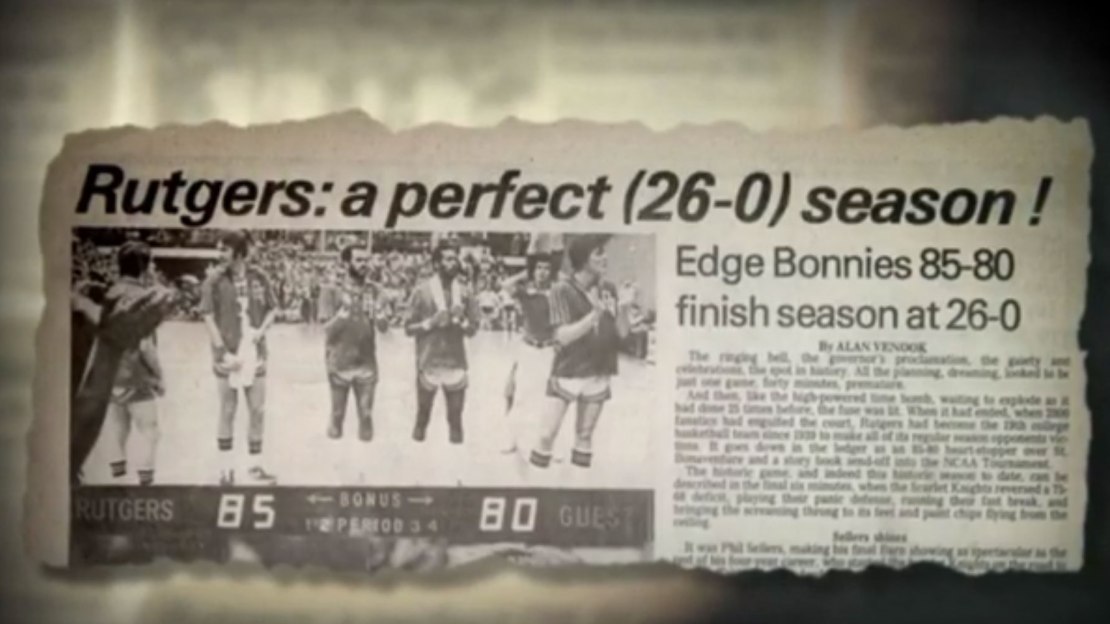 Meet the college basketball team that time has forgotten: The 1975-76 Rutgers Scarlet Knights.

It?s no one?s fault. It has just sort of happened. Sometimes, time and history can be cruel. But you should know about this team. You should care about this team. It was a lot of fun. And, it was very good. And it will be spotlighted as the latest "Big Ten Elite," debuting at 9 p.m. ET Monday. Here's a list of the re-airings.

It was a squad that featured four future NBA players and advanced to the holy grail of college basketball: The Final Four. In fact, the Scarlet Knights reached the Final Four in Philadelphia with a perfect record, sporting a sparkling 31-0 mark. But even that wasn?t enough to make Rutgers the star attraction at the Spectrum.

That honor went to an iconic Indiana team that also was unbeaten–and had a date with history.

?We had a special group,? Rutgers coach Tom Young told me. ?We knew before the season started that we had a chance to be good. We beat Larry Bird and Indiana State in the NIT the year before, the last time they lost before falling in the NCAA title game the next year. But to be unbeaten through the regular season? We couldn?t have envisioned that.?

"But once we got about 10 games into the season," Copeland said, "we started thinking maybe it was possible. We had an overtime game with Manhattan, but we took care of business. We saw what was possible and wanted to achieve it."

Well, it happened. At the time, Rutgers was an Eastern basketball force. But since the glorious 1975-76 season, the program has been to the NCAA tourney just four times, with the last being in 1991. And Rutgers hasn?t won an NCAA game since 1983.

?I was the coach of that team, too,? said Young. ?But when the Big East was formed, we had trouble recruiting. What?s sad is the Big East desperately wanted Rutgers to join. But the school opted to remain in the Eastern 8 for football reasons. The program never really has recovered. I think if Rutgers had joined the Big East back then, it wouldn?t be in the Big Ten now.?

Rutgers was fueled all season by a suffocating defense. Young preached a relentless style that featured lots of traps and presses.

?I would compare us to how West Virginia plays today,? said Young, now 84 and still sharp as he recalled those days to me over the phone.

And the Scarlet Knights generated a lot of offense off their defense. RU was an offensive juggernaut that ranked second in the nation in scoring with a 93.1-point average. Think about that: 93 points in an era when there was no three-point shot or shot clock. Rutgers scored 100 or more points in 11 of 33 games in 1975-76.

?We had some talent,? said Mike Dabney, a star guard on that Rutgers team who was drafted in the third round of the 1976 draft by the Los Angeles Lakers and is the father of former UConn star Maya Moore. ?We had a feeling we could be pretty good before the season started because we were good the year before (22-7 with an NCAA trip).?

The starting five of Dabney, Phil Sellers, Eddie Jordan, Hollis Copeland and James Bailey was quick and athletic. Sellers and Dabney led the way, averaging 19.2 and 19.1 points, respectively. Jordan, who would go on to coach in the NBA and at RU and was a second-round pick of Cleveland in 1977, averaged 14.1 points as the point guard. Sellers (10.2) and Copeland (6.7) were the top rebounders.

?Bailey was a key guy for us,? said Young. ?He was a freshman who we put in the lineup because of his athletic ability. He could protect the rim.?

And Bailey (the sixth pick in the 1979 draft) could dunk. Boy, could he dunk, which is why he was nicknamed ?Jammin? James.? Colorful nicknames were plentiful on this squad: Sellers was ?Phil the Thrill.? Dabney was ?Dip.? Jordan was ?Fast Eddie.? This was a rag-tag crew that epitomized the funky mid-1970s. There were afros, sideburns and beards all playing at a 100-mph pace. And by the time the NCAA tourney rolled around in 1976, the Scarlet Knights were getting some notice.

?After we won a game against Penn early in the season,? Young said, ?their coach Chuck Daly said he thought we had a chance to go unbeaten. I didn?t want him to say that.?

Daly, who would go on to gain fame as the Detroit Pistons coach, knew what he was talking about.

Back in those days, the NCAA tourney wasn?t the office pool, Cinderella, Road to the Final Four phenomenon that it is today. Heck, Dick Vitale-a Rutgers assistant from 1971-73 who wooed Dabney and Sellers to campus–hadn?t even chortled his first ?Baaaaabbbbbeeee! on cable TV.?

Vitale was coach at the University of Detroit. Back then, only 32 teams made the NCAA field. Oh, and teams weren't seeded. Amazing to think how the grand ?March Madness? event has changed. Rutgers was placed in the East Region, where the Scarlet Knights? season came close to ending.

?That game vs. Princeton was tough,? said Dabney. ?It was one of the closest times we came to losing. Princeton was on the line shooting free throws with a chance to tie or get the lead in the final seconds. And the guy missed both.?

Rutgers survived, 54-53, and then dumped UConn, 93-79, in the regional semifinals. With one more win, RU would be in the Final Four. To get there, it would have to beat ? VMI. The Scarlet Knights took care of business with a 91-75 victory. So, it was on to Philadelphia for the Final Four with bluebloods UCLA, Michigan and Indiana. Heady company for Rutgers.

"We were the underdogs in the Final Four, but we liked it that way," said Copeland, a third-round pick in the 1978 draft by the Nuggets.

The Scarlet Knights? ride ended in the national semifinals vs. the Johnny Orr-coached Wolverines, as they lost 86-70. Michigan went on to play Bob Knight and Indiana for the national championship, the first time two schools from the same conference would play for the title.

The Hoosiers capped an historic 32-0 season with an 86-69 win. An IU club led by the likes of Kent Benson and Scott May set a perfect standard that has yet to be duplicated. It was the start of a dominating run for Knight and Indiana, which would go on to win national championships in 1981 and 1987. Back in those days, a third-place game was played, and RU lost to Gene Bartow and UCLA, 106-92, to finish 31-2.

But what if Rutgers had finished with an unbeaten record as national champions?