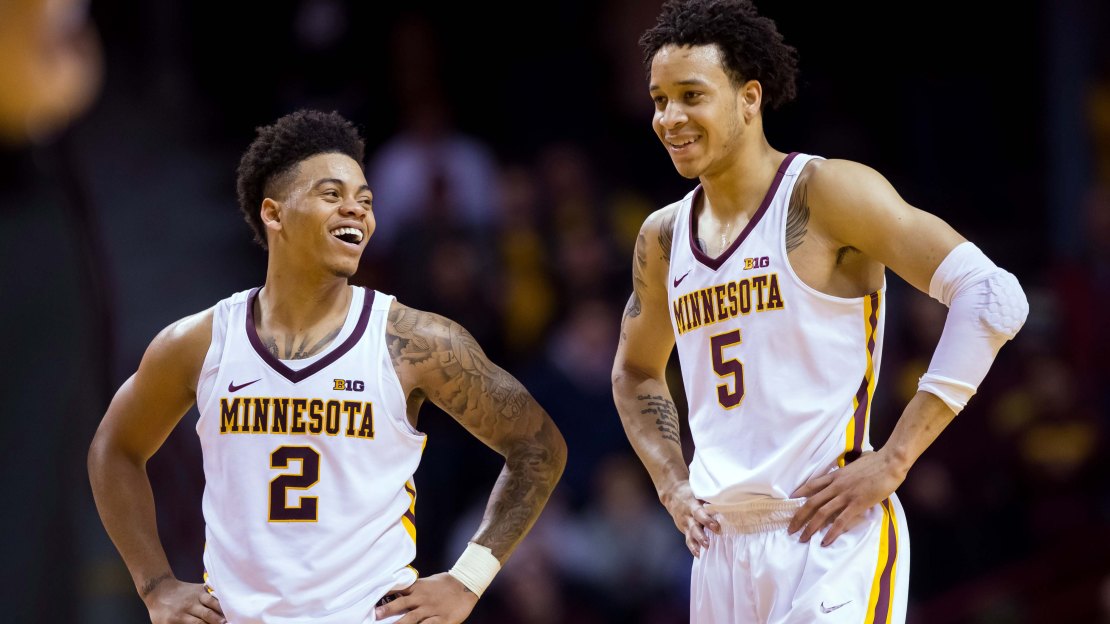 The Big Ten race got a whole lot more interesting, as Nebraska and Wisconsin each suffered their first conference defeats Sunday. Now, as we get ready to tip off Week 3 of conference play, Purdue, Michigan State, Nebraska, Minnesota, Maryland and Wisconsin all have one Big Ten loss.

Here is a look at the best of Week 2 action.

Biggest surprise: Minnesota. The Gophers went 8-23 last year, and 2-16 in the Big Ten-failing to win a conference road game. But look at them now. Minnesota is tied atop the Big Ten and is thinking big. A big reason for the Gophers? rise is the dynamic tandem of Amir Coffey and Nate Mason.

Biggest disappointment: Indiana. The Hoosiers are the defending Big Ten champ and looked poised to be a top contender this season. Alas, Indiana is off to a 1-2 start in the Big Ten, losing its first two conference tilts, both at home (Nebraska and Wisconsin) before knocking off Illinois on Saturday. IU entered conference play with seven wins in eight games and a 26-game home-court winning streak.

Top team: Purdue. A win at Ohio State followed up by handing No. 13 Wisconsin its first Big Ten defeat is something to celebrate. The Boilermakers showed Sunday that they are a serious Big Ten title contender, for any of those who doubted it before, and they may even be the favorite.

Top stat line: Glynn Watson Jr., Nebraska. The talented guard was sensational in a double OT win vs. Iowa, hitting 11-of-18 shots (seven of eight 3-pointers) for 34 points. He also added three rebounds and four assists. In the same game, Iowa?s Peter Jok also tallied 34 points on 12-of-24 shooting. It was quite a battle.

Top stat: 8, Consecutive double-doubles for Purdue star and early Big Ten player of the year favorite Caleb Swanigan, this after going for 16 points and 11 rebounds at Ohio State and 18 and 13 vs. Wisconsin. An even better stat: Swanigan has missed a double-double three times in 17 games this season.

Top moment: Nebraska pulled of an exciting 93-90 double-overtime win vs. visiting Iowa to move to 3-0 in the Big Ten. That made NU 3-0 in league play for the first time since 1975-76. Yes, the Huskers lost to at home to Northwestern on Sunday for their first Big Ten loss. Still, Nebraska has been a surprising early season story. The Huskers have a terrific tandem in Glynn Watson Jr., and Tai Webster. Watson averages 15.2 points, while Webster chips in 17.7. You would be hard-pressed to find many better guard duos.

Top dunk: On Sunday, Minnesota freshman Amir Coffey made a vicious drive to the basket and threw down a thunderous And-1 dunk. How good is the Golden Gopher legacy?

Top quote: "I think the league is as good and as even as it's been in my four years." – Northwestern coach Chris Collins

Top picture: I mean, come on.

Must get captions for this beaut. pic.twitter.com/KIAH1vpi2V

Top halftime entertainment: P.J. Fleck lends a hand to Red Panda. Red Panda is a Big Ten halftime staple, and it's always fantastic entertainment. On Sunday night, the new Minnesota football coach was part of the festivities. For real, and here's the proof.

Did you see this? With a win vs. Penn State, John Beilein notched his 200th victory at Michigan. He's closing in on the school record of 209 held by Johnny Orr. Beilein is in his 10th season with the Wolverines and took them to the Final Four in 2013.

No better way to celebrate 200 wins with ???than with a chorus of the Victors with your players!#Hail @JohnBeilein #GoBlue pic.twitter.com/x0DBllqpIH

Did you see this, Part II? Purdue light show. Light shows are cool, whether they happen in a football stadium or basketball arena. Purdue proved this yet again with a great display prior to Sunday's big-time matchup with No. 13 Wisconsin at Mackey Arena.

Keep your eye on: Penn State. Patrick Chambers and crew are going to be a factor in the Big Ten, perhaps as soon as this season. The latest example came Saturday in a clutch 72-63 win vs. Michigan State, the Spartans' first in Big Ten play, at the Palestra in Philadelphia. Lamar Stevens scored 18 points and Tony Carr had 14 to lead Penn State to a 72-63 win over Michigan State at the Palestra on Saturday. Stevens is a special player.