Rutgers researchers working on their own turf: BTN LiveBIG 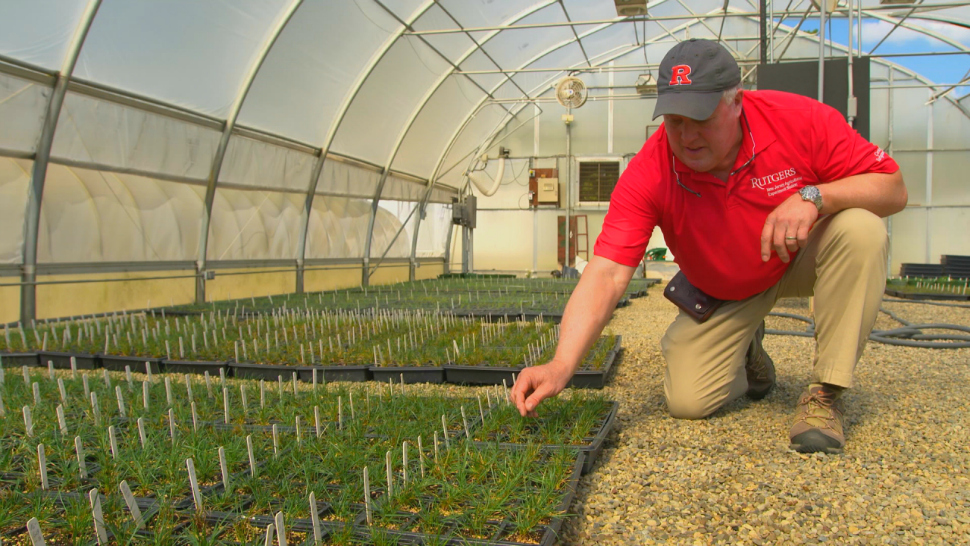 From golf courses to football fields to front lawns, a good portion of the planet that humans interact with is covered in grass. And that?s a good thing. Grass is generally good for the environment as it helps hold soil in place and helps that soil retain nutrients and water.

But what we think of as grass is actually a broad family of plants. As such, these plants are not one size fits all when it comes to environmental suitability. Some weather the cold, some withstand the heat, some thrive in a drought, others thrive under wet conditions. The wrong grass in the wrong environment can deprive surrounding plant life and soil of precious resources.

At Rutgers University, the Center for Turfgrass Science works year-round, optimizing grass plants for a variety of climates and uses.

?New Jersey is a perfect place to breed grasses,? notes Dr. Bruce Clarke, director of the center. ?We have extremely hot, humid summers and it?s a virtual torture tack for grasses.?

In addition to the natural hardships, Rutgers researchers also subject turf grasses to a variety of less-than-desirable manmade conditions. By treating the plants to things like salt water and waste water, they are helping to redefine what kinds of resources are needed for a healthy lawn. While mistreating the very thing one aims to study might seem to run contrary to mission, it?s one of the ways plant biologists and breeders figure out what works where.

?We?re developing grasses that use less water, less fertilizer, less pesticide,? says Clarke. ?[That] really reduces the footprint that we have on the environment.?

Turfgrass varieties developed at Rutgers have already been used in some pretty big venues such as the field of the famed Rose Bowl and the links of New Jersey?s Baltusrol Golf Club. They?re even being planted in some of the venues of the 2020 Tokyo Olympic Games.

That legacy is not lost on the center?s next generation of researchers.

?Being part of this team and helping the environment is very special,? says Meaghan Wells, an undergraduate majoring in plant biology with an emphasis in turf management. ?I never thought I would be able to help a worldwide community at this level and at this stage in my life. It?s really cool to see the immediate impacts and also long-term effects that will of this research that?s being done here.?