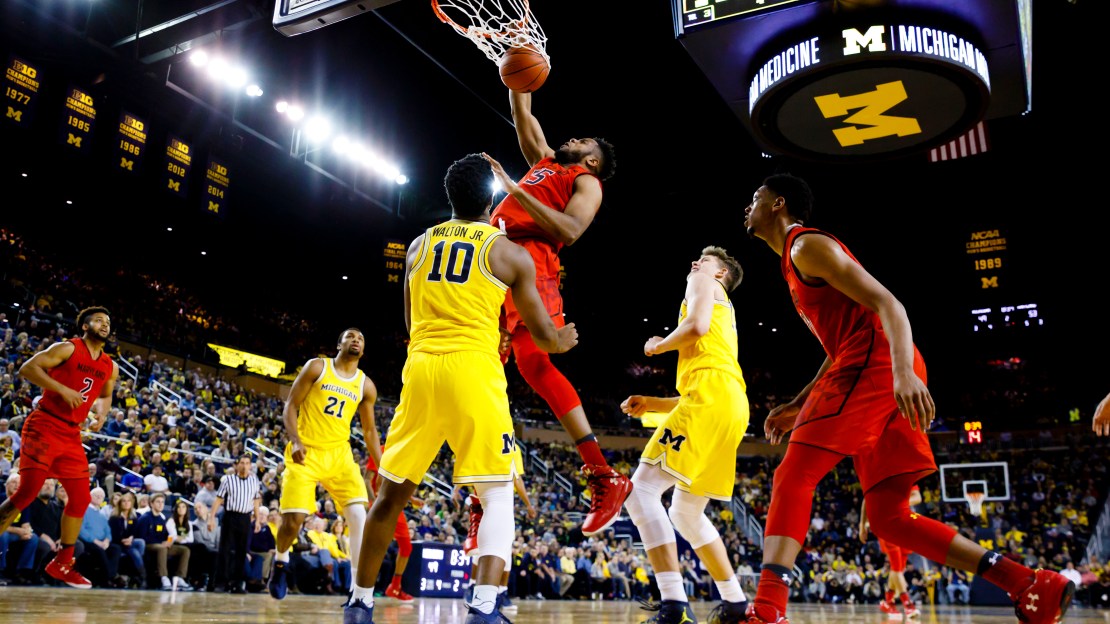 With Michigan bidding for another comeback win, the young Terps maintained their poise.

Jackson scored 15 points, and Maryland beat Michigan 77-70 on Saturday despite 62-percent shooting in the second half by the Wolverines. The Terrapins went 10 of 15 from 3-point range on the day, and they had an answer every time Michigan got close.

It was 71-68 when Jackson fought his way inside for a basket with 48 seconds left. Michigan's Derrick Walton Jr. drove for a layup – capping a streak of eight straight made field goals by the Wolverines – but Anthony Cowan calmly made two free throws at the other end, and Maryland held on.

The Terrapins have three freshman starters – Jackson, Cowan and Kevin Huerter. Maryland executed impressively throughout the second half, and the Terps made their final five shots from the field while Michigan was trying to rally.

"We're growing every single day, but other teams are too," Wolverines coach John Beilein said.

Jared Nickens made every shot he took for the Terps, going 4 for 4 – all from 3-point range. His performance fit in well on a Maryland team that rebounded nicely from a loss to Nebraska the previous weekend.

"We went through it against Nebraska. They made a run and we couldn't respond," Maryland's Melo Trimble said. "Today was totally different. Every time they made a shot, we came down, stayed (calm) under pressure and scored."

Moritz Wagner led Michigan with 17 points, but Walton had only five points and one assist. Damonte Dodd scored 15 points for Maryland, and Trimble added 13.

Maryland: The Terps won't shoot 67 percent from 3-point range every day, but this was certainly an impressive showing on the road. Maryland never looked remotely rattled, even though the game was close for most of the second half.

Michigan: The Wolverines came back from a double-digit deficit to beat Penn State earlier in the week, but another poor first half caught up with them.

"I think we wait to get hit in the mouth before we come out and play," Michigan's Zak Irvin said. "We can't let that happen. Even though it worked against Penn State – Big Ten, it's a tough conference. You're not going to be able to do that every game. It's just a lesson learned this afternoon."

Nickens was averaging only 2.7 points coming into this game, and he was shooting 26 percent from beyond the arc. That was hard to believe after his performance against Michigan.

"Jared has been doing great in practice for about six weeks," Turgeon said. "Knew it was a matter of time before he played like that."

Through three games in conference play, opponents are shooting 29 of 53 from 3-point range against Michigan. That number will almost certainly regress, which should give the Wolverines a boost defensively, but that's of little consolation for Michigan right now.

Michigan: The Wolverines are at Illinois on Wednesday night.