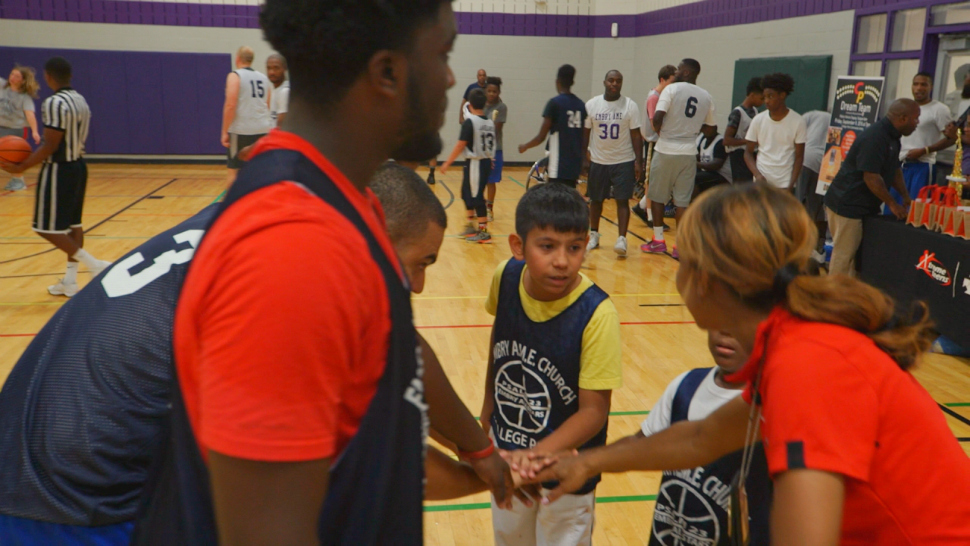 A group of kids gathers for a game of basketball at a community center in College Park, Maryland. There?s the usual crowd of cheering parents – making sure laces are tied tight. A cheerleading squad warms up, practicing moves for their halftime performance.

But this isn?t just any game. These children are members of the College Park Dream Team, and their teammates are members of local law enforcement agencies.

?The event we have is a friendly game with the youth in the community, the university police, Prince George?s police department and the park police,? says Gloria Aparicio, director of the University of Maryland?s Office of Community Engagement. ?We?re building communities, building relationships [and] building goodwill.?

The Dream Team?s quarterly hoops games got underway in 2012. Aparicio had been brainstorming ideas for how the university, local communities and local police could strengthen their ties. A suggestion by University Police Chief David Mitchell led her to arrive at basketball, the game serving as a lingua franca between groups.

?I met with the chief, and we talked about needing to build stronger relationships,? she said in a BTN LiveBIG interview from 2015. ?He suggested youth games, and I told him ?It will be more work for you.? He gets all the credit [for the idea] because I knew he would pick up the phone to his friends and the police, and it would be successful. He is well known and well-respected.?

Dream Team games are an event for the whole community, offering more than just basketball. Police officers bring with them equipment and vehicles to demo for the crowd. Local businesses, civic groups and churches sponsor the games and provide a meal the entire group can share.

The event is also a chance for the University of Maryland community to get to know the people who live around their campus.

?A lot of time the people who come to the university, they just go to the campus during the day and then they go elsewhere at night,? notes College Park Mayor Patrick Wojahn. ?[The Dream Team] gets them an opportunity to know and interact with the greater College Park community.?

That interaction is something that is important to the university from the top down, according to Aparicio.

?[Maryland President Wallace Loh] believes that in order to have a great university, we have to have a great community. We are finding ways of how we can be connected and be part of this vibrant community. And the beautiful thing about it is the kids are very excited to go and play with the police. [We] have become kind of a part of their growing up. So, we are very excited about seeing that.?