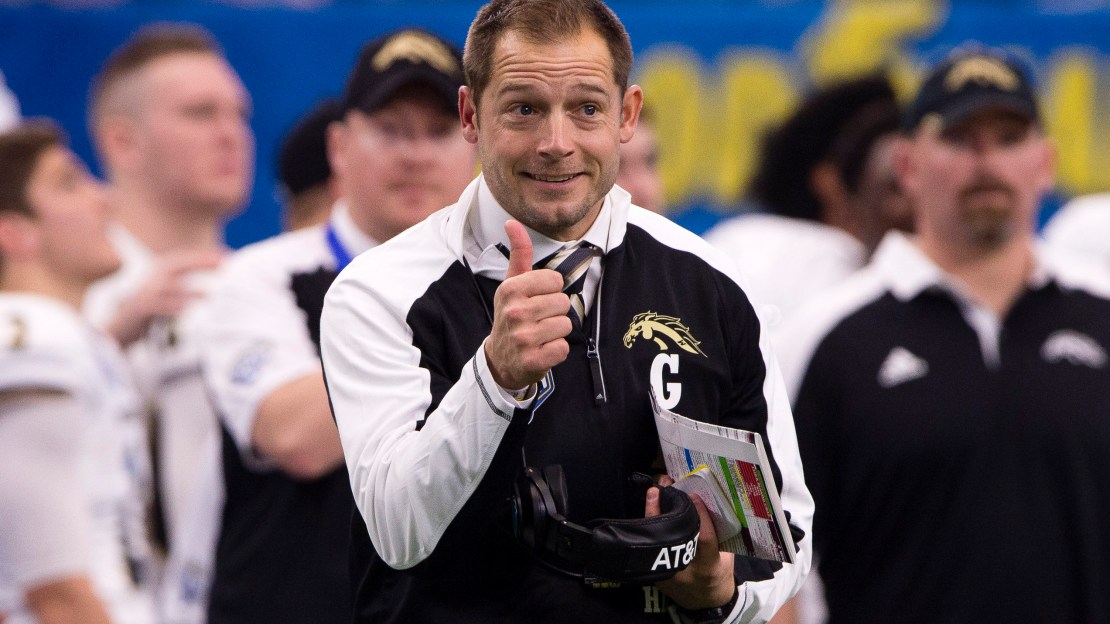 Get ready to ?row the boat,? Minnesota fans. Multiple reports this morning confirm that P.J. Fleck is taking over the Golden Gophers.

Fleck will be the fifth Golden Gophers coach since 2006, following Glen Mason, Tim Brewster, Jerry Kill and Tracy Claeys. And the arrival of the uber-upbeat Fleck should energize Minnesota. Will Fleck be the coach finally to author a long-awaited breakthrough?

No school in the Big Ten more than five years has a longer Rose Bowl drought, as the Gophers were last in Pasadena after the 1961 season. Everyone in Dinkytown yearns for more. For starters, how about beating Wisconsin? The Gophers have lost 13 in a row to Wisconsin in the battle for Paul Bunyan?s Axe. In fact, Minnesota has won the Axe just two times (2001 and 2003) since 1995. Fleck, known as a voracious recruiter, just may be the guy who can reverse that slide vs. the Badgers and take the program to the proverbial next level.

Fleck will inherit a solid program that went 9-4 last year and has been to a bowl each of the last five seasons. But the team was embroiled in the tumult of a player boycott that played a big role in Claeys losing his position less than two years on the job.

Enter Fleck.  Fleck just turned 36 at the end of November, which makes him the youngest Power 5 head coach in the country, barely beating out Iowa State?s Matt Campbell and Texas Tech?s Kliff Kingsbury.

He was one of the nation?s hottest commodities after building Western Michigan into one of the premier ?Group of Five? programs in the nation. The last four seasons in Kalamazoo, Mich., Fleck went 30-22 overall and 21-11 in the MAC. He took the Broncos to a bowl each of the last three seasons after a 1-11 debut in 2013.

Fleck saved his best for last, leading Western Michigan to a 13-1 overall record and an 8-0 MAC mark and league crown in 2016, earning a Cotton Bowl bid in 2016. The season was highlighted by road wins over Big Ten foes Northwestern and Illinois.

Fleck has risen through the coaching ranks quickly. He began his coaching career as a G.A. at Ohio State in 2006 under Jim Tressel. From there, he coached receivers at Northern Illinois (2007-09) under Joe Novak and Jerry Kill and then coached receivers for Greg Schiano at Rutgers (2010-11) and with the Tampa Bay Buccaneers (2012). Fleck then landed the Western Michigan job.

At Western Michigan, Fleck famously embraced the mantra ?row the boat,? as a rallying cry for the program and fans. The phrase was everywhere and oars were ubiquitous. It?s all about grinding every day and everyone working together.

A native of the Chicago suburbs, Fleck was a plucky walk-on wideout at Northern Illinois from 1999-2003, driven by an insatiable desire to succeed. And, he did. Fleck then matriculated to the NFL, where he defied the odds again by spending time with 49ers (2004-05).

Now, Fleck is ready to try to make Minnesota a force in the Big Ten. It should be fun.

FOX 9 has learned through multiple sources that PJ Fleck has a tentative agreement with #Gophers to be the next head coach. 6-yr, $21M range