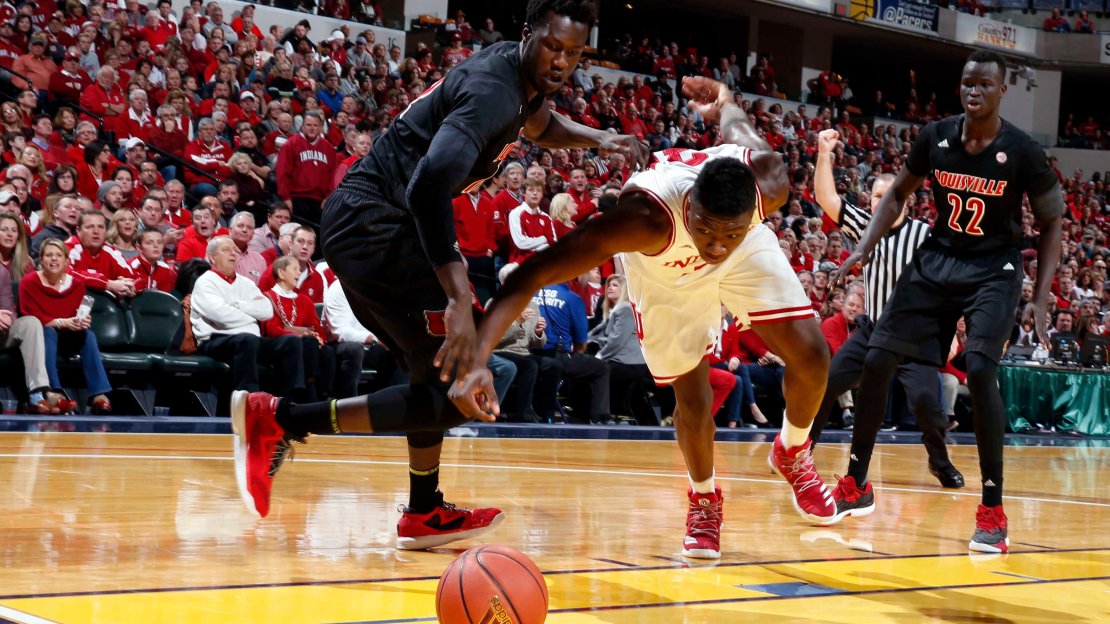 Before Wisconsin and Indiana tip off the second week of Big Ten play Tuesday night, let's take a look at three of the biggest things on my mind following a wild and unexpected opening week.

Indiana was unbeatable at home last year, but Nebraska showed up on opening night and put an end to the Hoosiers' 26-game home winning streak. Indiana also was humbled this past weekend by an elite Louisville squad in Indianapolis. It?s true that Indiana hasn?t been shooting like they are capable of and that its defense is in disarray, but most surprising is how reckless they have been with the ball (19 turnovers vs. Nebraska, 14 vs. Louisville). In fact, Nebraska came up with 13 steals! A team that plays as fast as Indiana is bound to turn the ball over, but so many of the turnovers are self-inflicted. This has to be corrected, and quickly. Point guard Josh Newkirk has some head-scratchers, but unforced errors have become contagious. Wisconsin will make Indiana suffer on defense if it doesn't protect the ball. This is a big story going forward regardless of who wins Tuesday night. The Hoosiers will find their rhythm offensively, and they have good defenders who should figure it out. But when they turn the ball over, they limit their chances and have proven that they are just as capable of losing to Fort Wayne and Nebraska as they are of defeating Kansas and North Carolina.

Who was more impressive in the Minnesota-Purdue instant classic: Nate Mason or Caleb Swanigan? Biggie has been making headlines all season and is currently a first team All-American candidate. The Purdue forward now has a historic three 20-20 games in his last four appearances! Mason has been flying under the radar as Big Ten country has been holding off judgment on the Gophers until they prove themselves in conference play. So far, so good. After losing a big lead to Michigan State on opening night, Minnesota found the strength and outplayed Purdue on the road and sent a message that last year?s woes are history. Mason was lethal in the overtime thriller, scoring 32 points and dishing out 11 assists. He made tough shots look easy. My biggest concern with Minnesota is late-game execution. Mason has proven he can hit big shots, but he needs plays run for him when every defender keys on him, and counter plays if he is shut down. Richard Pitino and his staff must make the most of their timeouts in late-game situations. They proved in West Lafayette they can beat anyone in this league.

No backcourt in the league had a more successful week than Nebraska?s Tai Webster and Glynn Watson Jr. The dynamic duo was brilliant in the Huskers' shocking wins at Indiana and Maryland. Webster averaged 19.5 points, 3.5 assists, 3 steals, and 3 rebounds while shooting 52 percent from the floor. Webster is also one of the best defenders in the league. Watson was equally impressive and hit clutch jumpers throughout both contests. He averaged 21.5 points and stole the ball eight times in the two victories. Nebraska entered conference play as one of the worst 3-point shooting teams in the country, only to hit 9-of-18 attempts. If the Huskers can become, even, an average shooting team over the next few weeks, everything in the scouting report changes. Opponents will have to extend their defenses, which will open up driving lanes for Webster and Watson. That?s an impossible assignment for most of the defenders they will face.