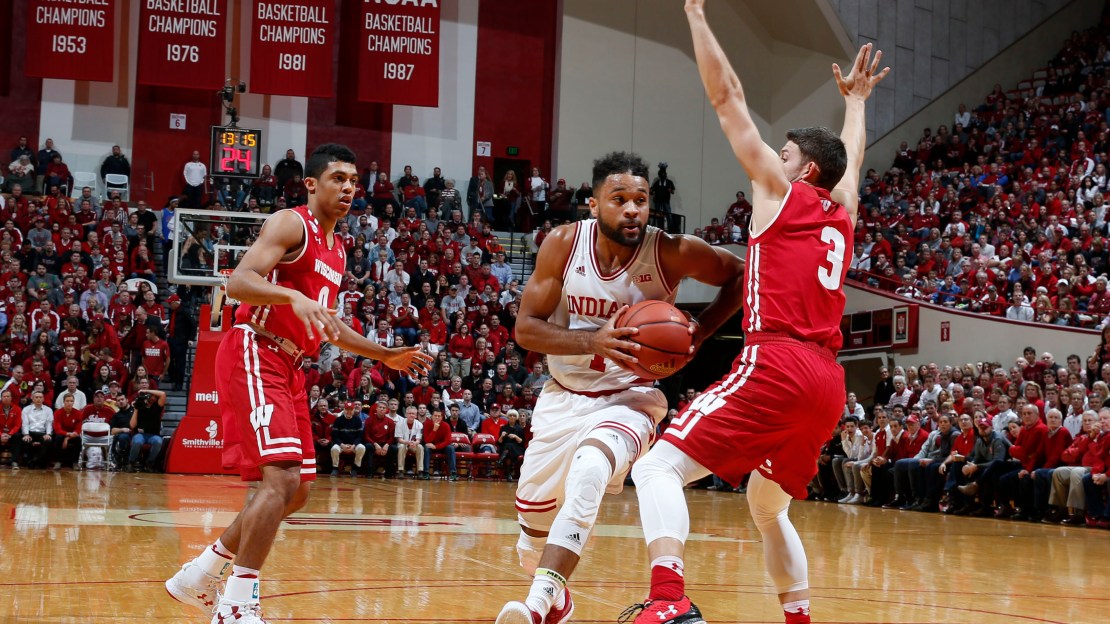 In between, the Badgers made Indiana pay a heavy price for its mistakes.

Ethan Happ scored 19 points, Bronson Koenig had 17 and Wisconsin used a 14-point scoring advantage off turnovers to hold on for a 75-68 victory at Assembly Hall.

That's one reason the Badgers (13-2, 2-0 Big Ten) extended their winning streak to nine by snapping a two-game losing streak in Bloomington.

And they made it look easy in the game's three most crucial sequences – a 13-0 run at the start, a 10-2 spurt late in the second half to retake control and four straight free throws made in the final minute.

For Indiana, it's been a mind-boggling week.

Now they have lost three straight, two in a row on their home court and 16 of 18 in the Wisconsin series.

Indiana shot 53.1 percent from the field, made 5 of 15 from 3-point range and outrebounded the Badgers 32-25 – numbers that are normally solid enough to produce a win.

But because Wisconsin converted 13 turnovers into 23 points and only gave up nine points on its seven, the Hoosiers (10-5, 0-2) came up short.

"The problem with tonight is we had six turnovers in the first half and they scored two points on every one of them," coach Tom Crean said. "Against the best teams, you can't have bad segments."

De'Ron Davis, Juwan Morgan and Robert Johnson each finished with 12 points to lead the Hoosiers, who took their last lead at 57-56 with 7:06 to play.

Wisconsin responded with a 10-2 spurt, taking a 66-59 lead with 4:30 to play, and Indiana couldn't get closer than three the rest of the game.

"Every team wants to get up and down the court, get a lot of good shots in transition. They got a couple too many tonight," Wisconsin's Zak Showalter said after scoring 14 points. "But I think we were really able to take them out of what they wanted to do tonight."

Wisconsin: The Badgers are still the Big Ten's king of the road. By picking up their 50th win outside the Kohl Center over the past four seasons, Wisconsin is on pace to extend its league record by finishing in the Big Ten's top four for a 17th consecutive season.

Indiana: An old nemesis made life tough on the Hoosiers. The Hoosiers have lost six of the last eight to the Badgers at Assembly Hall and their chances of repeating have taken a big hit after losing both conference games at home.

Nigel Hayes always seems to be a thorn in the side of the Hoosiers defense. This time, Crean went big and slowed him down.

Hayes finished 10 points and had two rebounds but was just 2 of 3 from the free throw line. In the previous three games against the Hoosiers, Hayes was 30 of 39 on free throws. Afterward, Crean acknowledged he brought Johnson off the bench because he didn't want a three-guard lineup against Wisconsin.

Crean was as confounded as Indiana fans by the inexplicable opening minutes. Morgan had an explanation.

"We just didn't come out with the right mindset," he said. "I don't think everybody was ready to fight. It was just a mental lapse in the coverages and it was just small mistakes that could have been prevented."

Wisconsin: Completes the second part of its Hoosier State doubleheader with a visit to No. 20 Purdue on Sunday.

Indiana: After consecutive games against top 15 foes , the schedule might get a bit easier when Illinois visits Saturday.