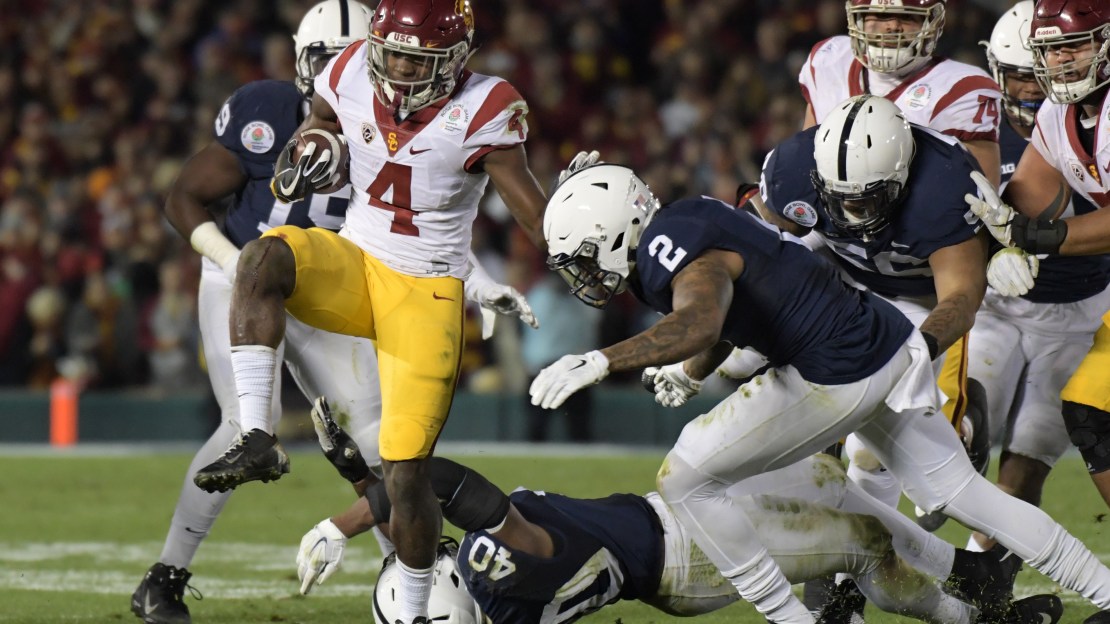 (AP) Matt Boermeester kicked a 46-yard field goal as time expired, and No. 9 Southern California rallied from a 14-point deficit in the fourth quarter for a spectacular 52-49 victory over No. 5 Penn State on Monday night in the highest-scoring Rose Bowl ever played.

Freshman Sam Darnold passed for 453 yards and five touchdowns while leading a jaw-dropping comeback for the Trojans (10-3), who won their ninth consecutive game and won their first Rose Bowl since 2009.

"It was a whole team effort," Darnold said. "That's the way it's been all year. We never gave up."

The Trojans were almost finished when they trailed 49-35 with nine minutes to play, but Darnold and the Trojans had something extra in one of the most entertaining chapters in the 103-game history of the Granddaddy of Them All.

Deontay Burnett, who had three TD catches, caught a tying 27-yard scoring pass from Darnold with 1:20 left to cap an 80-yard drive in 38 seconds with no timeouts available.

Leon McQuay III then intercepted a long pass by Trace McSorley and returned it 32 yards to the Penn State 33 with 27 seconds left to set up Boermeester, who missed two earlier field goals.

The junior confidently drilled the Rose Bowl winner, and he sprinted away to celebrate amid pandemonium in the packed stadium.

McSorley passed for 254 yards and threw two of his four touchdown passes to Chris Godwin for the Nittany Lions (11-3), whose nine-game winning streak ended in heartbreaking fashion.

Saquon Barkley rushed for 194 yards and two TDs for the Nittany Lions (12-2), who followed up their 21-point comeback in the Big Ten title game with another ferocious rally.

With one jaw-dropping play after another from two talent-laden offenses, the teams obliterated the combined Rose Bowl scoring record in the third quarter, surpassing Oregon's 45-38 victory over Wisconsin in the 2012 game.

The Nittany Lions' offensive stars put together a highlight reel for the ages during a 28-point third quarter. After trailing 27-21 at the break, Penn State scored three touchdowns on its first three snaps of the second half: a stunning 72-yard run by Barkley, a jaw-dropping bobbled 79-yard catch by Godwin and a 3-yard TD run by McSorley after an interception return.

Penn State: The Nittany Lions' magical season culminated in an extraordinary heartbreaker, but this collapse won't hurt their prospects for 2017 and beyond. Penn State is firmly back on the national stage, and a wealth of talent will return to defend the Big Ten title.

USC: The defense had been remarkable since USC's 1-3 start to the season, but it couldn't stop Penn State's big-play stars. Darnold made sure it didn't matter, and he'll be back next year as an immediate Heisman Trophy candidate looking to add more achievements while raising his profile in the pantheon of Trojans quarterbacks.

Although both teams will have gaps to fill from departing stars, Penn State and USC should both be among the top preseason candidates to get to the College Football Playoff next season. After this postseason showcase for recruits and fans, the future is bright for two proud programs firmly restored to their former glory.