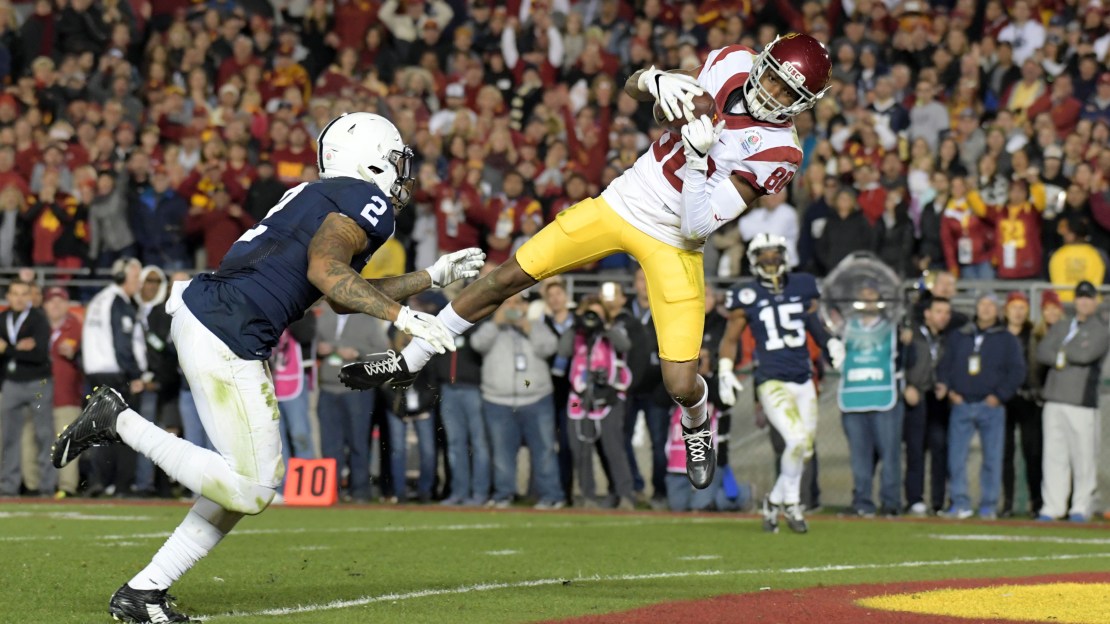 This was one of the most anticipated non-playoff games on the bowl calendar. And, it lived up to the hype.

Penn State came in riding a nine-game winning streak and sporting a Big Ten title after an inglorious 2-2 start. USC had an eight-game winning streak at kickoff tonight, rebounding from a 1-3 start. And each team could credit stellar QB player as a key to their rise, with sophomore Trace McSorley leading the surprising Nittany Lions and Pac-12 Freshman of the Year Sam Darnold pacing the Trojans.

This rematch of the Rose Bowl after the 2008 season didn?t start well for Penn State, as McSorley tossed interceptions on the Nittany Lions? first two possessions and was 1-for-6 as PSU trailed 13-0 after the first quarter. But Penn State caught fire after that sleepy opening 15 minutes, scoring 21 second quarter points and 28 more in the third quarter. In fact, the Nittany Lions scored TDs on seven consecutive possessions and on its first three plays of the third quarter (four consecutive plays going back to the second quarter).

But Penn State went cold in the fourth quarter, failing to score a point and blowing a 14-point lead to allow USC to tie the game with 1:20 left. Then, the Trojans got the ball back on an interception and returned it to the 33-yard line of Penn State with less than a minute to play. That set up the Trojans for a 46-yard field goal to win the game. And Matt Boermeester delivered as time expired to win a classic Rose Bowl, 52-49.

In honor of the great Keith Jackson: Whoa, Nellie!

BEST OF THE ROSE BOWL

Best play: The start of the second half provided several highlights for the Nittany Lions. None, though, were better than Saquon Barkley's stupefying 79-yard TD run that left USC fans stunned. He zigged, zagged and generally made the Trojans look silly.

Best player: USC QB Sam Darnold. Saquon Barkley showed why he won the Chicago Tribune Silver Football as the Big Ten MVP. The super sophomore ran wild in Pasadena, carrying 25 times for 194 yards and two TD, to go along with a receiving touchdown. But even that effort was overshadowed by Darnold, who hit 33-of-53 passes for 453 yards, five TDs and a pick. He and Barkley will be top Heisman contenders in 2017.

Best moment: As great as Penn State's three touchdowns on three snaps to open the third quarter was, it's difficult to top the hysteria of the walk-off game-winning field goal by USC's Matt Boermeester, who hit 3-of-5 on the night.

Best stat: 101, the most combined points in the history of the Rose Bowl.

Unfortunately, someone had to lose. pic.twitter.com/kNPkbiIWsA

Offense: A. The offense got off to a slow start, but it caught fire in the second quarter. Credit the line, which looked to be overmatched early on but settled in vs. a fierce Trojan front. Trace McSorley continues to show his vast skills, hitting 18-of-29 passes for 254 yards with four TDs and three picks. And wideout Chris Godwin enjoyed a game for the ages, making nine receptions for 187 yards and two scores.

Defense: C. The unit gave up yards (575) and points (52). No shame in that, as this is a talented and explosive USC offense that saw WR Deontay Burnett make 13 catches for 164 yards and three TDs and JuJu Smith-Schuster grab seven passes for 133 yards and a score.

Special teams: B. This unit was solid. No big mistakes, but no big plays. Just solid. Punter Blake Gillikin did a great job.

Some felt Penn State deserved a spot in the four-team playoff after winning the Big Ten and beating Ohio State along the way. Alas, the Buckeyes got a spot and promptly got smoked by Clemson. Penn State finished No. 5 in the final College Football Playoff poll. With the way the Nittany Lions performed in the Rose Bowl, you have to wonder how they would have fared in the playoff vs. Clemson. Regardless, this was a watershed game that loudly trumpeted Penn State?s return to national elite status just five scant years after the program was hammered by severe NCAA sanctions. It has been an incredible rise for the Nittany Lions, who have a bright future. How much fun will it be to watch Ohio State, Michigan and Penn State battle in the Big Ten East? And don?t forget about Michigan State.

A look toward 2017: The future is bright for Penn State, which enjoyed an unexpected breakthrough in James Franklin?s third season with a Big Ten title. This is a young team that will welcome back QB Trace McSorley, RB Saquon Barkley, four linemen, TE Mike Gesicki and a raft of wideouts led by Chris Godwin. The defense loses just a handful of key guys, including LB Brandon Bell, E Evan Schwan and S Malik Golden. Long story short, Penn State may repeat as Big Ten champ next season and have a good shot at making the playoff. And Barkley will be one of the nation?s top Heisman contenders.