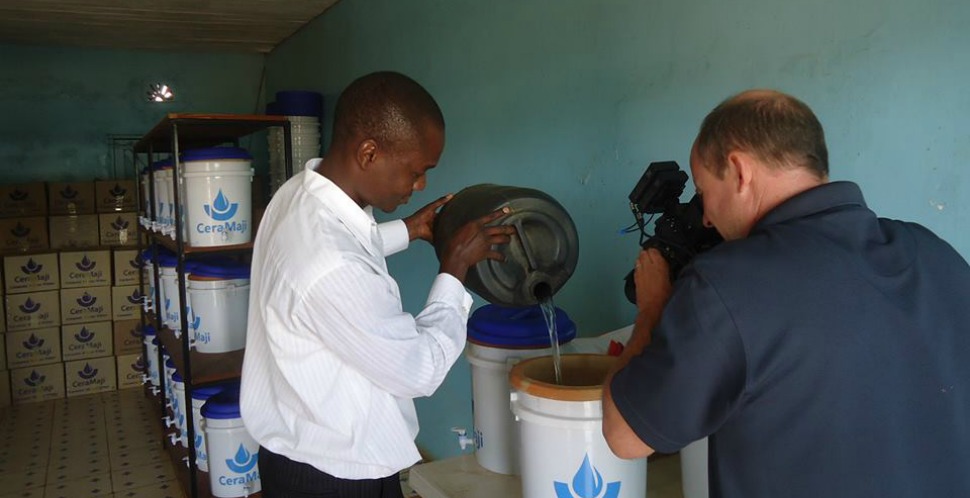 It?s a commonly accepted notion that strong schools build strong communities. This is due, in part, to the way schools connect members of a community through information-sharing and social support.

For all these reasons, when a Kenya-based startup affiliated with Purdue University?s innovation hub Discovery Park wanted to provide clean drinking water to communities around the world, they chose schools as a place to provide both the water and education about the technology used to deliver it.

John Maiyo is a PhD student at Purdue University and the CEO of Maji Safi – the name means ?safe water? in Swahili. True to its name, Maji Safi helps communities create clean, drinkable water through the use of ground wells, ceramic filters and slow sand filters in buckets – all developed by Purdue.

?Our first project we were hired to do was from Discovery Park at Purdue who gave us our first contract,? says Maiyo. ?[From there], we were able to sustain ourselves and that is when we started collaborating on a faucet filter.?

The filter utilizes both technology and natural scientific processes: Standard plastic buckets or drums are first filled with sand and water. Microbes in the sand break down any harmful organic material in the water, which collects in a plastic filter covered with mesh. Some chlorine is added at the end to eliminate any additional harmful matter.

Maji Safi has built ten filters in schools in Kenya along with filters in Colombia, India and China with plans to install filters in 1000 schools around the world in the next five to ten years.

As with any community-focused work, Maji Safi found success in matching its efforts with the needs of the people who live there. According to Maiyo, Jafvert and Howarter, Maji Safi ground wells can be expensive, sometimes as much as $4000 to build and maintain. But faucet-based filters could be built and distributed at a much lower cost with significantly less infrastructure concerns.

But Maiyo says the biggest problem his company faces is education.

?Our competition actually is not another filter,? he says. ?It?s non-use. The biggest challenge really is not convincing people that this technology is better. It?s convincing them that they need to do something in the first place. Most of the schools, most of the families we?re trying to get to use these filters don?t actually use anything. 50% of those who claim to boil don?t do that. That is where we come in.?

?The biggest challenge from a design or engineering perspective is the solution should be simple and affordable,? says Maiyo. ?It doesn?t need people to make that much change from what they are already doing.?

The need for education and consistent monitoring – as well a desire to find a central gathering place for the community – led Maji Safi to focus on schools as a distribution point for the filters.

?It both establishes credibility and then the schools are big network points,? Howarter says. ?Each one of those kids is going to go home and maybe tell their parents about how the water is different in school now than it is at home. By making an installation in one school, it has the impact in Kenya of reaching hundreds of households.?

Maiyo says by working with schools and communities, he hopes Purdue can develop a method of distributing and teaching new technology for areas that lack it. But Jafvert says the benefits are there for Purdue as well.

?It translates further into education for Purdue students in understanding what the needs are in the developing world.?