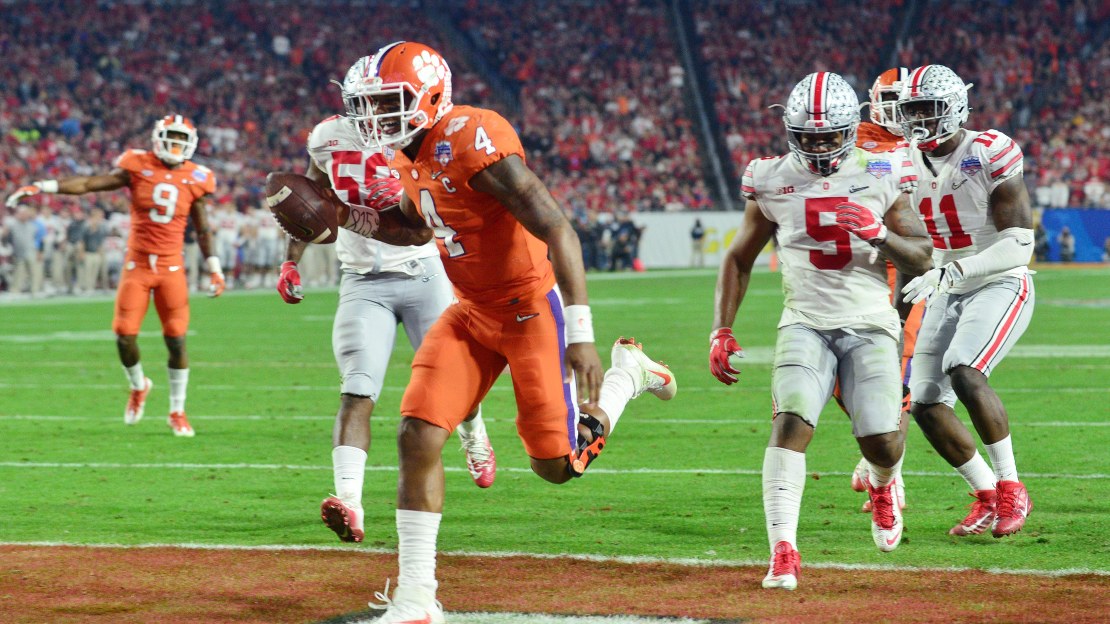 (AP) In a return trip to the desert, Clemson found redemption through utter domination.

Part I of Dabo and Deshaun's make-good tour is done. Now comes the really hard part: A rematch against Alabama in the College Football Playoff national championship game.

Deshaun Watson ran for two touchdowns and threw another and No. 3 Clemson crushed No. 2 Ohio State 31-0 Saturday night in the Fiesta Bowl.

Tigers coach Dabo Swinney had sold his players on getting to celebrate at the same site where they lost to Alabama in the national title game last season. This time they got the confetti shower and the trophy at the University of Phoenix Stadium.

With that taken care of, it is on to Tampa, Florida, for the Tigers (13-1), where they will face the top-ranked Crimson Tide on Jan. 9. The teams that started the season ranked Nos. 1 and 2 will most certainly end it that way, too.

"If you're going to be the best, you've got to beat'em," Swinney said.

In what figures to be Watson's final college game, he will try to lead Clemson to its first national title since 1981. The junior and Heisman Trophy runner-up passed for 259 yards and ran for 57 against the Buckeyes (11-2), who could not keep Clemson's big and quick defensive line out of their backfield.

Redshirt freshman Clelin Ferrell had a sack among his three tackles for loss and Clemson allowed only 215 yards and nine first downs.

"We definitely expected to come out here and dominate because we grinded, but shoot! A shutout?" Ferrell said. "I don't think anybody expected that."

"I'm not used to it. We're not used it. It's not going to happen again," Meyer said.

Watson made it 24-0 with 2:06 left in the third quarter when he faked a pitch, cut through a hole and into the end zone from 7 yards out. He hopped through the back of the end zone and did what he called a "little LeBron thing" in front of the Ohio State section, a bit of a shoutout to his idol and Buckeyes fan LeBron James.

The rest was a formality.

Much the way Alabama's defense suffocated Washington in the day's first semifinal, Clemson gave Ohio State no options. The Buckeyes came in averaging 258 yards rushing per game and finished with 88. J.T. Barrett threw for 127 yards and was intercepted twice.

The sellout crowd of 71,279 had far more Ohio State scarlet than Clemson orange at kickoff, but halfway through the fourth quarter Tigers fans mostly had the place to themselves.

Ohio State: In a rebuilding year with only six returning starters, the Buckeyes reached the playoff. Hard to call that a disappointment, but Ohio State's issues on the offensive line and limitations in the passing game were badly exposed by a Clemson defensive line that features a bunch of future NFL players. Expect some Penn State fans to again start asking why Ohio State was picked for the playoff instead of the Big Ten champion Nittany Lions, who beat the Buckeyes in October.

Clemson: The Tigers seemed to spend much of the season trying to explain why they were not running roughshod over opponents. Expectations were so high after last season ended with a stinging 45-40 loss in a classic national championship game against Alabama.

There were close calls for Clemson early in the season against Auburn and Troy and they needed some luck to beat North Carolina State in overtime. Watson was throwing more picks and an offense that welcomed back star receiver Mike Williams was not quite the unstoppable juggernaut many expected.

But the best Clemson was the Clemson that showed Saturday. And that Clemson has always been the team best equipped to beat Alabama.

"If we play to the Clemson standard and play at a high level and focused and prepared and having a great mind-set and mentality, we can beat anybody in the country," linebacker Ben Boulware said.

Ohio State: The immediate concern for the Buckeyes is figuring out which underclassmen will jump to the NFL. The most notable players who have decisions to make in the next two weeks are: Barrett, who will be a fifth-year senior next season; H-back Curtis Samuel; linebacker Raekwon McMillan and defensive backs Malik Hooker and Gareon Conley.

"I didn't really give it that much though, but it will be really hard for me to walk away when we just lost 31-0," Barrett said.

Clemson: Watson put on an all-time performance with 478 total yards against Alabama last season. This Tide defense is even better, but Clemson brings something new to the fight in Williams, who missed most of last season because of an injury. The 6-foot-3, 225-pound junior had six catches for 96 yards against Ohio State.