Best of 2016 Music City Bowl: No. 24 Nebraska can't keep up with Tennessee 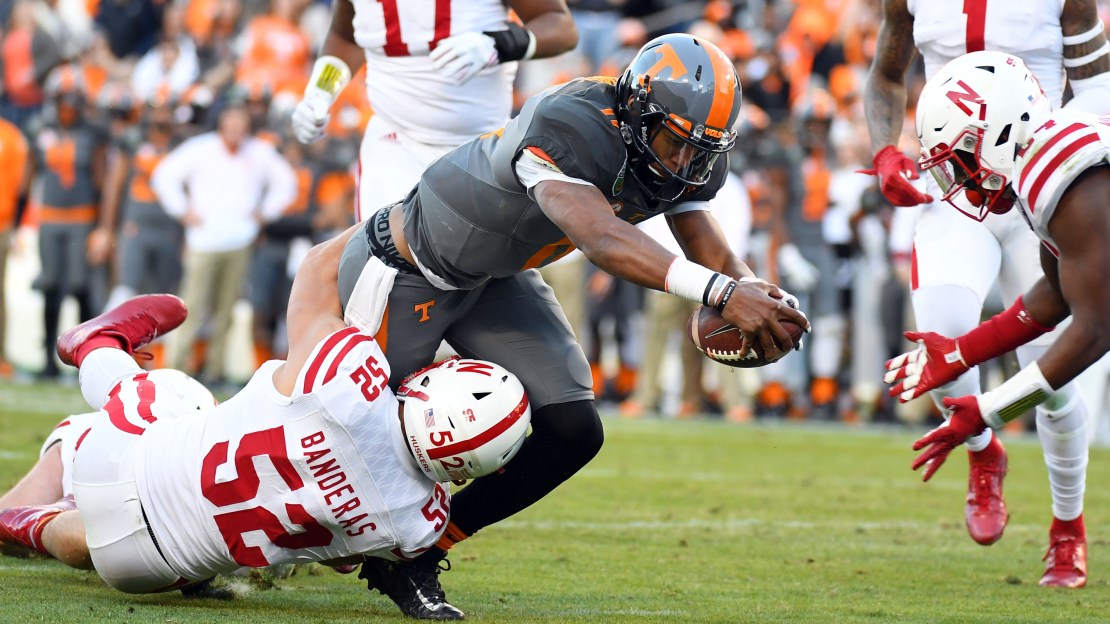 No. 24 Nebraska fell behind 14-0 and never was able to catch unranked Tennessee, losing 38-24 in the Music City Bowl.

The Vols needed this win badly after a season many have described as a ?hot mess.? This shorthanded Cornhusker squad had the deck stacked against it the moment it got off the bus in Nashville.

The Huskers played without star QB Tommy Armstrong, who had a hamstring injury. That thrust former walk-on Ryker Fyfe into the starting role. The offense also was hampered not having top wideout Jordan Westerkamp, who was out with a knee injury. Stud RB Terrell Newby bowed out with injury after the first half. And the defense was without star safety Nathan Gerry, who was academically ineligible.

BEST OF THE MUSIC CITY BOWL

Best play: Ryker Fyfe?s 38-yard TD pass to Brandon Reilly was a beaut, as it cut Tennessee?s lead to 14-7 late in the first half. It was one former walk-on hooking up with another. I also have to mention a fourth quarter sack for Tennessee star end Derek Barnett, his 33rd. That allowed him to pass all-time Vol great Reggie White for first on the school?s career sack list. Barnett was a nightmare all game long for Nebraska?s o-line, especially tackle Nick Gates. UT finished with four sacks and one turnover forced.

Best player: Tennessee QB Joshua Dobbs was a superstar. He led the Vols with 118 yards rushing with three TDs. And he hit 23-of-38 passes for 291 yards with a TD. What a finale for the senior, who broke Peyton Manning?s school record for total offense.

Best moment: For Nebraska, it was a nine-yard TD run by QB Ryker Fyfe with 10:02 left in the game to cut Tennessee?s lead to 31-24 after the Huskers recovered a Tennessee fumble on a kickoff. That gave the Cornhuskers hope. Alas, the Volunteers quickly responded with a 59-yard TD pass to Josh Malone to gain a two-touchdown advantage again. Malone had five catches for 120 yards.

Best stat: 98, yards receiving for Husker WR Brandon Reilly on four catches with two TDs. It was a terrific way for him to end his career.

Offense: C-. The offense never really got going with Ryker Fyfe under center in place of Tommy Armstrong. And it didn?t help to have stud wideout Jordan Westerkamp out, too. As a result, the Cornhuskers had just 318 yards and never really were a legit threat to Tennessee, which came in with one of the worst statistical defenses in America. The Huskers had just 61 yards rushing, as RB Terrell Newby left the game with injury. Not good.

Defense: D-. My advice to Nebraska coaches - don?t watch the film. Not a sterling effort by this unit. The big issue: tackling. Or, the lack thereof. Time and again, the Cornhuskers were sloppy in their tackling technique. And on other occasions, there seemed to be a lack of, shall we say, ?gusto? and ?want-to.? As a result, the Volunteers ripped off many big plays en route to notching 521 yards.

Special teams: B. Nothing great, nothing bad. A non-factor.

A bad finish to a 2016 season that began with such promise. The Huskers were riding high coming off a 27-14 win vs. Purdue on Oct. 22, sporting a 7-0 mark and No. 7 ranking. But Nebraska lost its next two games to begin a horrid 2-4 finish to the season. The last two losses were dispiriting, as Nebraska laid an egg in a 40-10 season-ending loss at Iowa despite having the West Division title on the line. And now, this loss to Tennessee. Yes, Nebraska has a sparkly 9-4 mark, but there were no impressive wins. The one victory vs. a ranked team even was tainted when you consider the Ducks-No. 22 when they lost in Lincoln in September–finished 4-8 and fired their coach. Contrast that to the finish in 2015, when the Huskers went 3-1 in their last four with a strong bowl win vs. UCLA to finish 6-7.

A look toward 2017: Year One of the Mike Riley era was bumpy, as the Cornhuskers went 6-7. But Year Two was largely a success, as Nebraska has rebounded to go 9-4 and tie for second in the Big Ten West. And the program should just keep getting better in 2017. But the offense will look different with QB Tommy Armstrong gone. The Huskers have two promising QBs who will battle for the job: Patrick O?Brien and Tulane transfer Tanner Lee. Each has a pro-style skill set more suited to what Riley wants in a signal-caller. Keep an eye on Tre Bryant to perhaps lead the charge to the No. 1 back spot with Terrell Newby gone. The o-line will be a veteran corps but must get better. And the wideouts will lose Jordan Westerkamp and Brandon Reilly. The secondary should be one of the best in the Big Ten even without S Nathan Gerry, but the front seven will lose the likes of LBs Josh Banderas and Michael Rose-Ivey, along with T Kevin Maurice. The line must improve.

Add it all up, and Nebraska should be a big-time factor in the West next season as the program searches for its first conference title since 1999.