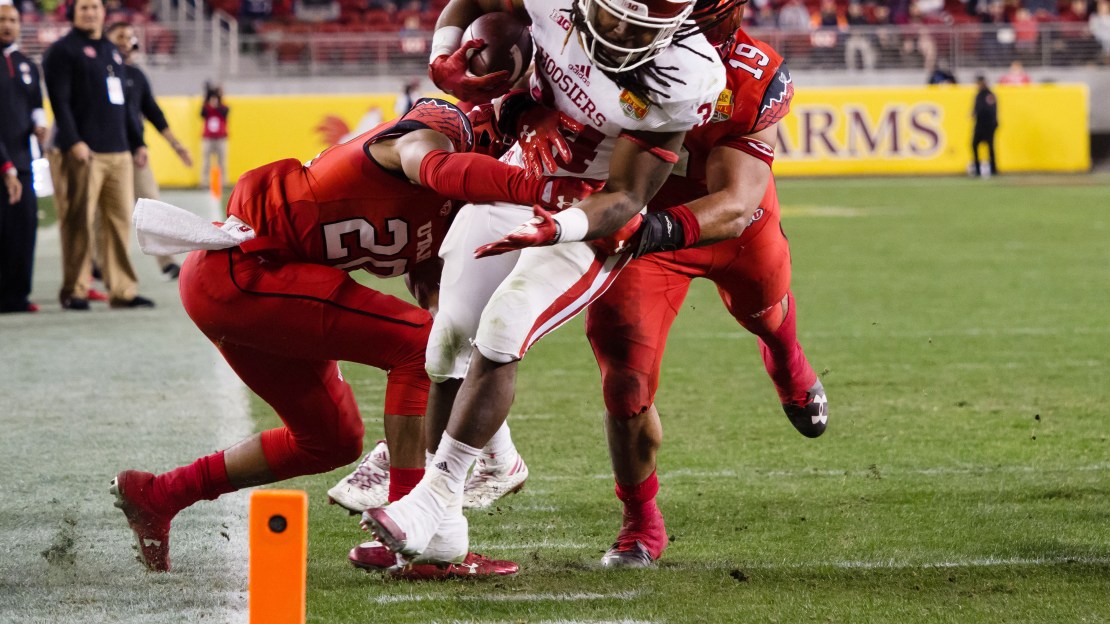 Indiana was in back-to-back bowls for the first time since 1990-91. And the Hoosiers hadn?t won a bowl since taking down Baylor in the 1991 Copper Bowl, the longest drought between postseason wins among all ?Power Five? conferences.

Oh, and IU hadn?t had a winning season since going 7-6 in 2007. Well, all of that dubious history continues, as Indiana lost a heartbreaker, 26-24, to Utah in the Foster Farms Bowl. The Utes have won 14 of their last 15 bowls, and Ute head coach Kyle Whittingham is 10-1 in bowls as Utah boss. For IU, the rally cry once again is "wait 'til next year."

Best play: Facing third-and-seven with the Utes tailing, 24-23, star Utah RB Joe Williams ripped off a 31-yard run to the Indiana 10-yard line with 2:11 left in the game. Andy Phillips came on to nail a 27-yard field goal to give the Utes a 26-24 lead. Phillips was four-of-four on field goals on the night. Utah subsequently snuffed out IU?s last-ditch drive to win the game.

Best player: Utah RB Joe Williams was a man among boys, running 26 times for a Foster Farms Bowl record 222 yards with a TD. And 161 of those yards came in the second half. Williams spearheaded a Utah rushing attack that had 256 yards. That helped Utah win the time of possession, 35:23 to 24:37.

Best moment: With 1:24 to go, Utah kicker Andy Phillips drilled what proved to be a game-winning 27-yard field goal to give Utah a 26-24 lead. That capped a 10-play, 68-yard drive for the Utes. Phillips nailed all four of his field-goal attempts: 30, 48, 41 and 27. His 48-yarder in the third quarter had a lot of ?English? on it, as the ball twisted back inside the uprights.

.@Utah_Football is back on top late in the 4th! ? #FFBOWL https://t.co/ySh7osvlOL

Best stat: 4, as in turnovers for Utah. But Indiana didn?t make the Utes pay enough for their miscues. And the Hoosiers had three turnovers themselves, including a killer Devine Redding lost fumble inside the five-yard line of Utah.

Offense: C. Indiana?s offense failed to find a consistent rhythm. Its first TD was gift-wrapped, as Utah lost a fumble on the opening kickoff to set up a three-play,12-yard TD drive for Indiana. QB Richard Lagow hit just 14-of-39 passes for 188 yards with a TD and interception. He often was off target, and was hurt by myriad drops. And the vaunted Hoosier ground game never really gained traction with 117 yards. And it hurt that Devine Redding lost a fumble inside the Utah five-yard line in the first half. Add it all up, and IU was outgained 470-341.

Defense: B. This unit was strong most of the night. Yes, Utah ran for 256 yards, led by Joe Williams? 222. And the Utes had 470 yards overall. But time and again, IU came up with some big stops and generated four turnovers, keeping the offense in the game much of the night.

Special teams: D. It hasn?t been a good year for kicker Griffin Oakes, who entered the game having hit just 15-of-24 field-goal attempts (62.5 percent). He hit a 24-yard field goal in the first half but missed a 40-yarder that would have given the Hoosiers a 27-23 lead with 5:34 to play. If you recall, Griffin also missed a potential game-tying 38-yard field goal in overtime in a loss to Duke in last season?s Pinstripe Bowl.

Like last year?s 44-41 OT loss to Duke in the Pinstripe Bowl, this one will be difficult for IU to swallow, as the Hoosiers looked poised to claim victory. With Indiana rallying from 10 points down and clinging to a 24-23 lead in the fourth quarter, Utah was driving behind the running of Joe Williams. With the Utes pressing into IU territory, Williams lost a fumble. It was Utah?s fourth turnover of the game. The Hoosiers took over and could have padded their lead. Alas, Griffin Oakes missed a 40-yard field goal. That gave Utah life, as the Utes proceeded to drive to the winning field goal.

A look toward 2017: There is one big unknown-head coach Tom Allen, who never has been a head coach. Will IU lose any mojo without Kevin Wilson and his offensive prowess? The good news: There will be lots of talent back on both sides of the ball. The offense will benefit from having QB Richard Lagow and RB Devine Redding back, along with WR Nick Westbrook and the makings of a good line led by young stud T Coy Cronk. The back seven on defense loses no key pieces and will be led by LB Tegray Scales, LB Marcus Oliver and CB Rashard Fant. In fact, the only key player gone from the defense is NT Ralph Green III from a unit that showed great improvement from 2015 to 2016 with Allen as DC. This could be an even saltier defense moving forward.

Up next for IU: An Aug. 31 season opener vs. Ohio State in Bloomington.