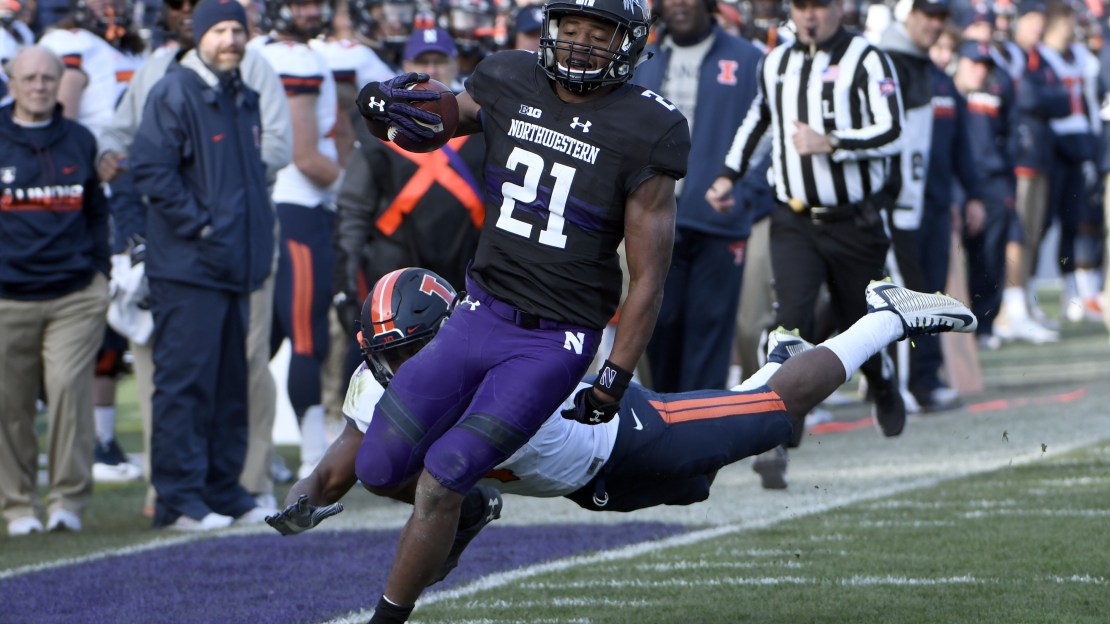 (AP) Justin Jackson ran for 226 yards and three touchdowns and powered Northwestern to only its third bowl victory, 31-24 over No. 22 Pittsburgh in the Pinstripe Bowl at Yankee Stadium on Wednesday night.

Jackson was the straw that stirred Northwestern's offense in the Bronx and helped etch this performance alongside the 1948 Rose Bowl and 2012 Gator Bowl victories in the program's oft-futile history.

He had TD runs of 8 and 16 yards in the second quarter, then went deep on a 40-yard burst in the third that left one defender face down on the turf following a fantastic fake and gave the Wildcats (7-6) a 21-17 lead.

Rallying without injured quarterback Nathan Peterman and running back James Conner, Pitt yanked the lead away in the fourth on a short TD pass before it collapsed the rest of the quarter.

The Wildcats turned a fourth-and-1 into a 21-yard play-action TD pass that made it 28-24 and a hit late field goal for a seven-point lead.

The Panthers, who had wins over No. 2 Clemson and Big Ten champion Penn State, still had time to spoil Northwestern's upset bid with a late drive for the tying score. Scott Orndoff failed to hang on to backup quarterback Ben DiNucci's strike in the end zone on third down. DiNucci had his fourth-down pass picked off by Jared McGee, who helped bust up the previous pass play, to clinch the win for the Wildcats.

Jackson, who led the Big Ten with 1,300 yards rushing and became the first Wildcat to rush for 1,000-plus yards in three straight seasons, needed only a 44 on the back of the jersey to become Northwestern's Mr. December. He stiff-armed one defender, then bowled over a second for a 16-yard score that helped Northwestern take a 14-10 lead into halftime.

Peterman, who threw for 253 yards, gave Pitt a 17-14 lead on a 5-yard scamper in the third. Peterman's solid outing ended late in the quarter when he was sandwiched between two defenders and his head slammed the turf.

DiNucci was picked on Pitt's final drive with 30 seconds left in the game and the Wildcats stormed the field in celebration.

Conner, who capped a triumphant return from Hodgkin lymphoma, suffered a brutal helmet-to-helmet blow to the head late in the first half and did not return. Unlike some draft prospects, Conner played the bowl game even though he decided to skip his senior season and declare for the NFL draft. The 6-foot-2, 240-pound Conner, who had 1,060 yards rushing and 20 total touchdowns entering the game, was far from a sure-fire early NFL pick.

Conner was stuffed when he tried to go over the top on a failed fourth-down try in the first quarter.

Northwestern can only hope Jackson's latest breakout game in the national spotlight will propel the program to great heights in the loaded Big Ten.

Pitt has to replace Conner in the backfield and find a new offensive coordinator. Pitt offensive coordinator Matt Canada called the shots for the final time before packing up for the same position at LSU.
– See more at: http://bigtennetwork.stats.com/cfb/recap.asp?g=201612280032&home=32&vis=12#sthash.9hwdlKMM.dpuf