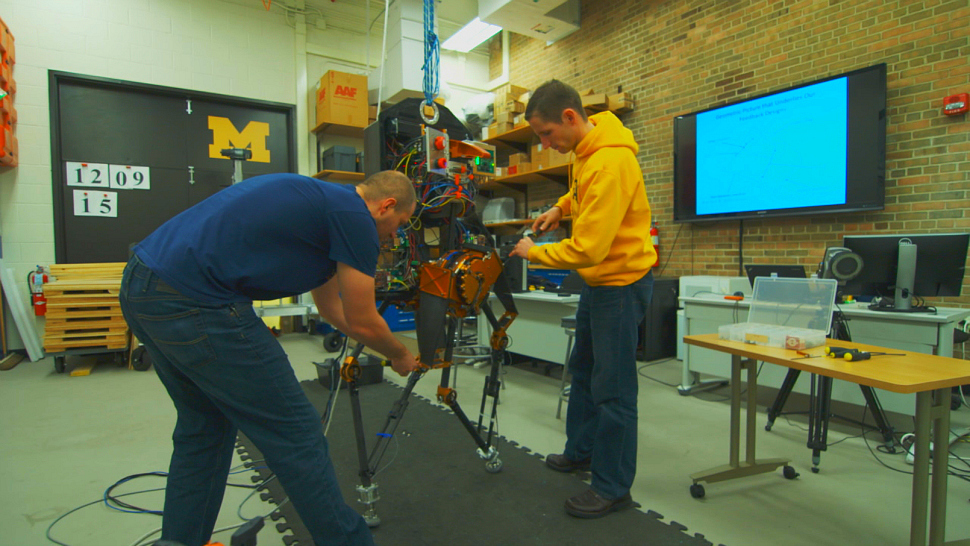 When the University of Michigan was first chartered it was called The Catholepistemiad. This invented word (a mashup of Greek and Latin) was meant to suggest founding father Justice Augustus B. Woodward's desire to create an institution that would classify and expand upon all human knowledge (encathol epistemia.)

While the name was eventually dropped in favor of one more universally recognized, the University of Michigan continues to pursue such lofty goals. From perfecting bipedal bots to preserving the prehistoric past, Michigan is home to cutting-edge research in multiple fields.

Join us as we look back on the University of Michigan's 2016 LiveBIG vignettes.

Grizzle and a team of engineers at Michigan recently brought us much closer to realizing that dream when they developed MARLO, a revolutionary bi-pedal robot. Though MARLO can't climb mountains or skateboard on a halfpipe, the robot can do something unprecedented: put one "foot" in front of the other, then do it again and again.

It was hard work getting MARLO to walk, and when the team finally did it, they celebrated in much the same way that proud parents might for their child's first steps.

"The long-term goal is to get people into a device that is lightweight, waterproof, that functions easily the first time they put it on, that's intuitive to control and enables them to get back to all of the tasks that they want to be doing and that they did before their amputation."

The car gradually moves forward, then picks up a bit of speed before turning left onto a gravel road. It slows down a bit as it passes over a railroad crossing, then makes a few more turns and lane changes as it maneuvers its way into downtown.

All of a sudden, a pedestrian darts out into the street from between two parked automobiles. The car brakes hard and avoids hitting the person, and after a few moments, each continues on their merry way, neither worse for wear.

This could be a scene from Anytown, USA, but it's not. This is the University of Michigan's Mcity. And the driver? It's a computer.

It was autumn on a farm a few miles outside of Ann Arbor, Mich. Jim Bristle was getting ready to harvest his crop of soybeans and field corn, but first he needed to take care of a drainage problem in one of his fields. Dig a hole, drop in a cistern, lay some drainage tile and pump the water out - simple enough.

Except it wasn't to be so simple. While digging, the farmer struck something he'd never seen before.

"He found bones, big bones," said Dr. Daniel Fisher, director of the Museum of Paleontology at the University of Michigan. "These were not cow or horse, and immediately he and his friends went online, began to realize that they probably had a mastodon or a mammoth, and called the university."