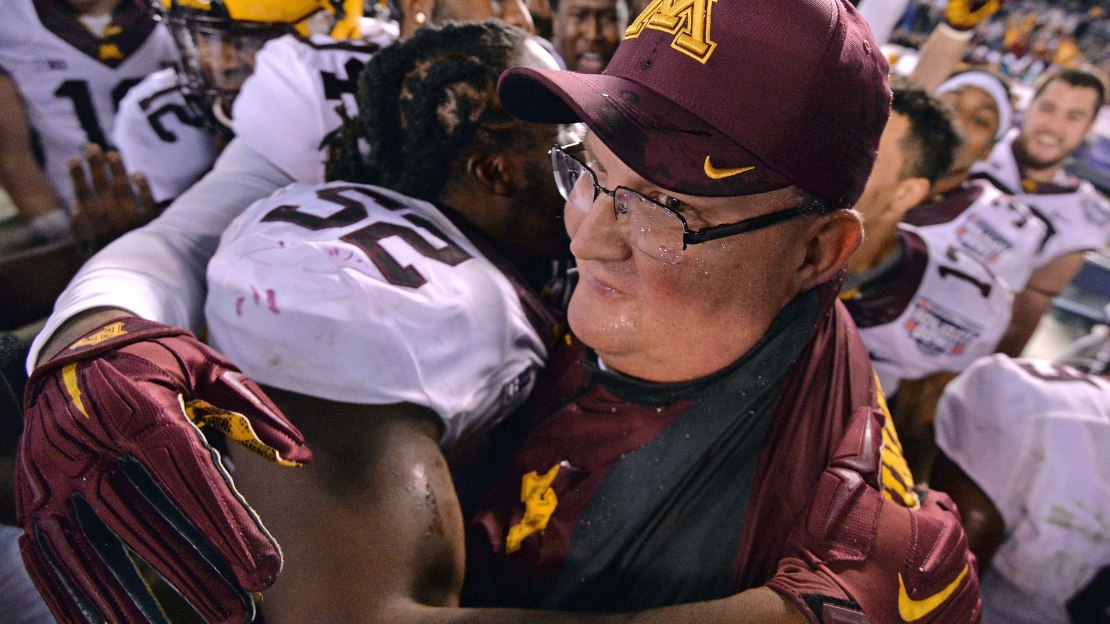 No team entered the bowl season amid the tumult that enveloped Minnesota, which had to diffuse a player boycott that threatened the Gophers? participation in this game. Things got smoothed out, and the Golden Gophers proceeded to post a big 17-12 upset of Washington State to finish 9-4.

Few could have envisioned this. What validation for Tracy Claeys and this program, which acquitted itself well playing so shorthanded-especially in a secondary that got a big effort from freshman corner Coney Durr–vs. a Washington State offense that was No. 1 in the Pac-12 in passing (370.8 ypg).

BEST OF THE HOLIDAY BOWL

Best play: Facing a third-and-8 from the Wazzu 13-yard line, Mitch Leidner dropped to pass and chucked the ball into triple coverage into the end zone. It looked like the Cougs were going to intercept the pass, but the WSU defender mistimed his jump and only deflected the pass into the air. That allowed Gopher RB Shannon Brooks to race under the batted ball to score a TD. That gave Minnesota its first lead of the game at 10-6 with 3:23 left in the third quarter.

Best player: QB Mitch Leidner hasn?t always been ?pretty,? but he did a good job tonight. After hitting just 2-of-9 passes for 26 yards in the first half, the senior had a strong second half and finished with 11-of-20 passing for 129 yards with a TD and no picks. It was a nice way to end his career.

Best moment: Clinging to a 10-6 lead late in the fourth quarter, Minnesota needed to turn back Washington State. On a fourth-and-six from the Cougar 45, Minnesota?s Adekunle Ayinde picked off a pass from a distressed Luke Falk, who hit 30-of-51 passes for 264 yards with a TD and pick. Then Rodney Smith subsequently scored a TD on a nine-yard TD run with 2:06 left to ice the game.

Best stat: 59, completion percentage for Washington State QB Luke Falk (30-of-51), 12 percent below his season average, going up against a revamped secondary due to suspension.

Offense: B-. The Gophers did just enough on offense to grind out the win, notching 280 yards. Minnesota excelled on the ground with 151 yards (3.8 pc) to Washington State?s 39 (1.7 pc). That helped the Gophers overcome 10 penalties, including an FBS-leading eighth targeting call. Duke McGhee got whistled for targeting, his third of the season.

Defense: A. Minnesota was minus four key contributors in the secondary, the result of 10 players being suspended that were at the heart of the boycott. No matter. Gopher defensive coordinator Jay Sawvel did a standout job coaching up his young crew vs. an explosive Washington State offense that was No. 2 in the nation in passing and No. 14 in scoring (40.3 ppg). Wazzu had no big plays and could sustain little vs. Minnesota.

Special teams: A. Minnesota got a nice effort from punter Ryan Santoso, who hit seven punts for 307 yards (43.9 avg) with four inside the 20. And Emmit Carpenter hit his only field-goal attempt (43 yards).

This was a good Washington State team that began the year 7-0 in the Pac-12 (a first in school annals) and at one point won eight in a row and was in the thick of the North Division before slipping late in the season. And Minnesota controlled the Cougars from start to finish, suffocating the offense of Mike Leach.

A look toward 2017: Minnesota has some building blocks, but questions loom. Will there be any fallout from the player boycott? The offense will have a new QB with Mitch Leidner gone. The program needs more from this position. The RB duo of Rodney Smith and Shannon Brooks returns to work behind what will be a veteran line that loses just one key man: T Jonah Pirsig. More questions loom on defense, as the secondary will be reworked. And LBs Nick Rallis and Jack Lynn will be gone along with DT Scott Ekpe and DE Hendrick Ekpe. Still, the defense has building blocks in LB Jonathan Celestin and T Steven Richardson. And Minnesota will have back Emmit Carpenter, the Big Ten?s best kicker. There is lots of talent back for this program that still is looking for a breakthrough.