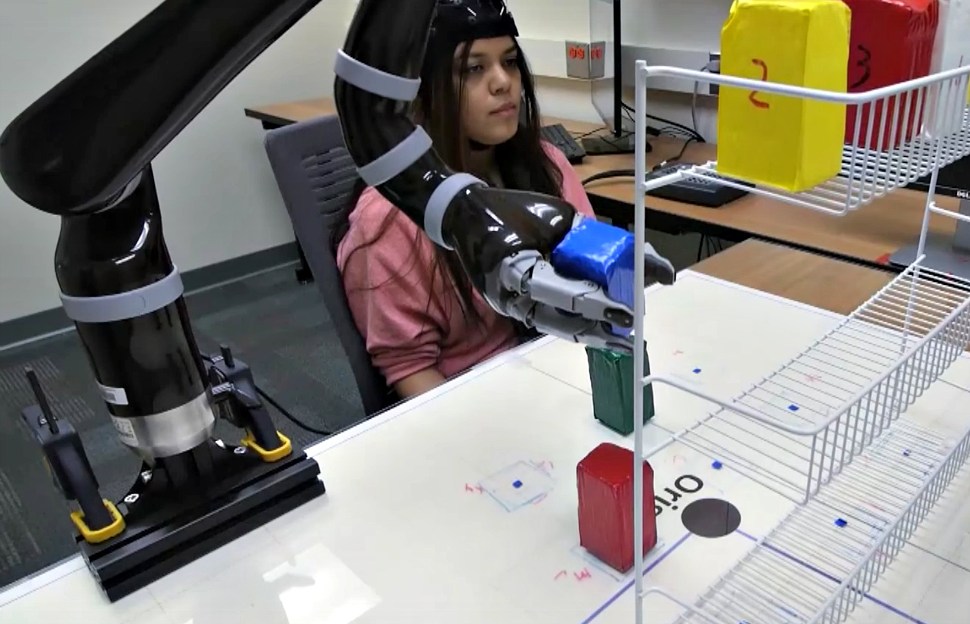 For the first time in the field of brain-control interfaces, researchers at the University of Minnesota have demonstrated the ability to operate an external robotic arm just by thinking about it – all without the need for a brain implant.

To put that it in the simplest terms possible, we now know how to control robots using only our minds.

But more importantly for the future of science, technology and humanity, this development is a huge advance in the field of biomedical engineering, an area of significance for Minnesota and other Big Ten schools.

This new work was headed up by Dr. Bin He with results recently published in the journal Scientific Reports.

Wearing a cap that fits over the head, 13 subjects in the study were able to control a robotic arm with eight of them able to move objects on a table or onto shelves.

According to a recent release from the University of Minnesota:

The researchers said the brain-computer interface technology works due to the geography of the motor cortex-the area of the cerebrum that governs movement. When humans move, or think about a movement, neurons in the motor cortex produce tiny electric currents. Thinking about a different movement activates a new assortment of neurons, a phenomenon confirmed by cross-validation using functional MRI in He's previous study. Sorting out these assortments using advanced signal processing laid the groundwork for the brain-computer interface used by the University of Minnesota researchers, He said.

Over the past few years, Dr. He and others at the Institute of Engineering in Medicine at the University of Minnesota have done pioneering work on using electroencephalographic-based brain control interfaces. In 2013, they created a process similar to their work with a robotic arm that would allow people to remotely control a drone.

Earlier this year, Dr. He was given the 2017 IEEE Biomedical Engineering Award for "outstanding contributions to to biomedical engineering."