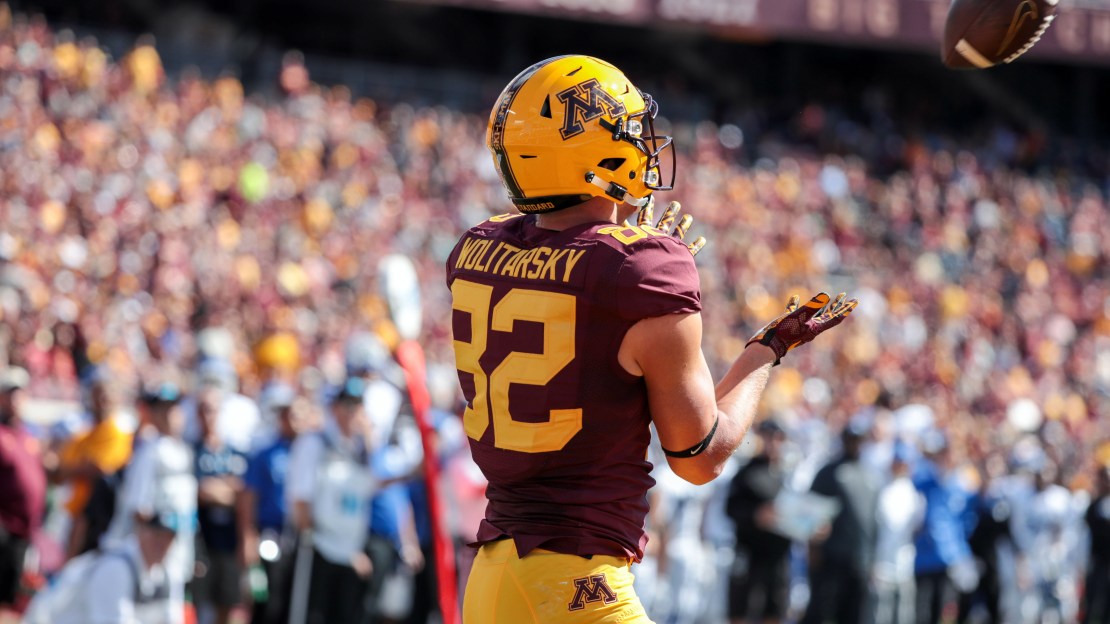 Here is part of the players? statement released today, per the Minneapolis Star Tribune:

?As a team, we understand that what has occurred these past few days, and playing football for the University of Minnesota, is larger than just us. ?

?We now ask that you, the members of the media, our fans, and the general public hold all of us accountable for ensuring that our teammates are treated fairly, along with any and all victims of sexual assault. We also ask that the public dialogue related to the apparent lack of due process in a university system is openly discussed and evaluated.

?As football players, we know that we represent this University and this state and that we are held to a higher standard. We want to express our deepest gratitude to our coaching staff and so many others for their support during this difficult time, and we hope that our fans and community understand why we took the actions that we did.

?Our thoughts and prayers are for the well-being of the woman involved in the original incident, and for our 10 teammates to ensure that they are treated fairly. We look forward to representing the University of Minnesota and the state of Minnesota in the Holiday Bowl in a way that makes all of you proud.?

The resolution means Minnesota will play Washington State in the Holiday Bowl on Dec. 27th in the San Diego. The Gophers avoid becoming the first school ever to miss a bowl over a player boycott. Now, the ugly headlines can end. And the healing can begin.

This was unwelcomed turmoil for an athletic program that has been in embroiled in some other unsavory headlines over the past year. And was unwelcomed turmoil for a football program that was gaining traction coming off an 8-4 season and headed to a school record-tying fifth bowl in a row under Tracy Claeys, in his first season as head coach after Jerry Kill stepped down.

The player protest began on Thursday, when they announced they were boycotting all football activities.

?The boycott will remain in effect until due process is followed and the suspensions for all 10 players involved are lifted,? receiver Drew Wolitarsky said.

And Wolitarsky said that the players also wanted an apology from Kaler and Coyle, saying they ?demand that these leaders are held accountable for their actions.?

When asked if the he and teammates were concerned about losing their scholarships, Wolitarsky replied: ?We?re all in this together. What are they going to do, pull 120 guys off the team? They won?t have a team if that?s the case.?

Friday, Kaler issued a strongly worded statement that showed the school was unlikely to budge on its stance, stating ?Minnesota will not change our values or our code of conduct for the sake of a bowl.?

The standoff between the players and school grew so dire on Friday that Gov. Mark Dayton got involved, demanding the parties ?defuse? the situation and meet that night because the dispute was ?a bad black eye? for the school.

?It would be very, very serious, and I hope the players recognize that, for their sake and the sake of the program,? Dayton said. ?Once again, it?s how we make national news. We have so many successes in Minnesota that don?t get national attention and these are the things that do ? it?s a bad black eye and it will get worse if it does not quickly resolve.?

Alas, that summit-which according to reports included Kaler, Coyle and at least two school regents–proved fruitless.

While disaster was avoided and the Holiday Bowl will go on as planned between Minnesota and Washington State, this is more evidence of a new era for student-athletes. They no doubt feel more emboldened and more empowered. The rise of their voices began with a unionization effort by Northwestern. And the Ed O?Bannon court case was fueled by player rage over a lack of compensation for their likeness, among other things. Without events like this, perhaps the Minnesota players wouldn?t have had the willingness and gumption to move forward with their boycott.

What?s next in the world of college athletes? Will boycotts become more commonplace? What if, say, a school involved in the College Football Playoff did this? Or a team in the Final Four? Talk about leverage.

Buckle up, America. This is far from over.

This is the second major school to threaten a boycott in the last two years. Missouri players staged their own in 2015, upset over how the school had been responding to racial incidents on campus. The players demanded the resignation of the school president; if it didn?t happen, the players would boycott a regular-season game vs. BYU. The Missouri administrators relented. The school president and chancellor both stepped down, and the game was played.

The Minnesota suspensions trace their roots to a sexual assault allegation made by a Minnesota student that happened at the start of the 2016 season following the Gophers? season-opening win vs. Oregon State. The school subsequently suspended four players - Ray Buford, KiAnte Hardin, Dior Johnson and Tamarion Johnson - for an unspecified violation of team rules. They missed three games while police investigated the early September incident. The players were reinstated when Hennepin County declined to press charges. No arrests were made in the alleged incident.

But as required by federal law, the university conducted its own investigation through the office of EOAA. Universities have a process of investigating sexual assaults that is different than the legal system of investigation. According to the Minneapolis Star Tribune, it?s a protocol designed to protect students. This is where the presumed disconnect is for players: there were no arrests or criminal charges vs. the players. But the school?s EOAA investigation still concluded the players are guilty and the suspensions are merited.

It?s important to note that the university didn?t face the same burden as prosecution to determine innocence or guilt. It just had to determine whether the ?preponderance of evidence? indicated it was, according to university policy, ?more than likely than not? that an assault took place.