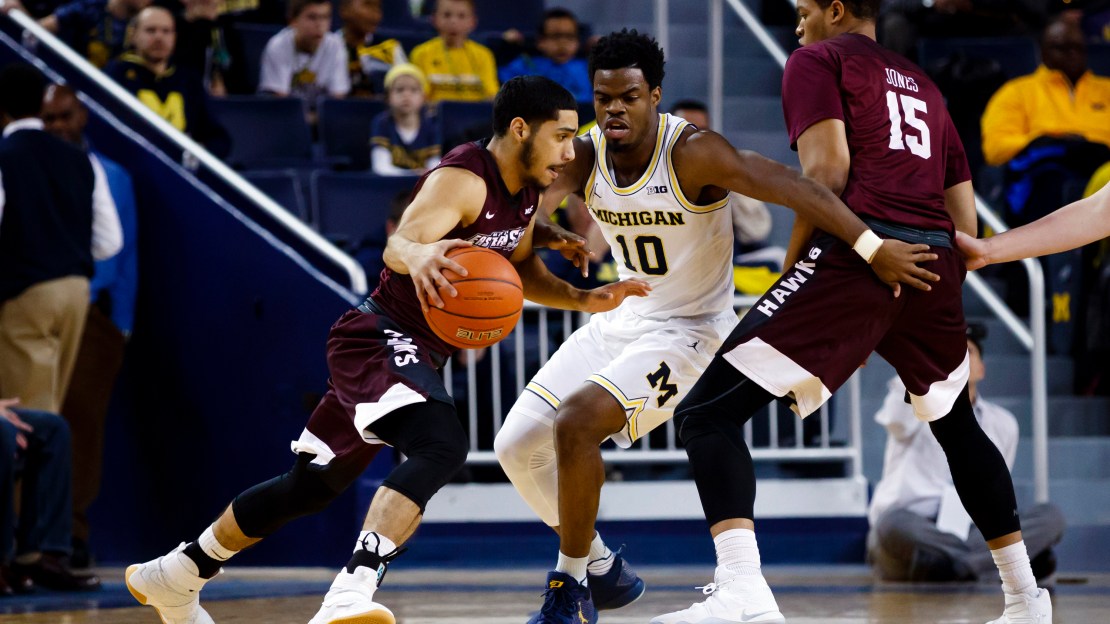 (AP) Muhammad-Ali Abdur-Rahkman was preparing to take his usual spot in the starting lineup, only to be kept out by a bookkeeping error.

"I've got to ask how that happened," Michigan coach John Beilein said. "The scout coach puts in the book, and there's never been an issue with that."

The lineup mistake was about the only error by the Wolverines, who rolled to a 98-49 win over Maryland-Eastern Shore on Saturday. Derrick Walton scored 16 of his 21 points in the first half. Abdur-Rahkman had seven points and a career-high 10 assists.

It was the first time all season that Abdur-Rahkman was out of the starting lineup, and Duncan Robinson was there in his place.

"I guess they mixed it up and put Duncan," Abdur-Rahkman said. "I thought it was kind of funny."

Abdur-Rahkman was subbed in to replace Robinson after 46 seconds.

The Wolverines eventually fell off that torrid pace, but Michigan was still able to set a season high in scoring for the second consecutive game. The Wolverines beat Central Arkansas 97-53 on Tuesday night.

"Throughout that whole game, I kept telling the guys, `Let's go win this possession,' as if it were the game-winning possession in our conference," Maryland-Eastern Shore coach Bobby Collins said. "We didn't get the stops that I wish we would have gotten."

Michigan made its first seven shots from the field and led 19-2 after a 3-pointer by Walton. It was 49-22 at halftime.

Robinson had 17 points for the Wolverines, and D.J. Wilson added 16 – including a couple dunks early in the second half. Moe Wagner's one-handed, breakaway dunk put Michigan up 66-31.

Maryland-Eastern Shore: The Hawks were coming off a week-long break after a loss at Central Florida last Saturday, but the time off didn't lead to a good start in this game. This was the third game of a six-game stretch away from home.

Michigan: This is a much easier stretch in the Wolverines' schedule after they took on the likes of Virginia Tech, Texas and UCLA earlier. None of the Michigan players went 30 minutes Saturday, and the Wolverines left no doubt about their superiority with their fast start.

"They shot lights out," Collins said. "That's a good team. When they're hitting like that, I think they're going to beat a lot of teams."

Michigan had a season-high 28 assists on 34 baskets.

"We're a close-knit team, so you always want to hit your open friend or buddy, and you want to see them make shots," Abdur-Rahkman said. "I think that contributes to more assists."

The Michigan bench loved it when walk-on Fred Wright Jones made a 3-pointer late in the game for the first points of his career. Wright-Jones was a manager and practice player last season before Beilein had him suit up for the regular-season finale. He's played in eight games this season.

Michigan: The Wolverines will be heavily favored again Thursday night at home against Furman in their final game before the start of Big Ten play.