No. 17 Wisconsin starts slow, finishes fast in 90-70 rout of Oklahoma 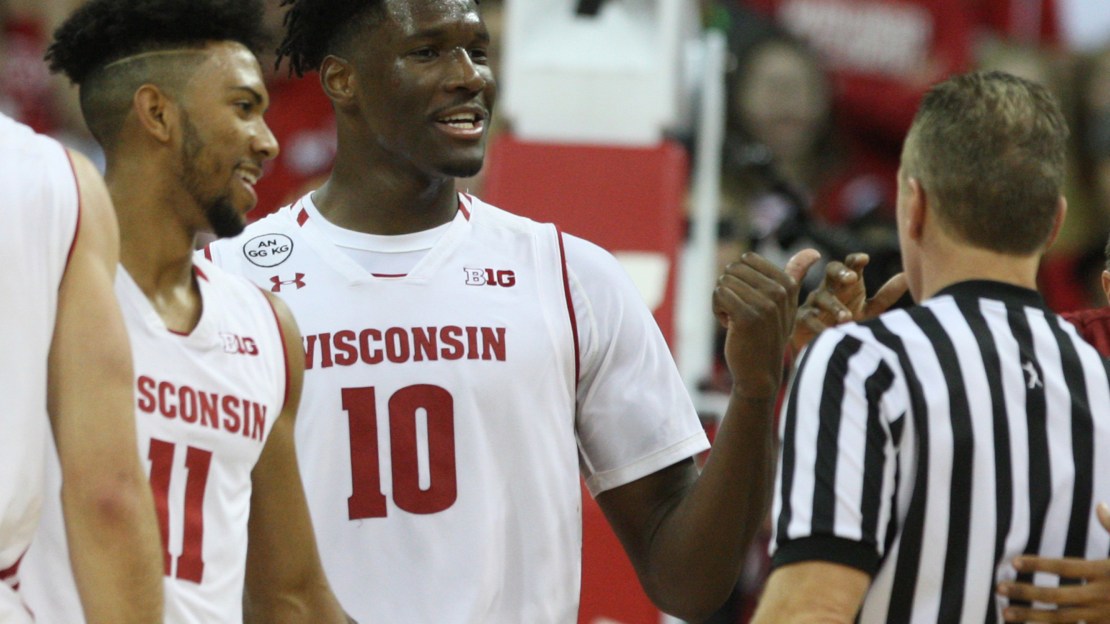 (AP) Wisconsin coach Greg Gard says what makes Nigel Hayes and the Badgers play at their best is one in the same – how far the 6-foot-8 forward is from the basket.

And with Hayes working largely from 18 feet and in, he scored a season-high 28 points Saturday as No. 17 Wisconsin shook off a slow start and blew past Oklahoma 90-70.

"The further he gets from the basket, the more the hard match-up scenarios level off or dissipate," Gard said.

Gard said what impressed him most about Hayes was he shot 13 free throws, hitting 10, and didn't turn the ball over once while dishing out six assists. Most of those assists were at the rim as the defense collapsed, opening up outside shots.

Hayes said he's just taking what the defense gives him.

"It's just a matter of me staying consistent, staying confident in myself with the work I put in, whether it's inside or outside, just going with that mindset that no one can guard me," said Hayes, who took only two 3-point attempts and made both.

The Badgers (7-2) trailed Oklahoma (5-2) the entire first half as they struggled to guard dribble handoffs that gave the Sooners momentum while attacking the rim. But once the Badgers cleaned that up and found their shooting touch, they pulled away.

Wisconsin was 4 of 13 from behind the arc in the first half, and Rashard Odomes put Oklahoma up 58-57 with a 12-footer 8 minutes into the second half. But Bronson Koenig of the Badgers answered with a 3 that started a 20-3 run to put the game away.

The Badgers connected on 8 of 14 3-point attempts in the second half, including three in their decisive run.

Oklahoma committed 16 turnovers, eight in each half. But the Sooners were able to overcome that in the first half by hitting 5 of 8 from behind the 3-point line. Those shots stopped falling in the second half as they went 1 of 6, and coach Lon Kruger said the Sooners didn't find a way to answer as Wisconsin's confidence shot up in their final run.

"Some of it was certainly our doing. Some of it was Wisconsin making a good play," Kruger said of the 20-3 run. "Those opportunities are what we have to learn from and certainly do a better job."

Oklahoma: It was the first true road game and first against a ranked opponent for a squad that has 11 underclassmen on the roster. But the Sooners didn't come out intimidated and built an eight-point lead in the first half. Still, they contributed to that decisive Wisconsin run with six turnovers over the 5-minute run. They haven't beaten a ranked non-conference team in a true road game since 1989.

Wisconsin: When the Badgers have an inside and outside game working together, they can put on a display. Struggling from outside in the first half, they were outscored 40-37. Hitting from the 3-point line, they outscored Oklahoma 53-30 in the second half.

Midway through the first half, the Kohl Center's firm alarm went off, triggering a recorded message there was an "abnormal condition" in the building and urging everyone to exit. The game continued with the alarm still going off, including as Hayes went to the free throw line and hit 1 of 2. The alarm eventually stopped, and the public address announcer said there was no emergency in the building.

That's consecutive wins for Wisconsin over teams from Power Five conferences, which should provide a boost to the Badgers, who dropped a spot in the poll last week after losing to North Carolina 71-56 in Hawaii.

Oklahoma: On Wednesday, the Sooners host Oral Roberts, who they have beaten 14 straight times.