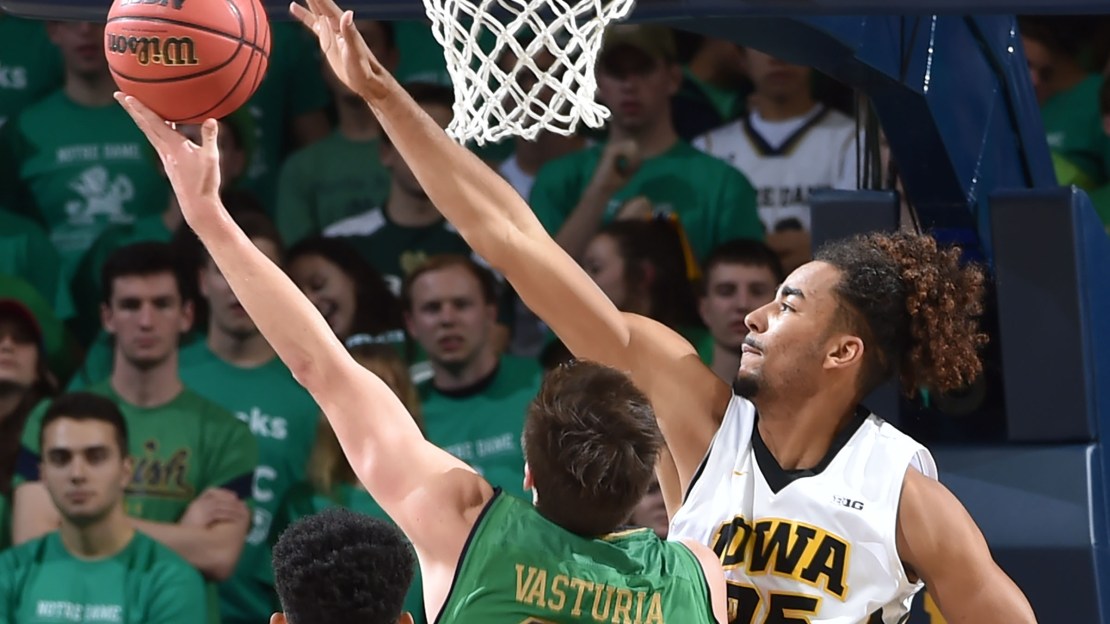 (AP) Bonzie Colson had season-high 24 points and a career-high 17 rebounds, Steve Vasturia tied a career-high with 22 points and Notre Dame overcame squandering a 15-point lead in the first half to beat Iowa 92-78 Tuesday night in the ACC/Big Ten Challenge.

Iowa (3-4) had its largest lead of the second half at 52-50 when Notre Dame hit four straight shots and Iowa missed four straight during a 10-0 run capped by Vasturia driving through the lane for a layup to give Notre Dame a 60-52 lead.

The Irish extended the lead to 79-63 on a jumper by Farrell.

Freshman Jordan Bohanon, whose previous season-high was six points, finished with a team-high 23 points. Jok, coming off a career-high 42 points against Memphis, struggled throughout, making 4 of 20 shots for 15 points.

Iowa: The Hawkeyes were without freshman forward Tyler Cook, their second-leading scorer at 13.7 points game, who underwent surgery earlier Tuesday because of a fractured his right index finger and is expected to be out about three weeks. After two straight losses the Hawkeyes tried to shake things up with three new starters but continued to struggle against Power Five opponents.

Notre Dame: The Fighting Irish, who entered the game averaging 7.5 turnovers and 18.5 assists, had four turnovers in less than six minutes, 11 in the first half. The Irish finished with 14 turnovers and just 11 assists, but won comfortably to improve to 7-0 for the third time in 17 seasons under Mike Brey. The Irish also won their first seven in 2001 and got off to their best start at 8-0 in 2010.

Iowa: The Hawkeyes return home to play Omaha and Stetson before facing rival Iowa State, which is ranked No. 19.

Notre Dame: The Irish play North Carolina A&T and Fort Wayne at home before neutral-site games against No. 2 Villanova in Newark, New Jersey, and No. 15 Purdue in Indianapolis.