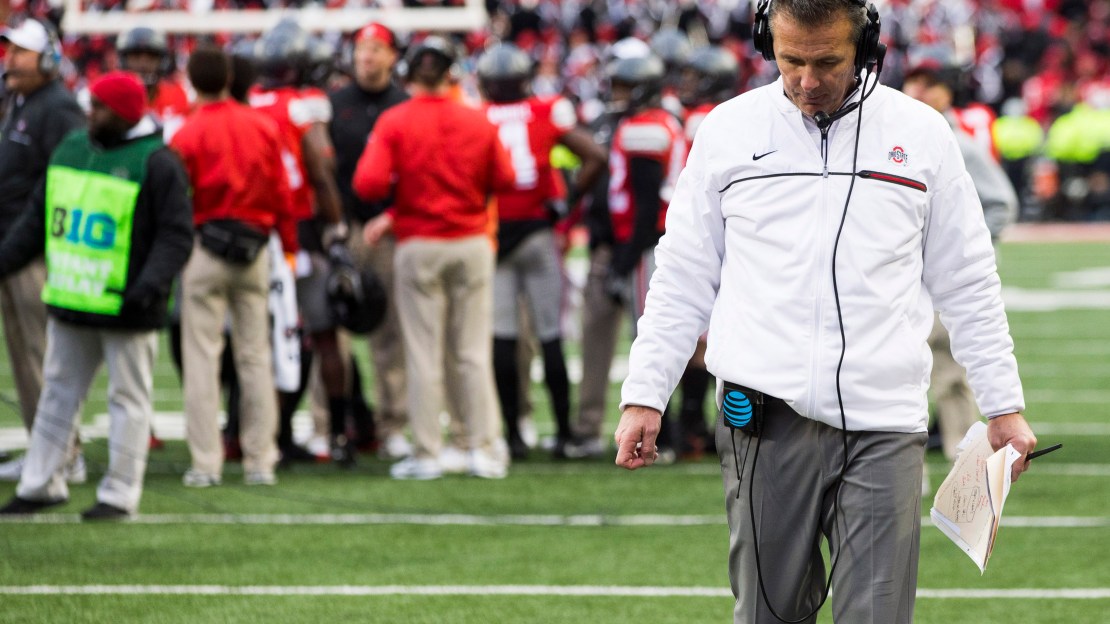 The final weekend is in the books. And Ohio State showed it is the Big Ten?s best team. But the Buckeyes won?t even be in the Big Ten title game. This day also saw Northwestern, Illinois and Indiana become bowl eligible and Penn State wrap up the East, while Michigan is left to wonder ? what if?

Biggest surprise: It was a surprise to see how easily Iowa dispatched Nebraska, taking a 40-10 decision. The Cornhuskers had a lot to play for, but it didn?t look like it. Watch full highlight.

Biggest disappointment: Nebraska. The Huskers still had West division hopes when the Friday began. But they needed to win at Iowa, plus have Minnesota upset Wisconsin. Alas, Nebraska got clobbered, 40-10, in a very disheartening effort. It didn?t help that QB Tommy Armstrong wasn?t 100 percent coming off a hamstring injury.

Play this again: ?The Game? lived up to its hype, as Ohio State and Michigan battled in overtime for the first time with the Buckeyes coming out on top, 30-27, in two OTs. The Buckeyes trailed, 17-7, in the second quarter but booted a tying field goal with a second left to force OT at 17-17. The teams traded touchdowns in the first OT. And after Michigan kicked a field goal on its possession in the second OT, Curtis Samuel scored from 15 yards out to win the game. It was OSU?s largest comeback vs. Michigan since 1987. Watch full highlight.

Never play this again: Michigan State at Penn State. Yes, the Spartans led the Nittany Lions, 12-10, at halftime. But Penn State blew out the reigning Big Ten champs by outscoring them 35-0 in the second half en route to a 45-12 victory. Watch full highlight.

Best play: Teldrick Morgan punt return TD vs. Rutgers. For the second week in a row, a Terrapin provided quite the highlight with a long, tackle-breaking touchdown. It was D.J. Moore last week, and it was Morgan this week. Seriously, check out this pretty 83-yard punt return.

Best moment: Trace McSorley consoles Saquon Barkley. The Penn State running back suffered an injury Saturday, and didn't return. While the Big Ten's top back was sitting on the trainer's table, towel over his head, McSorley came over and consoled him, a touching moment captured by ESPN cameras. For what it's worth, James Franklin would not comment on the injury in his postgame press conference.

Did you see this? Penn State fans cheer Ohio State's win. Entering Saturday's finale, Penn State needed to beat Michigan State AND have Ohio State win The Game. The Buckeyes took care of business in the noon ET time slot, and because the outcome wasn't decided until double overtime, it overlapped with the Nittany Lions' 3:30 p.m. ET kick. No problem, the fans were all over the score, and when Curtis Samuel scored the game-winning touchdown, Beaver Stadium went wild.

Offensive Player of the Week: Penn State QB Trace McSorley hit 17-of-23 passes for 376 yards and four TDs as the Nittany Lions blew away Michigan State in the second half en route to winning the Big Ten East. And let?s also mention Ohio State QB J.T. Barrett, had 249 all-purpose yards, including 125 yards on the ground.

Defensive Player of the Week: Ohio State LB Jerome Baker had 15 tackles (seven solo) with a sack, TFL and interception. And props to Maryland LB Jermaine Carter, Jr., who had 15 tackles (eight solo) with two sacks and 2.5 TFLs in limiting Rutgers to 13 points.

Special Teams Player of the Week: Wisconsin punter Anthony Lotti averaged 43 yards on seven punts with a long of 60 yards and had four downed inside the 20-yard line. Also, Michigan State?s Michael Geiger was four-of-four on field goals, providing the Spartans with their only points.

Ohio State. The Buckeyes overcame two missed chip-shot field goals and a botched fake punt to grind out a 30-26 double overtime win vs. Michigan. OSU is 13-2 vs. Michigan since 2001, as the Wolverines still haven?t won in Columbus since 2000.

Penn State. A win over Michigan State coupled with Michigan?s loss at Ohio State sends the Nittany Lions to their first Big Ten title game. This is the hottest team in the Big Ten, winners of eight in a row. The offense is rolling, notching 463 yards vs. MSU.

Wisconsin. The Badgers already had the West title wrapped up prior to the game, thanks to Nebraska?s loss on Friday at Iowa. But Wisconsin still wanted to win Paul Bunyan?s Axe and keep its playoff hopes alive. And UW did with a 31-17 win vs. Minnesota, which had just 286 yards and four turnovers.

Iowa. The Hawkeyes closed the regular season with a bang, winning three in a row-two over ranked foes–and yielding just two TDs along the way. And the offense showed life in the finale vs. Nebraska, producing three plays over 50 yards.

Northwestern. The Wildcats became bowl eligible with a 42-21 thumping of visiting Illinois to become bowl eligible. It was NU?s second win in its last three games.

Nebraska. The Cornhuskers began Friday with a shot to still win the West, but they had to win at Iowa. Alas, NU got hammered, 40-10. QB Tommy Armstrong was still battling the effects of a hamstring injury that kept him out the week before and the defense got run over for 264 yards rushing by Iowa. Nebraska was outscored 102-13 in its last two road games.

Purdue. If this isn?t rock bottom, the Boilermakers can?t be far from it. The program has now lost the Old Oaken Bucket for a fourth season in a row for the first time since 1944-47, ending the year with seven losses in succession. And the 26-24 loss ends another dreary season for a program that has gone 9-33 the last four years.

Illinois. The Fighting Illini ended Lovie Smith?s debut with three losses in a row, falling 42-21 at Northwestern. This is a young program with 28 first-time starters in 2016 entering this day. More is needed from the offense, as Wes Lunt's 19-yard TD pass to Malik Turner in the second quarter was the Illini's first TD in nine quarters.

Rutgers. Chris Ash endured a challenging debut, going 0-9 in the Big Ten after falling 31-13 at Maryland. The offense had some epic struggles down the stretch, getting shutout four times in Big Ten play.

Michigan State. A miserable season finally ends in a 3-9 heap for the Spartans, which had issues at quarterback and in the trenches all season a year after going to the playoff.

Minnesota. The Gophers still have not won in Madison since 1994 and have lost 13 in a row to Wisconsin, falling 31-17. Mitch Leidner tossed four second-half picks.

13, wins in a row for Wisconsin vs. Minnesota.

100, yards rushing for Wisconsin?s Corey Clement on 26 carries with two TDs. He has rushed for over 100 yards four games in a row.

7, pick sixes for Ohio State this season, as Malik Hooker added to the total with a 16-yard INT return for a TD.

2, 100-yard receivers for Illinois, as Malik Turner had 11 catches for 164 yards and two TDs and Justin Hardee had nine grabs for 125 yards.