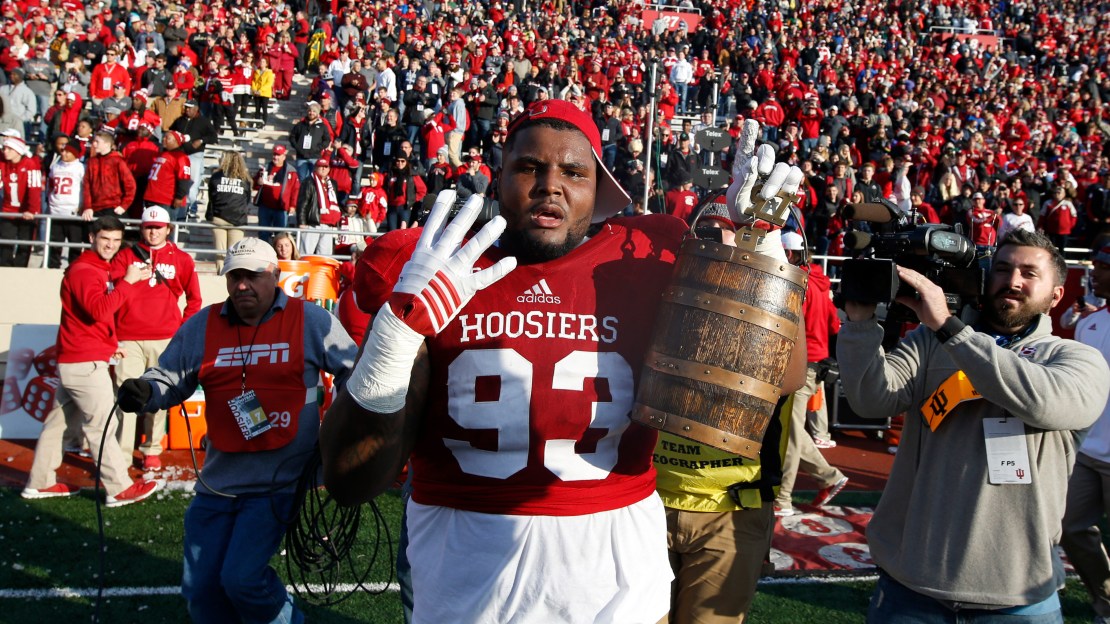 (AP) Devine Redding powered in from 1 yard out with 4:59 left Saturday to give the Indiana Hoosiers a 26-24 victory over rival Purdue.

The Hoosiers also tied a school record by winning the Old Oaken Bucket for the fourth straight year. That had only happened once previously, from 1944-47.

Purdue (3-9, 1-8) finished the season with its seventh straight loss – six of those after Gerad Parker took over as interim coach for the fired Darrell Hazell.

But the Boilermakers put themselves in position to pull the upset.

After a blocked extra left Purdue in a 17-16 halftime deficit, they opened the third quarter with a 31-yard TD pass from David Blough to DeAngelo Yancey before missing the 2-point conversion attempt.

Indiana closed to 22-20 on a 46-yard field goal early in the fourth quarter but didn't retake the lead until Redding's go-ahead score.

Purdue's first desperation attempt vanished after Jonathan Crawford picked off David Blough in the end zone on fourth-and-14 from the Hoosiers' 27-yard line. It was Crawford's second interception of the day.

The Hoosiers couldn't run out clock but burned all but 1 second taking a safety. Crawford recovered a fumble on the ensuing free kick to seal it.

Redding finished with 24 carries for 99 yards.

Blough was 24 of 45 for 225 yards with two TDs and two interceptions while Yancey finished his college career with six catches for 78 yards.

Purdue: After missing the postseason for the third straight season, the Boilermakers face some major offseason upheaval. Parker and most – or all of the coaching staff – are not expected to return. And until a new coach is in place, it's impossible to know what direction Purdue will go .

Indiana: A historic win will give the Hoosiers some extra practice time – and one more game this season.

Indiana: Will eagerly await the official bowl announcements Dec. 4 even though the Hoosiers should have some idea of where they'll be going long before that date.