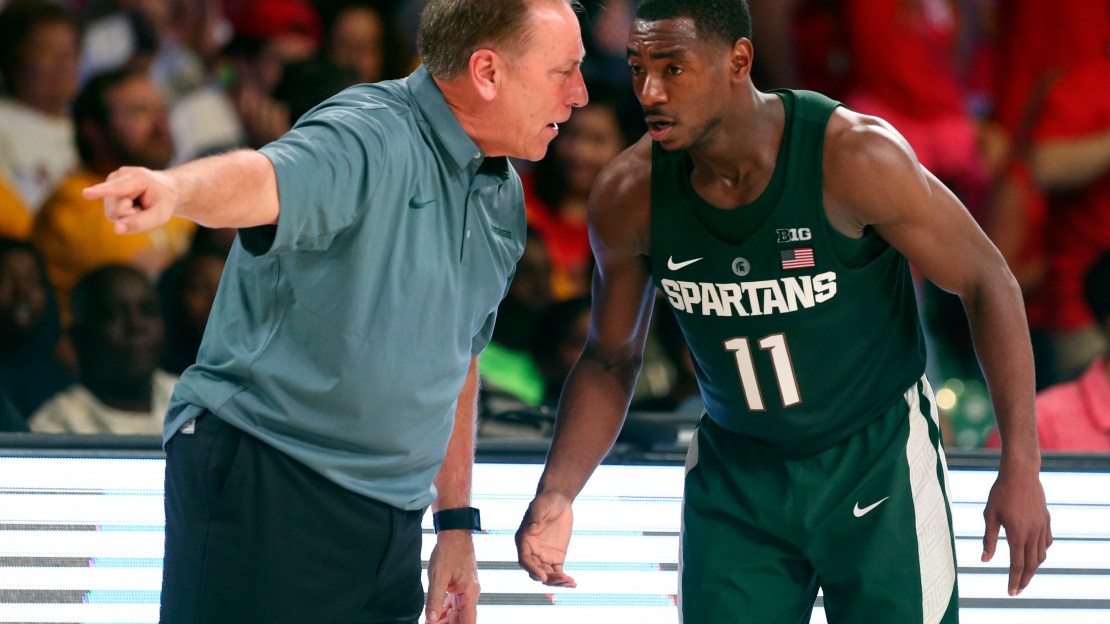 PARADISE ISLAND, Bahamas (AP) Michigan State coach Tom Izzo can see the positives and negatives all jumbled together for his 24th-ranked Spartans, from the good stretches where the ball goes inside to the bad ones when his team fires up quick 3-point attempts.

"It's still not smooth for us," the Hall of Fame coach said after Wednesday's 73-62 victory over St. John's in the Battle 4 Atlantis. "It might not be for a while."

Freshman Miles Bridges had 22 points and a season-high 15 rebounds to lead the Spartans (3-2), who used a 17-4 burst midway through the second half to pull away late and build a 67-53 lead with about 2 1/2 minutes left.

Eron Harris added 14 points for the Spartans, while Tum Tum Nairn Jr. – a native of nearby Nassau – matched his career high of 13 points in his return to the Bahamas.

Michigan State has had a bumpy start to the season, starting with a loss to Arizona on a last-second basket in the opener. The Spartans managed just 48 points in a loss to current No. 1 Kentucky and barely beat Florida Gulf Coast at home over the weekend. It's part of a tough opening month that concludes with a trip to preseason No. 1 Duke in the ACC/Big Ten Challenge.

"There's some frustrating moments, and it's not all their fault," Izzo said. "It's just the cards we've been dealt. … I'm asking a lot of these guys. And you know what? I'm going to keep demanding it because that's what we do here."

"We tried everything – inside, outside, we tried pick and roll," St. John's coach Chris Mullin said. "We got enough looks but didn't knock any down. When you shoot 30 percent, you aren't going to win a game."

St. John's: When LoVett was hitting (13 points after halftime), St. John's was right with Michigan State. But the Red Storm struggled most of the game, while Mullin particularly noted the team's eight assists as a sign of how the ball "stuck."

"That's really not the kind of game I want to play," Mullin said.

Michigan State: The performance of Bridges and fellow freshman Nick Ward could be a welcome sign of hope for Michigan State's frontcourt, which is down two big men due to knee injuries. Ward finished with nine points and a season-high 11 rebounds, and the Spartans desperately need more games like that from them going forward.

The Spartans have slid significantly in the AP Top 25 from their No. 12 preseason spot, though they could start climbing again by getting through an Atlantis field that also includes No. 10 Louisville and No. 20 Baylor.

The 6-foot-7 Bridges had a double-double by halftime and finished 9 of 18 from the field, including 3 for 5 from 3-point range. He had three assists and one block in 35 minutes.

"I'm just doing whatever Coach wants me to do," Bridges said. "Wherever he puts me at, I'm trying to create for others, score for myself, rebound. Like I said, if people double-team me, I can get my teammates open. That's what I like to do: I like to see my teammates score more than I do."

Nairn, a 5-foot-10 junior, had scored nine points through the first four games but blew past that with 11 after halftime. He hit 3 of 4 3-point attempts after never hitting more than one in any game in his career.

There was also his highlight-reel moment when he threw down a huge dunk in transition to thrill the large gathering of family and friends on hand to catch his return to the Bahamas.

St. John's: The Red Storm will face VCU on Thursday in the loser's bracket on Day 2 of the three-games-in-three-days event.