Riley Bullough Q&A: 'I will carry this with me the rest of my life' 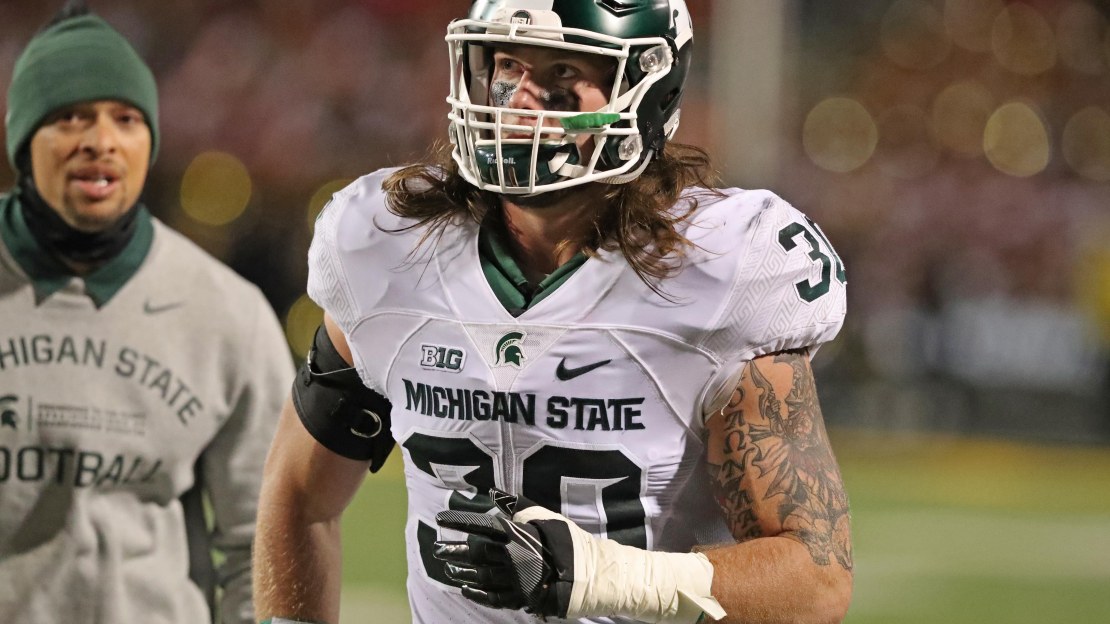 This isn?t how Riley Bullough wanted his senior season to go. Not like this. Not with a losing record. Not without a bowl game. But, that?s the reality that?s staring the star Michigan State linebacker in the face as he preps to play the last two games of his Spartan career.

The 6-2, 227-pound Traverse City, Michigan, native is from a Spartan royal family. Bullough is a third-generation Spartan, following in the footsteps of his grandfather Hank (guard, 1952-54) and father Shane (linebacker, 1983-86) who played at Michigan State. His brother Max was a four-year letter winner (2010-13) and three-year starter at middle linebacker for the Spartans. Another brother, Byron, is currently a sophomore linebacker on the roster. And don?t forget about uncles Chuck Bullough (Michigan State, linebacker, 1988-91) and Bobby Morse (Michigan State, running back, 1983-86).

Riley Bullough has done his part to uphold the family name. He has missed three games in 2016 but still has 57 tackles and 6.5 TFLs. Last season, Bullough was tabbed second-team All-Big Ten by the coaches and third-team by the media in helping lead Michigan State to the Big Ten title and playoff berth.

I caught up with Bullough as he prepped for the Buckeyes.

Q: What does it mean to be a Bullough and to play for Michigan State?
A: It means everything. The tradition of my family, it means a lot to us to play here. We feel like Michigan State is part of our identity. I will carry this with me the rest of my life. And so will my other family members who played here. To have that connection is awesome.

Q: Why haven?t things clicked for MSU on defense in 2016?
A: It is really the little things that have been killing us. Maybe guys not getting in their gap, the right coverage wasn?t played, things like that. Those little things you need to do right to be a great team. We have some young guys playing and some others that don?t have much experience, that?s what happens. We are trying to get better.

Q: How big of a relief was it to end that seven-game losing streak last week?
A: It was huge, mainly for the confidence of our guys. Losing seven straight can be tough. You start to lose confidence. We just needed that one game to turn it around. Hopefully we can gain confidence from last week and use it moving forward.

Q: After watching film, what do you think of Ohio State?
A: I think they look extremely athletic. They have some new guys playing who we didn?t play against last year. They look like a typical Ohio State team, big athletic guys who can move. It will be a challenge. And when you have a quarterback like J.T. Barrett who can throw and run, that presents a challenge in itself. But we have a good game plan. We will come to play Saturday.

Q: You upset the Buckeyes last year. Why not again?
A: That is our mind-set. We are confident. We have to believe we can win. That is the first step. If you don?t believe that, you have no shot on game day. We try to tell the guys to be ready, be confident and have fun.

Q: Who is the toughest guy on your defense?
A: I?d say me. We have some tough guys. Chris Frey comes to mind. We have played a lot together. Guys like Demetrious Cox and Montae Nicholson on the back end are tough guys, too.

Q: Who is the hardest hitter on the Spartan defense?
A: I want to say myself, but I will say Montae (Nicholson). He will come down hill and hit you. To have that behind me is awesome.

Q: If you had to pick one teammate to take to a street fight with you, who would you choose?
A: Demetrious Cox. He?s a black belt, so he probably could use some of that.

Q: When you scrimmage, who?s the most difficult guy to tackle on your offense?
A: LJ Scott is the first guy I think of. He?s a big back who also can move. I think back to my freshman year with Le?Veon Bell and I was on scout team. I think they are pretty similar, the way they look, the way they move.

Q: Who is the best player you?ve gone against in 2016?
A: I missed a few games, but I think (Notre Dame?s) DeShone Kizer will be a great NFL player. He has all the talent in the world. And we see a lot of good ones in the Big Ten each week

Q: When it?s time to eat out in East Lansing, what?s your go-to spot?
A: I have to say Rice Kitchen, my favorite Chinese place. Me and my buddy order it about every other night. We love it. Sesame chicken, fried rice, egg rolls ? had it last night.