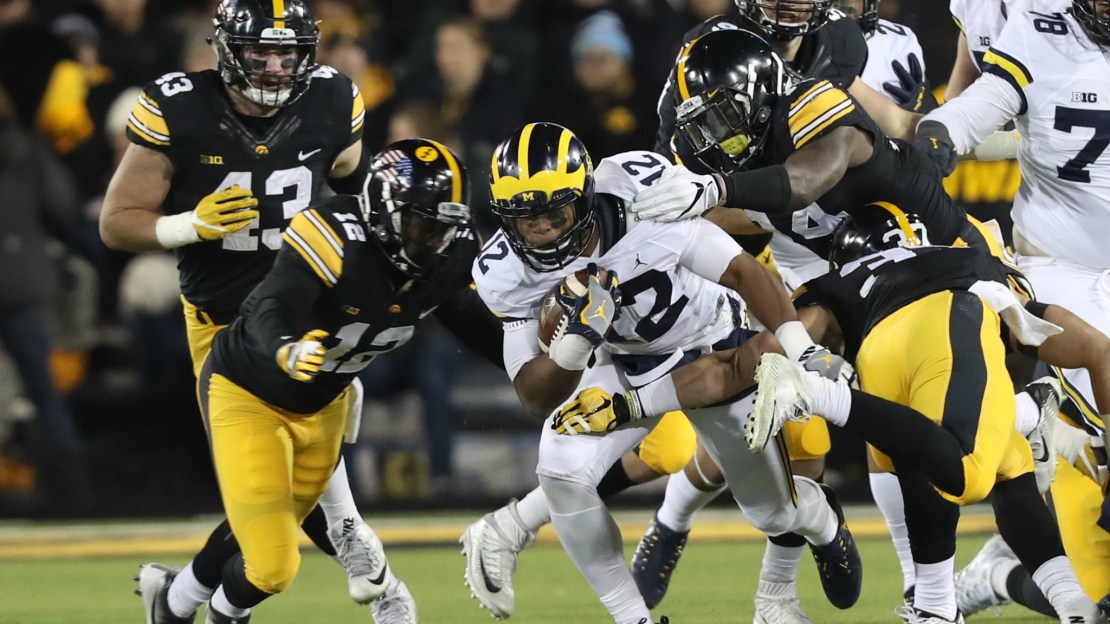 Welcome to the penultimate week of the Big Ten schedule. And the stakes continue to get higher and higher, as the margin for error for division contenders decreases with the finish line in sight.

Best game: Not many games jump out. So, let?s go with Northwestern at Minnesota. Neither team controls its destiny in the West. Still, both are jockeying for bowl position and cling to faint West division hopes. And these are two of the better coaching staffs in the Big Ten.

Best quarterback matchup: Indiana?s Richard Lagow vs. Michigan?s John O?Korn. The Houston transfer figures to start with reports that Wilton Speight will be out with injury. Lagow has delivered on his promise since arriving from a JC, but interceptions have been an issue. O?Korn is stepping in for Speight. The 6-4, 215-pound O?Korn has played in six games this season-hitting 13-of-18 passes for 114 yards with two TDs–after sitting out 2015 after transferring from Houston. O?Korn appeared in 20 games over two seasons at Houston, making 16 starts. He threw for 34 touchdowns and 4,068 yards as a Cougar, setting freshman program records for touchdowns (28; No. 1 among all freshmen nationally) and completions (259) in the fall of 2013.

Best head coach matchup: Ohio State's Urban Meyer vs. Michigan State?s Mark Dantonio. Meyer has his Buckeyes rolling, but they don?t control their fate. The Spartans are coming off their first Big Ten win and Dantonio is a top coach who is looking to upset OSU for a second season in a row. If he does it this week, it will be one of the biggest upsets in recent Big Ten annals. These two are the gold standard of Big Ten coaching, as OSU and MSU have won the Big Ten each season since 2013. Michigan State in 2013 and 2015; Ohio State in 2014. And the Buckeyes won the league in 2009, while the Spartans won a share of the 2010 crown. Want more? These two have the only two playoff berths from the Big Ten, with Meyer guiding the Buckeyes to the 2014 national title and Dantonio earning a playoff bid last year. Dantonio and Meyer are 2-2 vs. each other.

Best coordinator matchup: Indiana OC Kevin Johns vs. Michigan DC Don Brown. Johns pushes the buttons on an exciting offense that needs to limit turnovers if it wants to have any shot at the upset. Dr. Blitz's defense at Michigan is among the best in America, an aggressive unit that will get after Richard Lagow and likely force multiple turnovers.

Best chance for an upset: Honestly, it?s difficult to envision any upsets this week. Could Michigan State perhaps dump Ohio State for a second year in a row? The Spartans are coming off a win. Still, the Buckeyes are rolling coming off back-to-back 62-point efforts. Any way Indiana could shock Michigan? The Wolverines are coming off their first loss of the season and are breaking in a new QB. And IU has given Michigan fits in recent years.

Best matchup: Northwestern offense vs. Minnesota defense. The Wildcats have a great triumvirate in QB Clayton Thorson, RB Justin Jackson and WR Austin Carr. The Gophers are No. 4 in the Big Ten in total defense (353.0 ypg).

Player on the spot: Michigan QB John O?Korn. He figures to make his first career start if reports about Wilton Speight being injured are accurate. Many thought O?Korn would win the job in camp after sitting out 2015 following his transfer from Houston. O?Korn is a talented passer who turned heads while at Houston. Now, the pressure is on as he takes over a team that has Big Ten East, Big Ten and national title hopes. The Wolverine offense struggled last week, as Speight hit just 11-of-26 passes for 103 yards with a pick in the loss at Iowa. With the Wolverines unable to pass, they couldn?t run and had just 98 yards on 35 carries en route to a season-low 201 yards of offense.

Last season, the Spartans invaded Ohio State and knocked off the No. 3 Buckeyes, 17-14, with backup Tyler O?Connor at the controls. The loss effectively killed Ohio State?s Big Ten and national title hopes while helping propel the Spartans to the Big Ten championship and playoff bid. No doubt, the Buckeyes haven?t forgotten. Check this out: Ohio State has won its last five trips to East Lansing, last losing in 1999. This year?s clash lacks the stakes or pizzazz, as MSU is 3-7 and OSU no longer controls its destiny in the Big Ten East.

The visit from Wisconsin will be daunting for Purdue. The Badgers-Boilermaker series has been a real-life Roadrunner vs. the Coyote episode. Wisconsin has won 10 in a row and 12 of 14 ? often in crushing fashion: 62-17 ? 41-10 ? 37-0 ? 34-13 ? 38-14. Purdue hasn?t beaten the Badgers in West Lafayette since 1997 (Joe Tiller?s first season), losing six in a row in Ross-Ade Stadium to UW. Expect another blowout. The Boilermakers have lost five in a row and are woefully undermanned. Conversely, the Badgers have won four in a row and have their sights set on winning the West.

Iowa is flying high as it comes off a huge 14-13 win vs. Michigan. Illinois is coming off a 48-3 beat down at Wisconsin. The Hawkeyes have beaten Illinois seven of the last eight meetings. The last Fighting Illini victory came in 2008, a 27-24 win in Champaign.

Rutgers-Penn State could be blossoming rivalry, though the Nittany Lions are 24-2 all-time vs. the Scarlet Knights and have won nine in a row. RU almost beat Penn State in its first Big Ten game, falling 13-10 at home in 2014. The Nittany Lions won, 28-3, last year in State College. Penn State is rolling, winners of six in a row and motivated to win out so it can keep its Big Ten East title hopes alive. The Scarlet Knights have lost seven in a row and are the lone team without a Big Ten triumph.

Indiana-Michigan has been fun of late. The Hoosiers made the Wolverines sweat last year in a 48-41 Michigan win in Bloomington. In 2013, Michigan took a wild 63-47 victory in Ann Arbor. And it was 42-35 Michigan in 2010, and 36-33 Wolverines in 2009. The Hoosiers have been oh-so-lose to notching their first win vs. Michigan since 1987. How will the Wolverines respond coming off their first loss of the season? There suddenly are questions about the Michigan offense which now may have to adapt to John O?Korn at quarterback with Wilton Speight reportedly out with a broken collarbone.

Northwestern-Minnesota has been a good series, as the teams have split the last 12 meetings. NU has taken four of the last six but lost the last time in Dinkytown in 2014. NU?s offense is rolling coming off a 600-yard effort at Purdue, while the Gophers look to remain in the hunt in the Big Ten West after falling at Nebraska.

Maryland and Nebraska never have met. The Terps have lost three in a row and are falling apart, getting beaten 59-3 and 62-3 the last two weeks vs. Michigan and Ohio State, respectively. The Huskers look to build off a home win vs. Minnesota to stay on the heels of Wisconsin in the Big Ten West chase.