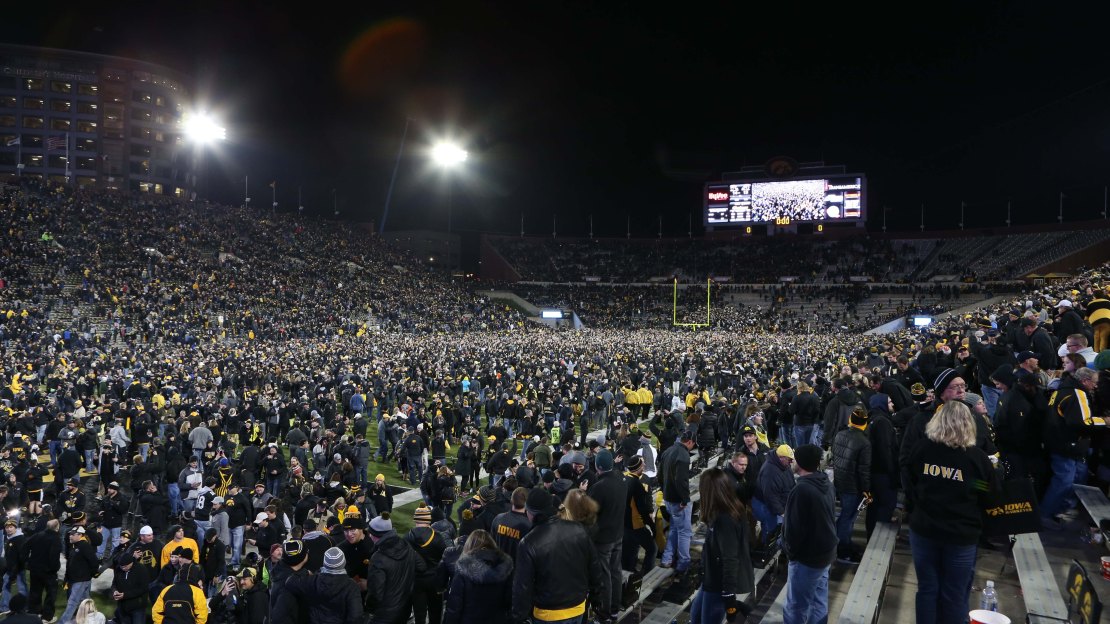 Down goes Michigan. And Clemson ? and Washington.

It was a crazy Saturday in college football, as No. 2 Clemson, No. 3 Michigan and No. 4 Washington all lost, promising big changes in next week?s College Football Playoff poll. It was the first time since October 1985 that three top-four teams lost on the same day.

The only top-four team in last week?s CFP poll to win today? No. 1 Alabama, which beat Mississippi State, 51-3.

The reverberations are profound after former unbeatens Clemson, Michigan and Washington all were toppled. No. 2 Clemson lost, 43-42, at home to Pitt and No. 4 Washington lost at home to USC, 26-13. And Michigan fell, 14-13, at Iowa.

It?s time for everyone to regroup. It?s not too late for Clemson and Michigan to remain in the playoff hunt. But, it may be for Washington, as the Pac-12 lacks strength.

Michigan?s loss rekindled memories of the Hawkeyes? epic win over No. 2 Michigan back in 1985, when a Jim Harbaugh quarterbacked Wolverine squad got the boot when No. 1 Iowa?s Rob Houghtlin kicked a game-winning field goal to win as time expired.

On this night, Harbaugh?s first trip back to Iowa City since that loss, Iowa freshman Keith Duncan did the honors, drilling a 33-yarder as time expired to topple Michigan.

A big winner tonight? Penn State. If the Nittany Lions (8-2, 6-1) win out (at Rutgers and vs. Michigan State) and Michigan loses one more game (vs. Indiana; at Ohio State), Penn State will win the East. Amazing when you consider the Nittany Lions opened the season 2-2. PSU is riding a six-game winning streak and coming off a big win at Indiana.

All is not lost for the Wolverines, who can still win the East-and the Big Ten, along with earning a likely playoff spot. They are now 9-1 overall and 6-1 in the Big Ten, tied with Ohio State atop the Big Ten East standings with PSU. Michigan plays host to Indiana next week, while the Buckeyes play at Michigan State. If each wins, that will set up showdown in Columbus on Nov. 26. If Ohio State wins, Penn State will win the East since it toppled the Buckeyes. If Michigan beats the Buckeyes, the Wolverines will take the East.

Keep an eye on Ohio State should it beat Michigan. Penn State would win the East, but an 11-1 Buckeye team still could maybe earn a playoff spot even without winning its conference or division.

No one saw this stunner in Iowa City coming. The Wolverines began the night averaging 47.8 points and allowing only 10.7. But Harbaugh?s offense never got on track vs. an Iowa defense that allowed 599 yards last week in a 41-14 loss at Penn State. Michigan had just 201 yards of offense with only 98 on the ground. The long run: 12 yards. This again raises questions about a Michigan offensive line that is loaded with veteran talent but can?t seem to dominate consistently. Compounding matters on this night in Kinnick Stadium: Wilton Speight struggled, hitting just 11-of-26 passes for 103 yards with a pick.

Iowa (6-4, 4-3) didn?t do much better on offense, gaining 230. But it was able to run the ball, gashing the Wolverines for 164 yards on the ground. Michigan entered the game No. 2 in the Big Ten in rush defense (107.4 ypg). And the Wolverines were No. 1 in total defense (246.3 ypg). Hawkeye running back Akrum Wadley found plenty of room to roam on the edges of the Michigan defense, running 23 times for 115 yards.

Iowa?s Big Ten West hopes are likely lost. But this win is a nice salve on a season that was headed south. For Michigan, things are now very interesting.

How could next week?s Top Four of the CFB Playoff poll look? Here is a stab at it:

Yes, Wisconsin at No. 4. The Badgers were No. 7 last week. Louisville was No. 6, and OSU was No. 5. Clemson and Oklahoma also could sneak into the Top Four.

In the end, count on the Big Ten champ earning a playoff spot, even if it's Wisconsin or Penn State. The question: Could the Big Ten get two playoff teams? Hmmm.

Bottom line: Hang on. There still is a lot of football to be played.