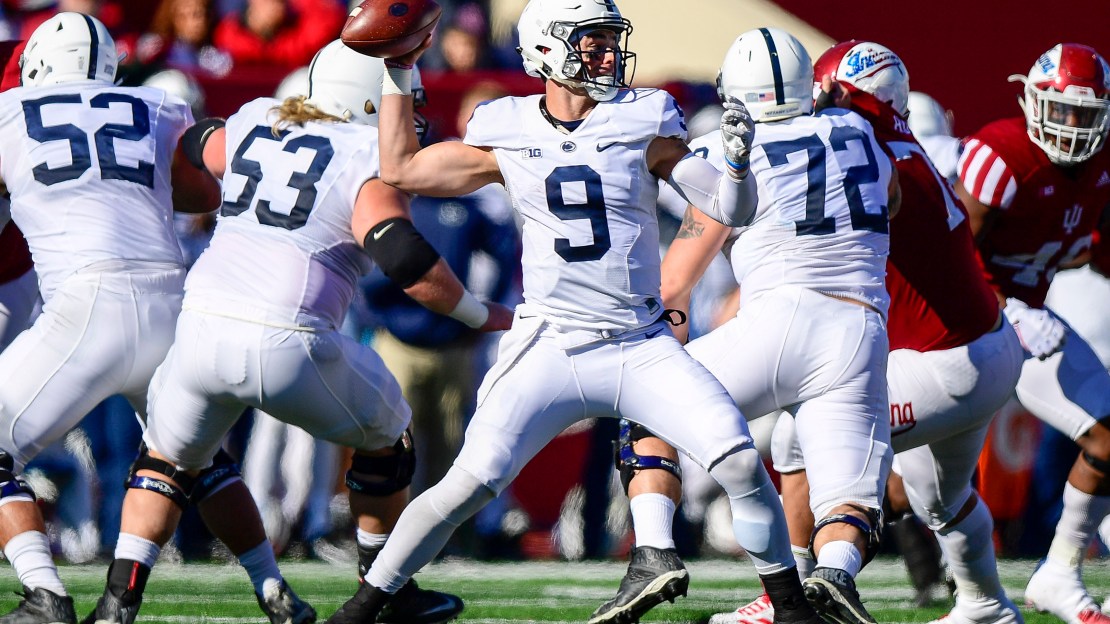 And the wins just keep coming for Penn State.

If you?re scoring at home, that?s six in a row-the first time since 1994 that the program has won six Big Ten games in succession. But this 45-31 victory at Indiana may have been one of the more impressive of them all for what has become one of the most surprising teams of the 2016 season.

?It was a gutsy, gutsy win on the road,? said James Franklin, who went 14-12 his first two seasons in State College, Pennsylvania. ?You look at our wins, every win is different. When you have a young, developing, growing team, that?s an important trait, finding different ways to win. That?s what this team is doing right now, so I?m proud of them. I really am.?

Franklin should be proud. On this day, not much was going right for Penn State, especially on the offensive side of the ball. But the Nittany Lions never wavered, buckled or relented.

Time and again, the Nittany Lions were stuffed. Injuries on the offensive line resulted in a PSU front that struggled to get a consistent push. Left tackle Paris Palmer left the game early with injury. The staff moved left guard Ryan Bates to left tackle and Derek Dowrey and Steven Gonzalez received snaps at left guard. The line already was without right tackle Brendan Mahon, who was hurt last week. And that led to some tough sledding for star Saquon Barkley, who entered the game as one of the nation?s hottest backs.

Barkley never faltered in the face of a relentless Indiana defense led by stalwart linebackers Tegray Scales and Marcus Oliver. How tough was it? He had 20 yards on 20 carries through the first three quarters of the game, as Penn State trailed 24-21. But with the chips down, Barkley delivered two huge runs in the final 15 minutes.

First up, Barkley ripped off a 4-yard TD run to give Penn State a 28-24 lead. After Indiana regained the advantage on Richard Lagow's 40-yard touchdown pass to Nick Westbrook, Barkley made another statement, running over an IU defender for a 2-yard score with 3:58 left to give the Nittany Lions a 35-31 lead they wouldn?t relinquish.

"What you can't do when you're struggling in the run game is abort it, especially with a young offensive line," said Franklin.

When the dust had settled, Barkley had carried a career-high 33 times for a mere 60 yards and two scores. That comes to 1.8 yards per carry. Barkley entered the game leading the Big Ten in rushing with 1,055 yards (117.2 ypg) and averaging 6.3 yards per tote. Barkley had run for more than 100 yards in three of the previous four games-and had two 200-yard efforts. While his faint Heisman hopes took a hit today, he showed a lot by delivering in the clutch on a day when things weren?t going his way.

Credit also must be given to Penn State quarterback Trace McSorley, who hit 16-of-30 passes for 332 yards with two touchdown throws despite having a bum ankle and being battered around. He actually left the game at one time with injury, yielding to Tommy Stevens. But McSorley delivered some big pass plays for a Penn State offense that entered the game second in the Big Ten with 57 plays of 20 yards or more. On this day, Penn State finished with eight plays of 20-plus yards, including three in a wild fourth quarter in which the Nittany Lions outscored the Hoosiers, 24-7. In fact, PSU closed out IU, 31-7.

?He?s a tough sucker, he really is. I wanted him to take a knee a couple times so we could make a substitution,? Franklin said. ?He kind of waved me off and hobbled down the field. He is tough. He is smart. He is resilient. He's a playmaker. The guys believe in him, they really do. Our guys really believe in Tommy [Stevens] as well. We really have a fortunate situation. We?re blessed.?

McSorley is a special quarterback who is made to run the spread attack of first-year coordinator Joe Moorhead. Physically, McSorley (6-0, 205) is nothing like the guy he replaced in Christian Hackenberg (6-4, 228), a second-round NFL pick last spring who left a year early. But the sophomore?s run-pass ability is a nice fit for this attack. And his intangibles make him special. McSorley is tough, he?s gritty, he?s a steely leader with that elusive ?it? factor that coaches desire in their field generals.

The win means Penn State still has a shot to win the Big Ten East-albeit a long shot. The Nittany Lions need to win out with games at Rutgers and vs. Michigan State. And Penn State also needs Michigan-which it lost to 49-10 in the Big Ten opener-to lose twice. The Wolverines finish the season at Iowa, on Saturday night, vs. Indiana and at Ohio State.

Even if they don?t win the Big Ten East, the Nittany Lions looked primed to likely land a sweet postseason slot in a New Year?s Day Six Bowl. Not bad for a team that began the season 2-2 and began this turnaround with a wild OT home win vs. Minnesota. Penn State entered the game No. 10 in the College Football Playoff poll. How high will it go?

?They were blitzing almost every play, extending almost every play,? Franklin said. ?We didn?t make plays on the perimeter early in the game. Either we could have thrown better balls or just didn?t make plays. In the second half, we were able to do that and it opened it up. They were putting the corners on an island and playing a high-risk, high-reward defense. With an inexperienced [offensive] line not playing the positions that they normally play, it was a good plan on their part. In the end, we found a way to get a win on the road. It?s hard to do.?

Yes, it was VERY hard to do. And it also was very impressive for a Penn State team that continues to surprise-and win. No one should want to play this team now.