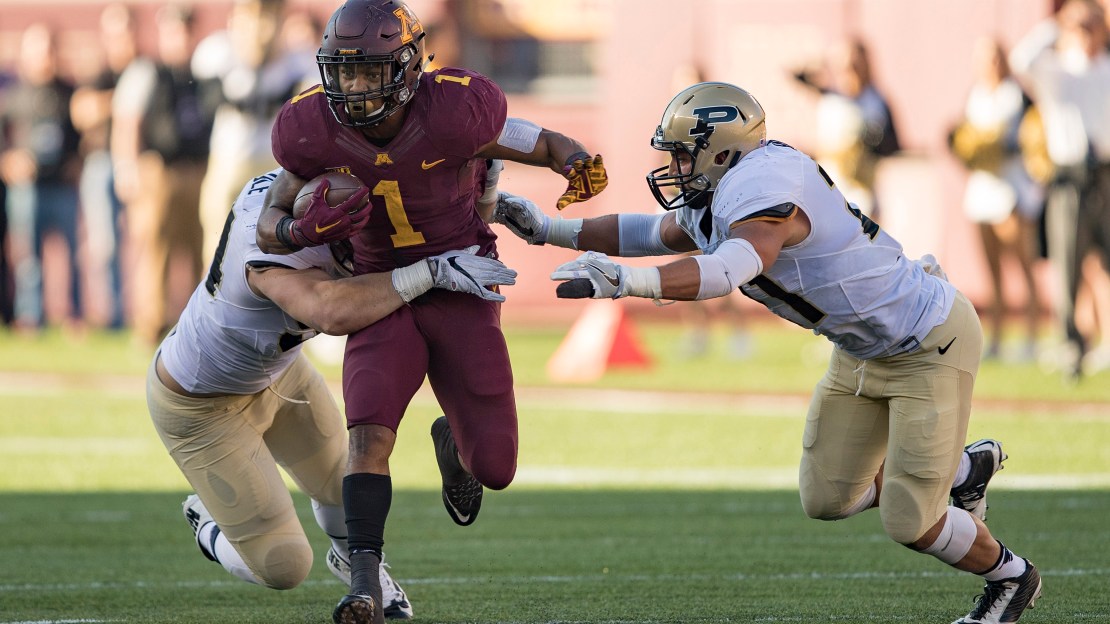 (AP) After an 0-2 start in the Big Ten, the Minnesota Golden Gophers have fought their way back into the race for the West Division title. Here's where it starts to get interesting.

The Gophers (7-2, 4-2 Big Ten) opened conference play with an overtime loss at Penn State and a home loss to Iowa. But they've rattled off four straight wins over admittedly lesser foes – Maryland, Rutgers, Illinois and Purdue, who have combined for five conference victories this season.

Now the schedule gets tougher, with road games at Nebraska and Wisconsin sandwiched around a visit from Northwestern. Minnesota can win the Big Ten West if it wins out, which seemed and unlikely position for them to be in four weeks ago.

"After our first two conference games nobody gave us a chance … to be in here," Gophers coach Tracy Claeys said. "They kind of said the season was over. We just kept battling one game at a time and we fought our way back into this thing."

Smith and Leidner put the points on the board on Saturday, but the Gophers' resurgence in the past month and against Purdue was due in large part to its defensive effort. Trailing 28-23 at halftime, Minnesota forced three second-half turnovers, and the offense turned each of them into touchdowns as the Gophers outscored the Boilermakers 21-3 in the second half.

"We can't keep beating ourselves like that. It's frustrating," said Purdue quarterback David Blough, who threw four touchdown passes in the first half but was held in check after the break. "They gave us every single coverage in America in the second half, they kept throwing wrenches in (our offense)."

Purdue (3-6, 1-5) again was competitive but continued to be plagued by second-half woes in its third game since head coach Darrell Hazell was fired. The Boilermakers have been outscored 83-10 in the second half in their last three games.

"It puts tears in my eyes not to be able to get them to a point they can finish," Purdue interim coach Gerad Parker said. "Thought it was a chance for us, got into the third quarter and had a chance to win the game. We got to do that and relay to them it's not okay to finish short and just be close."

As Purdue tries to regroup, Minnesota gets ready for the most important stretch of its season, beginning with a game Saturday night at Nebraska. That leaves little time to celebrate its recent success.

"It feels good, but we have bigger goals," Smith said. "This week is a big week coming up for us and we know that."

Purdue receivers racked up more than 100 yards after the catch in the first half thanks to two long touchdowns off short passes. In the first quarter, Cameron Posey caught a ball one step ahead of Minnesota safety Damarius Travis and ran the last 60 yards untouched for an 89-yard touchdown. De Yancey later shook off a tackle and ran the last 45 yards of a 60-yard touchdown play

"You never know until you get into the games how you're going to match up," Claeys said. "Speed's hard to tell on video – it really is. So after those two big plays we went to more safety help on them."

Minnesota linebacker Nick Rallis was ejected after being called for targeting in the fourth quarter. He'll miss the first half of the Nebraska game as a result. Replays appeared to show that Rallis made a clean hit with his shoulder but the replay official confirmed the ejection.

That was the sixth targeting call against the Gophers, and though Claeys admitted to frustration over the inconsistent way the rule has been interpreted and implemented, he knew better than to say anything about it after the game.

"I would add more but Christmas is coming up and I would much rather use my money on Christmas presents than send it to the Big Ten," he said.

Purdue: Blough ended the day with 391 passing yards, the fifth time he's passed for 300 yards this year. . Yancey and Posey each topped 100 receiving yards with a touchdown for Purdue

Minnesota: Smith topped the 100-yard mark for the fourth straight game and sixth time this season. . Gophers running back Shannon Brooks missed the game due to an unspecified injury. . Minnesota rushed for five touchdowns for the second straight game. . Sophomore Emmit Carpenter became the first Gopher in 19 years to kick two 50-yard field goals in a game. Carpenter converted from 52 and 53 yards in the first half. . Sophomore linebacker Blake Cashman, a walk-on filling in for two injured teammates, finished the game with two sacks.

Minnesota travels to Nebraska for a Saturday night clash with the Cornhuskers.