No. 8 Wisconsin get first win at Northwestern since 1999 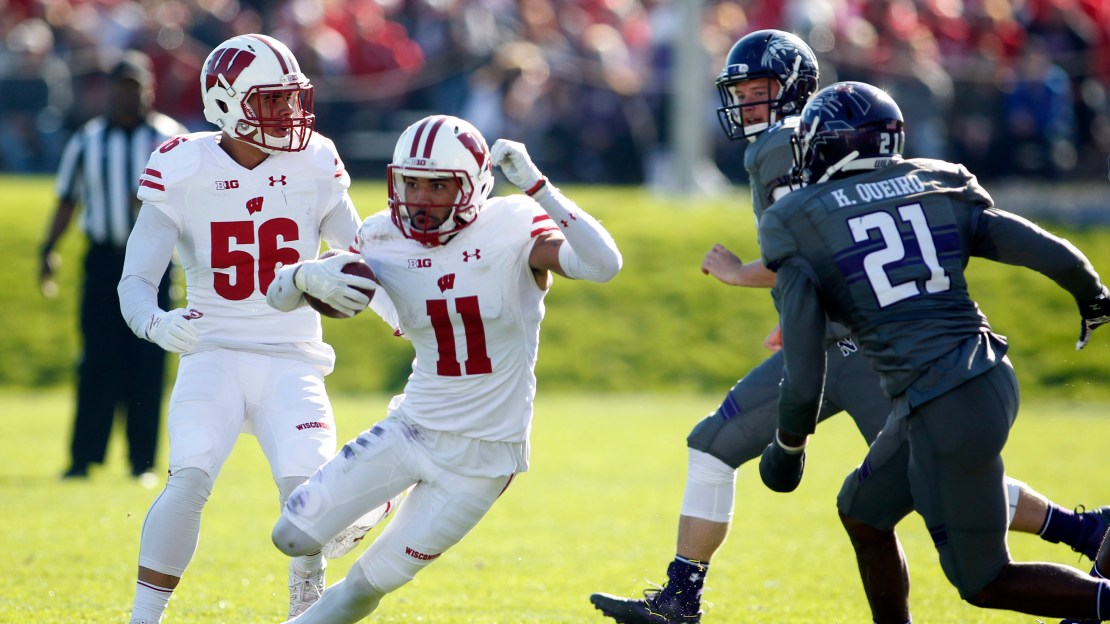 (AP) It wasn't just about building on a huge victory and a return to the Top 10 for No. 8 Wisconsin. The Badgers wanted to end their recent struggles against Northwestern.

To that end, they also succeeded.

Corey Clement ran for 106 yards and a touchdown, Jazz Peavy scored on a 46-yard run and Wisconsin beat Northwestern 21-7 on Saturday.

Conor Sheehy forced a big fumble when he sacked Clayton Thorson with the Wildcats (4-5, 3-3 Big Ten) threatening early in the fourth quarter.

That led to Clements' 2-yard TD run, making it a 14-point game and preserving the third straight win for the Badgers (7-2, 4-2 Big Ten, No. 8 CFP). They went from beating Nebraska in overtime to picking up a rare win at Northwestern.

"It was just one of those things where I really wanted to beat this team and I'm glad we got to do that," Peavy said.

Northwestern had won six of 10 and four straight at Ryan Field against Wisconsin.

The Wildcats beat the Badgers by six at home in 2014 and came away with a 13-7 victory at Camp Randall Stadium last year in a game where three Wisconsin touchdowns were negated by calls from the officials, who had snowballs thrown at them as they left the field.

"We really had to show who the best team was today and we didn't want a referee to make the game time decision at the end," said Clement, who had 32 carries – three shy of his career high.

Peavy's 46-yarder in the second quarter was the first rushing touchdown of his career. He also had 73 yards receiving and a 24-yard punt return.

The Wildcats lost again to a Top 10 team after coming up short in a four-point loss at Ohio State last week.

Austin Carr added 132 yards receiving, including a 13-yard TD late in the first half, but Justin Jackson ran for 42 yards.

"I think we're just tired of being close," Carr said. "We want to push through. … When we beat ourselves, we can't beat two teams in the same day – especially against such a good team as Wisconsin."

Wisconsin had not won at Ryan Field since 1999. But several big plays by Peavy and a fumble recovery by D'Cota Dixon with Northwestern threatening early in the fourth helped change that.

The Wildcats drove to the 19 early in the quarter, but got pushed back to the 30 by a holding penalty against Eric Olson and a 1-yard loss for Jackson.

Things only got worse for Northwestern on the next play when Thorson fumbled as he was sacked by Sheehy. Dixon returned the recovery 22 yards to the Wildcats 45, and Clement ran it in from the 2 . The two-point conversion run by Alec Ingold made it 21-14 with 8:51 left.

Wisconsin: The Badgers solidified their standing in the Top 10 by taking out a team that has been playing better after dropping its first two games.

Northwestern: With three games left, the Wildcats will need to finish strong if they're going to make a bowl game.

Northwestern star linebacker Anthony Walker Jr. wore No. 11 in honor of cornerback Matthew Harris, his roommate. Harris got hit in the head making a tackle against Illinois State on Sept. 10 and retired last week.

Walker said he will go back to wearing No. 1.

– Chryst on Peavy's big plays: "Jazz is capable of that. He just needs to keep maximizing opportunities and I thought for most part he did that."

Wisconsin: The Badgers get a bit of a breather when they host struggling Illinois next week.

Northwestern: Like Wisconsin, Northwestern figures to be in for an easier time next week when it visits Purdue.