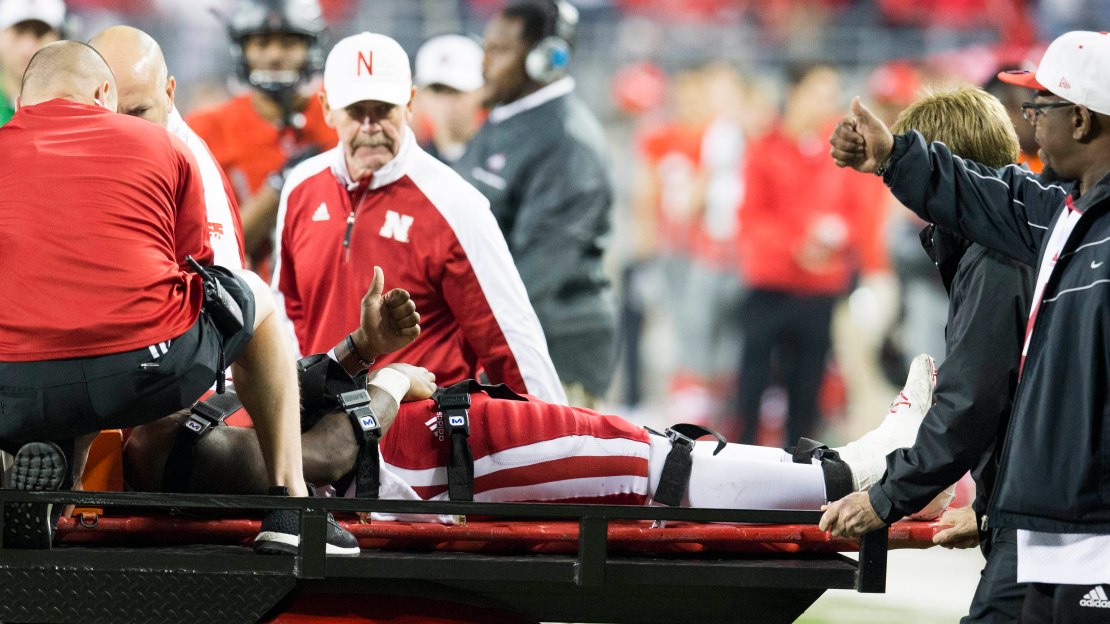 (AP) Nebraska quarterback Tommy Armstrong Jr. was carted off the field to an ambulance after he slammed his head on the turf while being tackled near the sideline by an Ohio State player on Saturday night.

Nebraska's football program tweeted that Armstrong was briefly knocked unconscious but was "moving all extremities and talking while on the field." Armstrong was strapped to a backboard and loaded into the ambulance after the tackle by Ohio State safety Malik Hooker. The quarterback returned to the field, in street clothes, to a standing ovation during a timeout early in the third quarter

With Ohio State leading 24-3 at 6:03 in the second quarter, Armstrong was scrambling for a first down when he took a long stride and was hit in the thigh by Hooker. The legal hit sent Armstrong flying and when he landed the side of his helmet bounced off the ground.

Armstrong lay motionless for several minutes while the medical staff attended to him carefully. He was moving his arms and gave a thumbs-up to the Ohio Stadium crowd that chanted, "Tommy, Tommy."

Armstrong, a senior, was 4 for 15 for 74 yards when he left the game. He'd thrown for 1,764 yards, 11 touchdowns and seven interceptions entering the game against No. 6 Ohio State. Backup quarterback Ryker Fyfe took over Armstrong.

Thank you all for the prayers… everything is good and I'm glad to be back with my team. Also thank you @OhioStateFB and the fans.

Here's a look at some of the Twitter reaction to the scary scene Saturday night.

?? sending prayers up for my guy @Tommy_Gun4

You've always been a warrior 4.

We're here for you now @Tommy_Gun4.

Thoughts & prayers from our family to yours, @Tommy_Gun4 ??